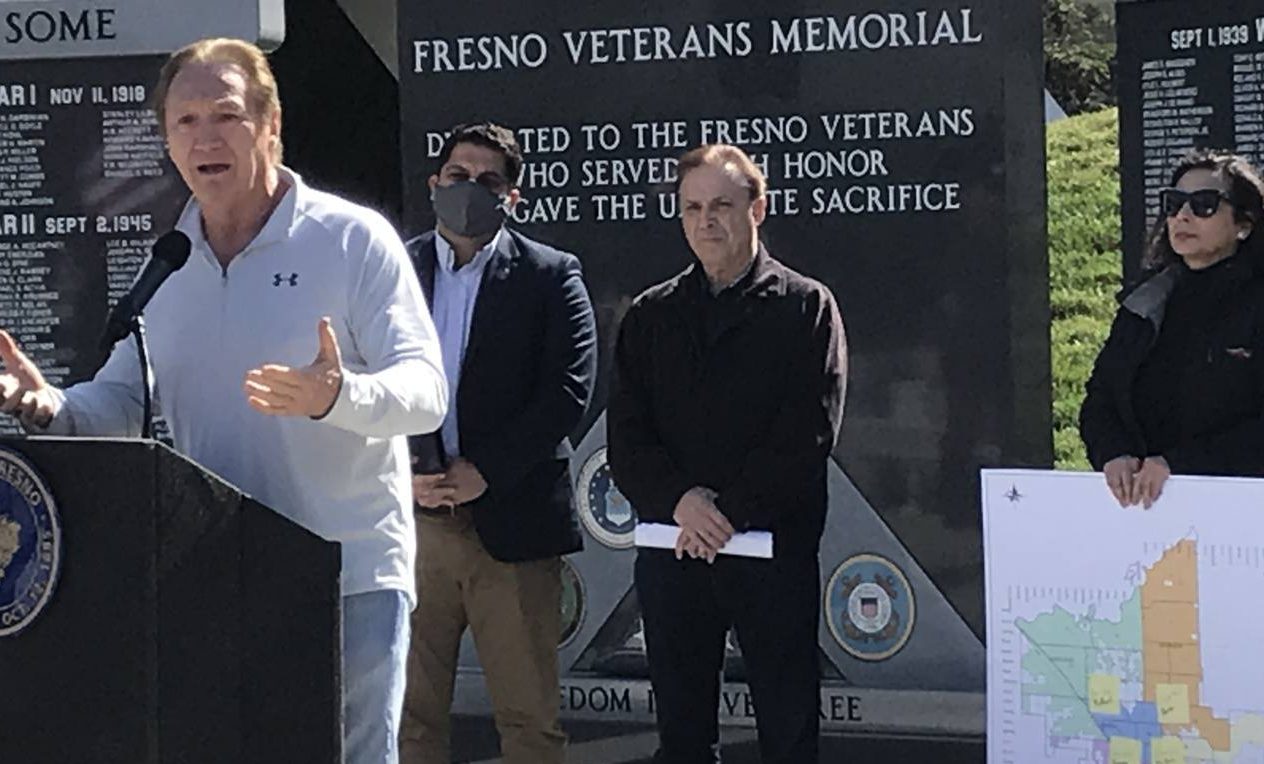 Fresno Unified parents speaking in English and Spanish joined with Fresno city councilmembers, a former Fresno mayor, a School Board member, and other community leaders at a rally Saturday in downtown Fresno in calling for the school district to accelerate the reopening of schools for all students.

Bredefeld, whose northeast Fresno council district is almost entirely in Clovis Unified School District, repeated much of what he has been saying for months at rallies and other events, that data and science and the experience of nearby school districts that have returned to in-person classes have made it clear that Fresno Unified students can safely return to classes.

“The fact is that schools all across the country have been open, some for the past six to eight months, and have had no significant COVID outbreaks,” he said. “Yet Fresno Unified has continued to keep its schools closed, despite the fact that private schools locally have been open for many months with no significant problems, as has Sierra Unified and other school districts.

“We know that schools are critical in the emotional, social, and academic well-being of our children. Schools provide a stable environment for kids to develop social and interpersonal skills and peer relationships, they learn how to interact in groups, make decisions, develop support systems. This has not been able to occur with online learning.”

He criticized the district’s announcement this week of a return to school in April as a “fake reopening plan.”

Fresno Schools Will Have Limited Reopening

Fresno Unified Superintendent Bob Nelson announced Monday that elementary students and one secondary grade will be returning for in-person instruction on a hybrid schedule starting April 6, so long as Fresno County is in the red tier for substantial risk of coronavirus spread. The district had renegotiated an agreement with the Fresno Teachers Association that was keeping students on distance learning until the county hit the orange tier for moderate risk. Fresno County has been in the purple tier for widespread risk since last fall.

Under previous state and local health protocols, districts were limited on reopening during the purple tier, although under the new state rules districts are being encouraged to resume in-person instruction for transitional kindergarten through second grade in that tier and all elementary students and one secondary grade in the red tier.

In addition to criticizing the Fresno Unified School Board and Nelson, Bredefeld slammed the local news media outlets that weren’t on hand to cover Saturday’s rally as well as reporters who asked “softball” questions during Nelson’s online news conference Monday. He noted that Nelson referred to them as the district’s “media partners.”

“I did not know the media was the school district’s partners, yet not one media person objected,” he said. “I wish the media treated me as a partner. I don’t get that kind of treatment from the media.”

Bredefeld was joined at the microphone by Alan Autry, who said he was speaking not as the city’s former mayor but as a concerned grandparent who is seeing firsthand the impact on his 10-year-old grandson. Parents and guardians who have had to become teacher’s aides to their children and turn over a portion of their homes into classrooms should be compensated, he said, drawing cheers from the crowd.

Autry urged Bredefeld and City Councilmember Mike Karbassi to lobby state legislators to pass laws providing stimulus money to parents for taking on the role of educators during the pandemic.

“Have you gotten any compensation for that? I’m proposing here today, at least twenty five hundred dollars per child, the state, the district should provide to those parents per child. And if you have a special needs child, that should be three thousand dollars per child to go to you to compensate, because you’re uncompensated employees of the school system,” Autry said as the crowd cheered and applauded.

Instead of cheers, Karbassi, who represents northwest Fresno, drew jeers as he began to speak while still wearing a mask and then was queried about how public comment has been stifled at City Council meetings.

After he was interrupted repeatedly, Karbassi turned away from the microphone but was stopped by Bredefeld, who then told the crowd that they needed to treat Karbassi with respect because he, unlike other local and state elected officials, had chosen to attend the rally.

“This man is standing here, and you’re insulting him, and I don’t like it,” Bredefeld said.

Several parents gave testimony about the impacts of keeping schools closed and how desperate students and parents are for them to reopen. Parent Mia Zavorek was engulfed in tears when she talked about the impact that the closed schools have had. Zavorek said that her own daughter was beyond excited when she heard that Fresno Unified schools will reopen in mid-April.

“And I don’t have the heart to tell her, she’s in the eighth grade, I don’t think that’s going to apply to her,” Zavorek said.

Parent Juan Esquivel, whose four children attend Fresno Unified schools, spoke in Spanish about the importance of parents banding together now to show their support for reopening schools so children can get the education they need to be successful in the future.

“If we don’t stand up now, this generation, we’re not going to have any future attorneys, any future doctors, any future police officers, any future anything that would stand up,” he said in Spanish as another speaker, Monica Diaz, translated into English. 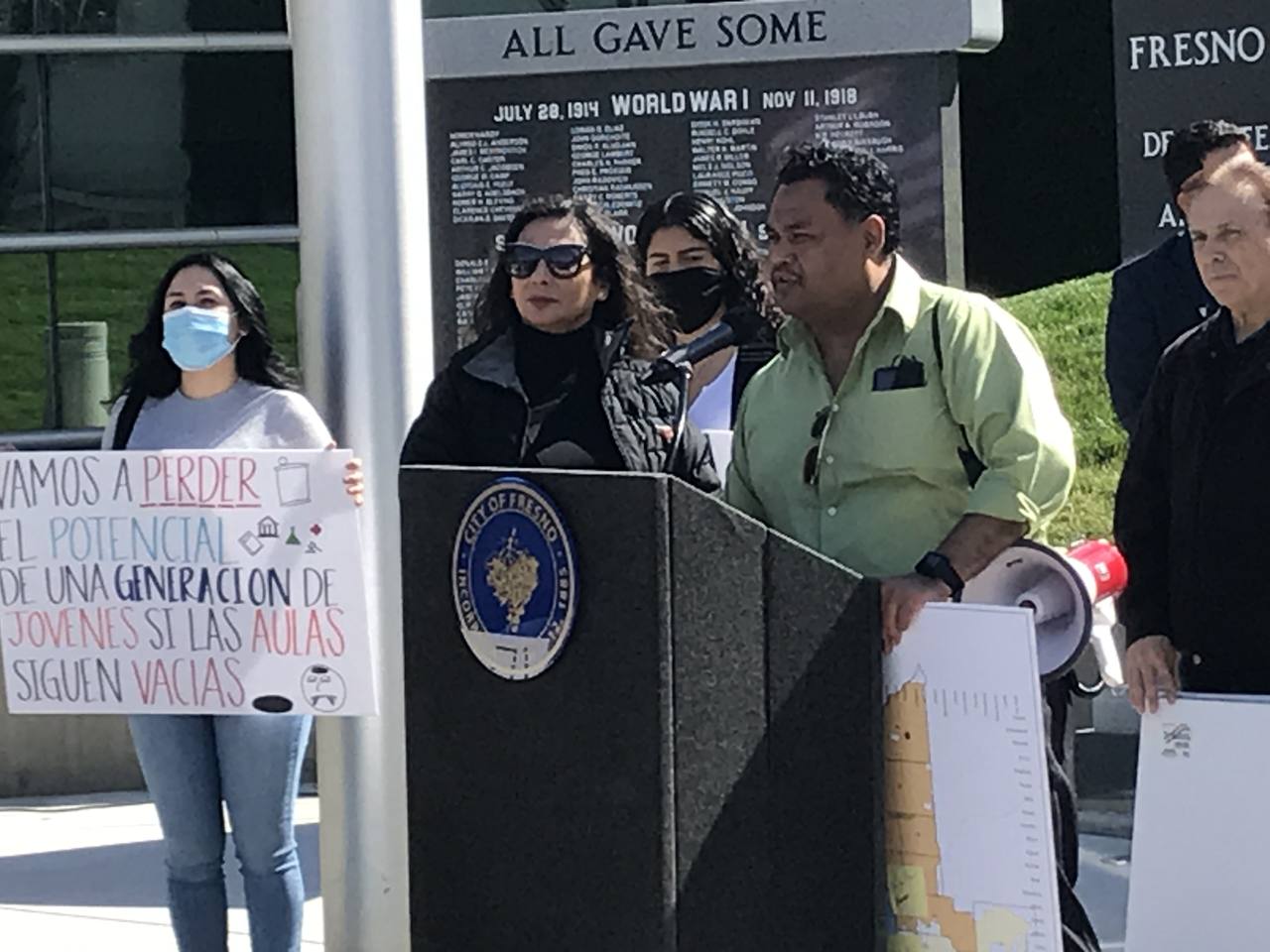 The rally took on a political bent as several speakers said the community needs to put pressure on the School Board members now, and also run as challengers when the trustees are next up for election. Parents Danielle Loucks called out trustees by name, three of whom just won reelection in November and three of the four who will be up for reelection in 2022.

“These elected trustees have not met in person for nearly a year,” Loucks said. “Questions that have been submitted through the procedure that they outlined on the district website go unanswered. I think the board members have, quite frankly, forgotten who they work for.

“They work for us, the students and the families of Fresno Unified. In a private sector, these members would have been fired by now.”

Trustee Terry Slatic, who represents northwest Fresno and who was the only School Board member at the rally, should be spared, she said.

Marcelino Valdez Jr., who worked with Bredefeld to organize the rally and who recently created a Facebook group, Parents for Re-Opening Fresno Unified, said he has aimed at keeping the group from becoming partisan.

“This is a nonpartisan issue that affects all of our families. It affects our future,” he said. “The group that we formed, we make sure that we welcome everyone. If you’re a Democrat or Republican, an independent, I don’t care if you worship unicorns, you’re welcome in our group.”

Parents need to band together to make their voices heard by local elected officials, whether they serve on the School Board, City Council, or state Legislature, Valdez said: “We need more involvement. We need your commitment that you’re going to take those next steps … make noise. The squeaky wheel gets the grease.” 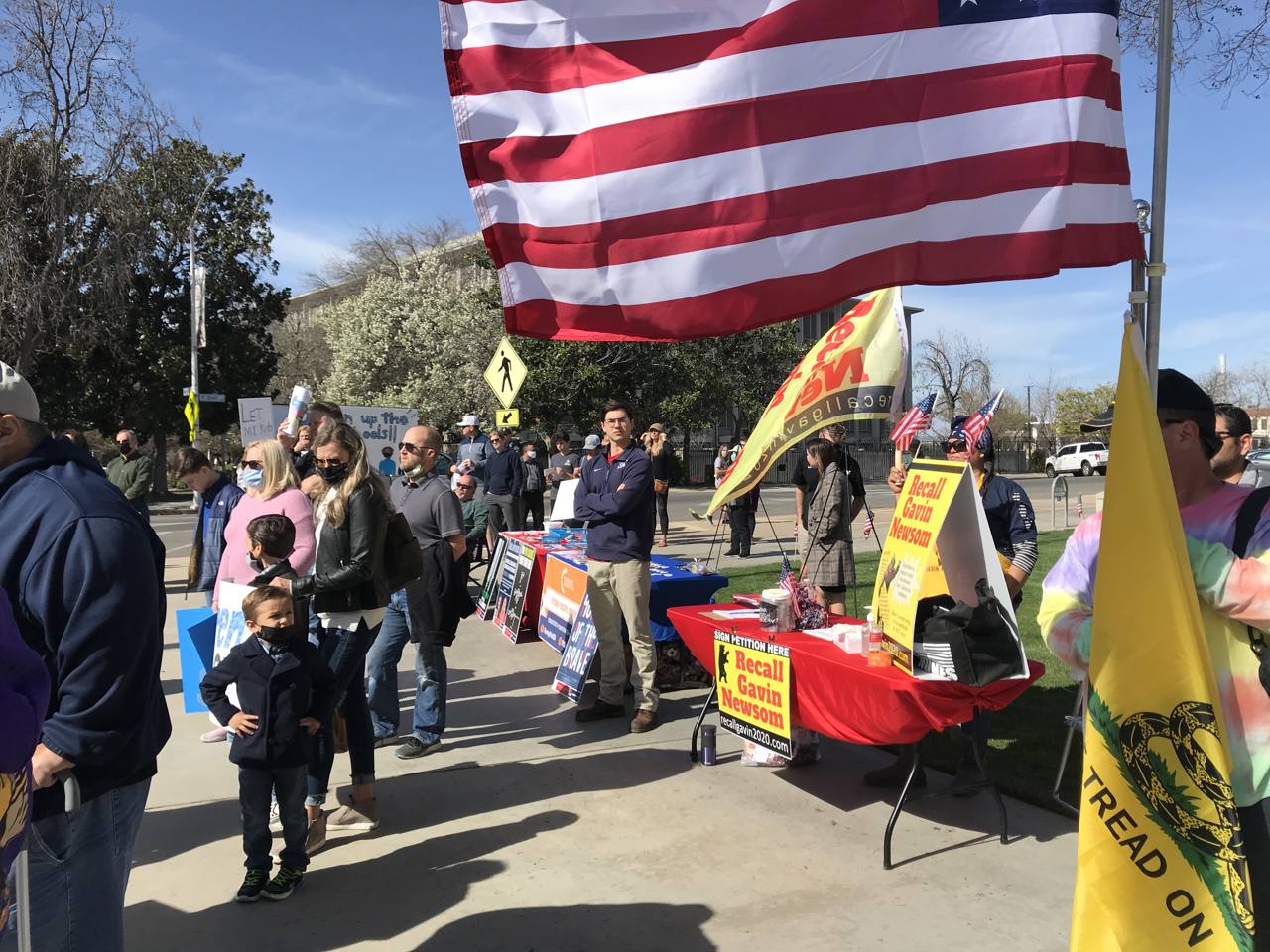