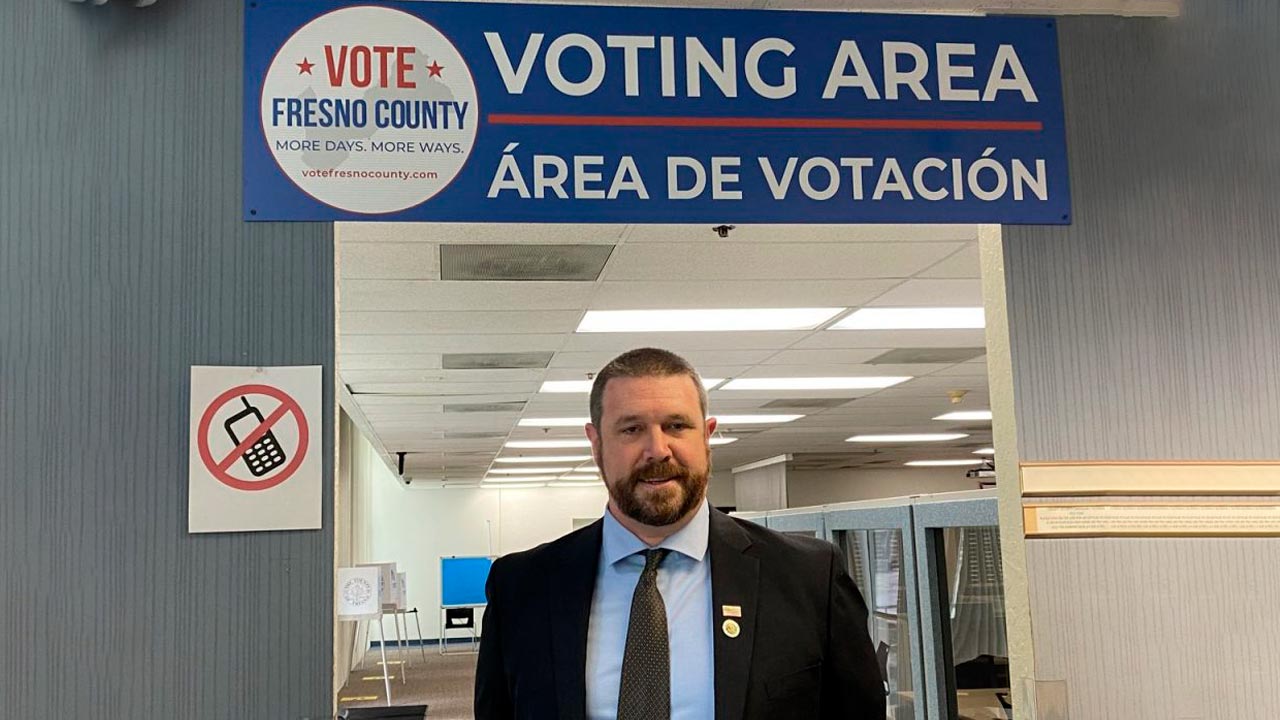 Just minutes earlier, the Fresno County Board of Supervisors named Kus the new County Clerk and Registrar of Voters.

He is replacing Brandi Orth, who is retiring at the end of the week. As an elected position, Kus (pronounced like it rhymes with goose) will fulfill the remaining two years of Orth’s term. The next election is June 7, 2022.

Kus will officially take over on March 1, pending a final background check. Last month, Orth announced she was retiring at the end of February. She plans to move to North Carolina to take care of her ailing mother.

In her resignation letter, Orth recommended her top assistant, Kus.

According to the county charter, the Board of Supervisors can appoint a successor until the next election. After meeting in closed session for about 20 minutes, the board announced a 5-0 vote for Kus.

“We’re making an excellent choice. James is an experienced election official, he’s non-partisan. He’s been with my office for many years. He’s personable and I think he’ll do a fabulous job,” Orth told the supervisors.

It will be a busy first week for Kus. Next Tuesday, Clovis is holding city council elections and there is a ballot measure in Orange Cove.

“We are just jumping straight into that and making sure that our election for the city of Clovis and the city of Orange Cove runs smoothly … and every vote gets counted,” Kus said.

Started as a Poll Worker

Kus, 47, has been working full-time in the elections division for the past four years in various management positions.

Prior to that, he worked at Fresno State as a consulting epidemiologist and biostatistician

“My original first career was in public health and education. While that may not sound the same as elections, actually it really does kind of blend the same service to people, to the public; the same following the rules and needing the numbers,” Kus said. “So that was a very natural transition.”

In the meantime, he moonlighted in elections part-time as a poll worker and inspector.

Born and raised in Fresno, Kus attended college at Claremont McKenna and John Hopkins in Baltimore, before returning home.

Orth attended the supervisors meeting, as they held a special ceremony for her pending retirement. She is completing 27 years working for the county, the last nine as the elected county clerk.

Supervisor Buddy Mendes praised Orth for transitioning Fresno County into a Voter’s Choice Act county — which provided every registered voter with a pre-paid return ballot and opened voting centers several days prior to an election.

“You were by the book. You treated all people equally. And I think that’s something to be proud of. And when it’s our time to leave, I think our goal is we all want to leave the office better than what we found it. And I definitely believe you can walk out with your head up high,” said Supervisor Brian Pacheco.

Orth said she went out on a high note with a record setting turnout for the November 2020 election.

“We’re doing it all in a pandemic and we kept everybody safe,” Orth said. “People in my department have a passion for elections and for doing it in a transparent and accurate way. I’m really excited that that’s going to continue.”

“I’ve had the wonderful opportunity to work with Brandi and see the amount of hard work and integrity necessary in this position. And I emulate that. I want to do that and I kind of like it,” Kus said of his soon-to-be predecessor. Orth (front) was honored by the Fresno County Board of Supervisors (from left): Nathan Magsig, Buddy Mendes, Steve Brandau and Brian Pacheco.

Kus said he plans to run for the position in 2022. However, he plans to change political parties.

“I am registered as a Democrat, but I really believe that (in) this position, it’s important to be as impartial as possible. I will re-register as nonpartisan,” Kus said.

GV Wire℠ determined at least two others who applied for the position.

Mark Johnson, an attorney and vice chairman of the Fresno County Republican Party, applied. He said he is concerned about election integrity.

“The county clerk’s position is a very important position where we’re interested in honest and fair elections and transparency,” Johnson said. “Half the people in the country questioned our election process right now. And I think the citizens of Fresno County deserve to know that the elections are being run fairly.”

Several speakers advocated for Johnson during pubic comment. He would not commit to running in 2022.

Madera Supervisor to Newsom: ‘Complete the Widening of Highway 99’