A new lawsuit over the sale of the Tower Theatre may accomplish what protesters and compromises offered by city leaders could not do — slow down, if not stop, the sale.

Unless a judge steps in, Adventure Church is expected to complete the sale of the Tower Theatre this week. The sale includes the theater — symbolic not only for its physical nature but what it represents to the Tower District and especially as a welcoming place for the LGBT community — and surrounding properties leased by several restaurants.

For the sixth Sunday in a row, protesters gathered across the street from the theater. Until recently, the church held Sunday morning services there in-person.

On Friday, the owners of Sequoia Brewing Company, a tenant of the Tower Theatre complex that’s up for sale, filed suit in Fresno County Superior Court. Among the claims are breach of contract for failing to notify the brewery of the sale, which would trigger their right to buy the leased building first.

Brewery owners are asking the court to halt the sale.

The lawsuit applies to just the building being leased by Sequoia Brewing, not the theater itself. Only current owner Tower Theater Properties, Inc. is being sued; the church is not. 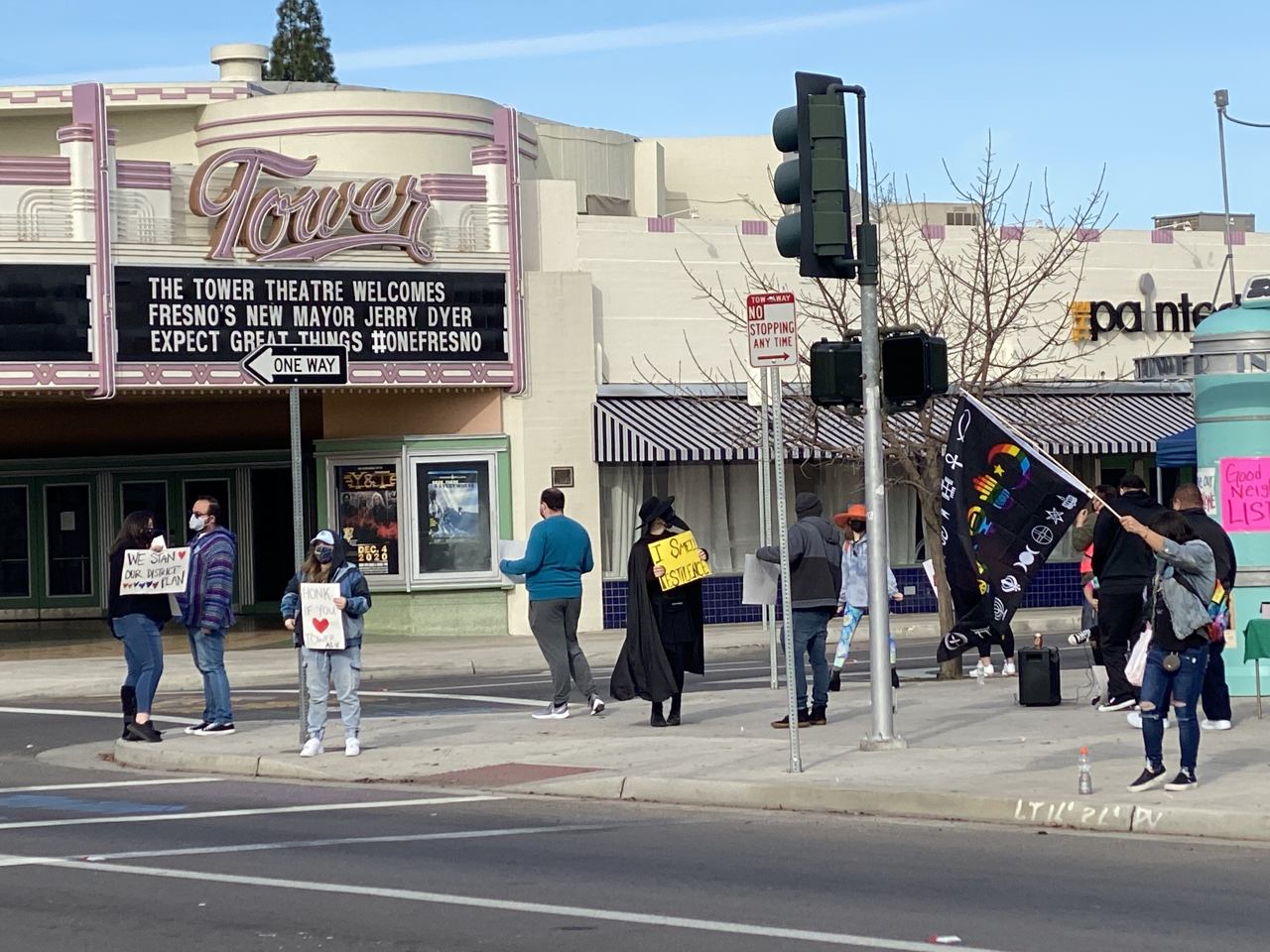 Opponents of the sale have argued that a church holding services at the theater is a violation of city zoning codes. The church’s pastor disagrees with that assessment and has publicly said the church does not intend to apply for a zoning change.

The body of the brewery’s lawsuit does not mention zoning. The legal contention is a violation of lease terms. The contract, signed by Sequoia’s prior owners — Craig Scott Kendall and Michele Kendall — allowed for the right of first refusal and proper notification when the land was up for sale.

“(Sequoia Brewing Company) has the exclusive right to purchase the property on which it operates on the same or more favorable terms as the pending sale to the Adventure Church,” attorneys Seth Blyth, Kimberly Mayhew and Craig Meredith said in a news release.

According to the lawsuit, the owners of the theater had an obligation to notify the Sequoia Brewing within 12 days of the notice of sale. That did not happen, they say.

Furthermore, J&A’s owners, Jeremy Smith and Allison Richtel-Smith, refused to waive their right of first refusal when asked to do so by the Tower Theatre owners.

The 76-page lawsuit contains several letters back and forth between the attorneys, although the terms of the sale are still unknown — a source of frustration for Sequoia Brewing.

The attorneys for the brewery are alleging that the Tower Theatre attorneys are threatening their own lawsuit for interference with the sale.

In an email to Sequoia Brewing, realtor Bill Richardson said church leaders “are open to you exercising your first rights to purchase. After the close of escrow, we will work with you in your pursuit of parceling out the property. Lastly, if your actions today in sending a letter to our lender causes any delays or any obstruction of our escrow, we will pursue legal action with all parties involved.”

As of Tuesday, the lawsuit is still being processed by court officials and no court date has been set.

Pastor Anthony Flores of Adventure Church offered no comment in reaction to the suit. The attorney for Tower Theatre did not respond to inquiries from GV Wire℠ as of time of publication.

In December, Adventure Church notified the city of Fresno that it was in escrow to buy the famed theater. When the information became public, neighbors online and in-person protested the pending sale.

The issue became a cause célèbre, when entertainers Sarah Silverman and Fresno-native Audra McDonald posted about it on social media.

Silverman raised alarms over the perception that the church is not LGBT friendly — an allegation Pastor Anthony Flores has denied in the past.

“The property owners and the current buyers have not been persuaded and have instead elected to press on in defiance and threaten to pursue legal action rather than the traditional application process for permits irrespective of the legal rights of Sequoia Brewing Company, the community and the City of Fresno,” the fundraising page said.

Opponents of the sale are concerned that if the theater becomes a church, it may affect nearby businesses in terms of permits for nightlife and for selling alcohol and legalized cannabis.

The attorneys for Sequoia would not confirm if the donations will be used to fund legal action.

Fresno Mayor Jerry Dyer attempted to broker a compromise, offering the church a lease at the city-owned Memorial Auditorium in downtown Fresno. The church refused the offer, citing its desire to own and not rent property among other objections.