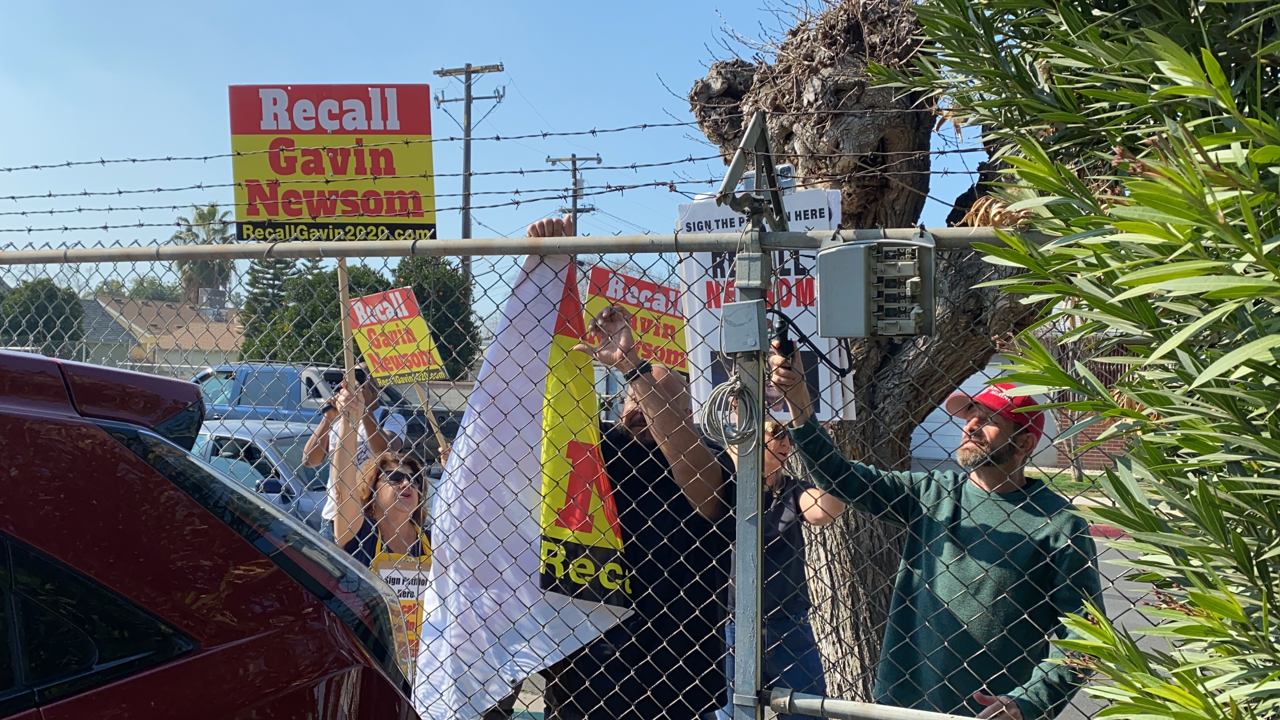 Gov. Gavin Newsom was undeterred by the small group of protesters clamoring for his removal for office during his appearance Wednesday at the Fresno Fairgrounds.

Newsom, who was in Fresno to announce a vaccine site set for Reedley College, once again avoided answering a question about the recall campaign.

“I’m focused every single day on getting businesses open, our schools reopened, increasing the rate of vaccinations, more than triple the daily vaccination rate. We are committed and resolved to do that in every part of the state,” Newsom said.

“I don’t care if you’re Democrat or Republican. I care that you’re healthy and safe and you can live your lives out loud without fear of a pandemic and without fear of having to go back into the fits and starts this pandemic has impacted in terms of communities all across the state. And so that’s my focus,” Newsom said.

Newsom has danced around the recall question when asked by media at his news conferences for the past few weeks. In the backdrop of the Big Fresno Fair play structure, the governor gave a similar response.

“I’m focused every single day on getting businesses open, our schools reopened,” says @GavinNewsom, responding to @TaubGVWire on anger from recall proponents. Again, he doesn’t acknowledge recall movement — though protesters on site yelling “Recall Gavin” as he speaks. pic.twitter.com/Zr1LsH0IGJ

Supporters of the recall say they have collected 1.4 million signatures so far.

The recall will qualify for the ballot with 1,495,709 valid signatures by the March 17 deadline.

Randy Economy, spokesperson for the Recall Gavin Newsom campaign, criticized the governor for not answering questions about the recall.

“It is a sad commentary when Governor Newsom cannot directly answer a question from a member of the media regarding the recall he is facing,” Economy said by email. “The Governor can run from members of the media, he cannot dodge the 1.4 million voters who have already signed his resignation slip.”

“I don’t say that to impress you or anybody, but to impress upon you my passion, my respect, my reverence for small businesses,” he said.

“This pandemic has put pressure on all of us. The state is weathering this pandemic as well or better than most other states in this nation,” he said.

Newsom said he has “empathy and “respect” for struggling small business owners.

“We’re doing everything in our power to get this economy moving again safely. The fastest way to open businesses permanently is to eliminate and end this pandemic,” he said.

Dyer: Not About Politics

Fresno Mayor Jerry Dyer was among several local politicians to have a speaking role during Newsom’s news conference. However, he was the only Republican.

“Regardless of political affiliation, it is important that we as local leaders work with our state leaders. And for me, it means that (Gov. Newsom) came here for the purpose of understanding, to listen. Now, it’s important that whatever we shared with him, that we all follow through on that,” he said.

Dyer called for unity in his speech during the news conference. He stood by his words after.

“In time of crisis, and this pandemic has been a crisis, we can either stand shoulder to shoulder and encourage one another, support each other. Or we can stand divided and and point blame and point fingers at each other. That’s not what we’re doing here today,” Dyer said. “Having the governor here today was a sign that we want to work together, local governments, state, and so that we can get as many vaccines here as possible.” Jerry Dyer speaks at a news conference with Gavin Newsom at the Fresno Fairgrounds on Wednesday. (GV Wire/David Taub)

“It is a sad commentary when Governor Newsom cannot directly answer a question from a member of the media regarding the recall he is facing.” — Recall spokesman Randy Economy

About eight protesters lined up behind the fence at the fairground perimeter but could be heard loudly during the news conference through the use of a bullhorn.

One of the protesters was Josh Fulfer, known for his conservative activism.

A constant “Recall Newsom” chant could be heard, mixed in with heckling.

Newsom did not acknowledge their presence.

“Governor Newsom is conducting a bizarre statewide media tour to announce vaccine distributions and his press events are full of political diatribe and rambling sometimes incoherent responses. Now he is being heckled at his own press events. He needs to focus on getting the job done instead of feeling the need to be in front of cameras 24/7,” said Economy.

About 8 protesters on the fence outside @BigFresnoFair with bullhorn. Chanting recall. pic.twitter.com/QXQ9iZEc5M