‘Tedious, Stressful’: Why Older Californians Are Still Struggling to Get Vaccine 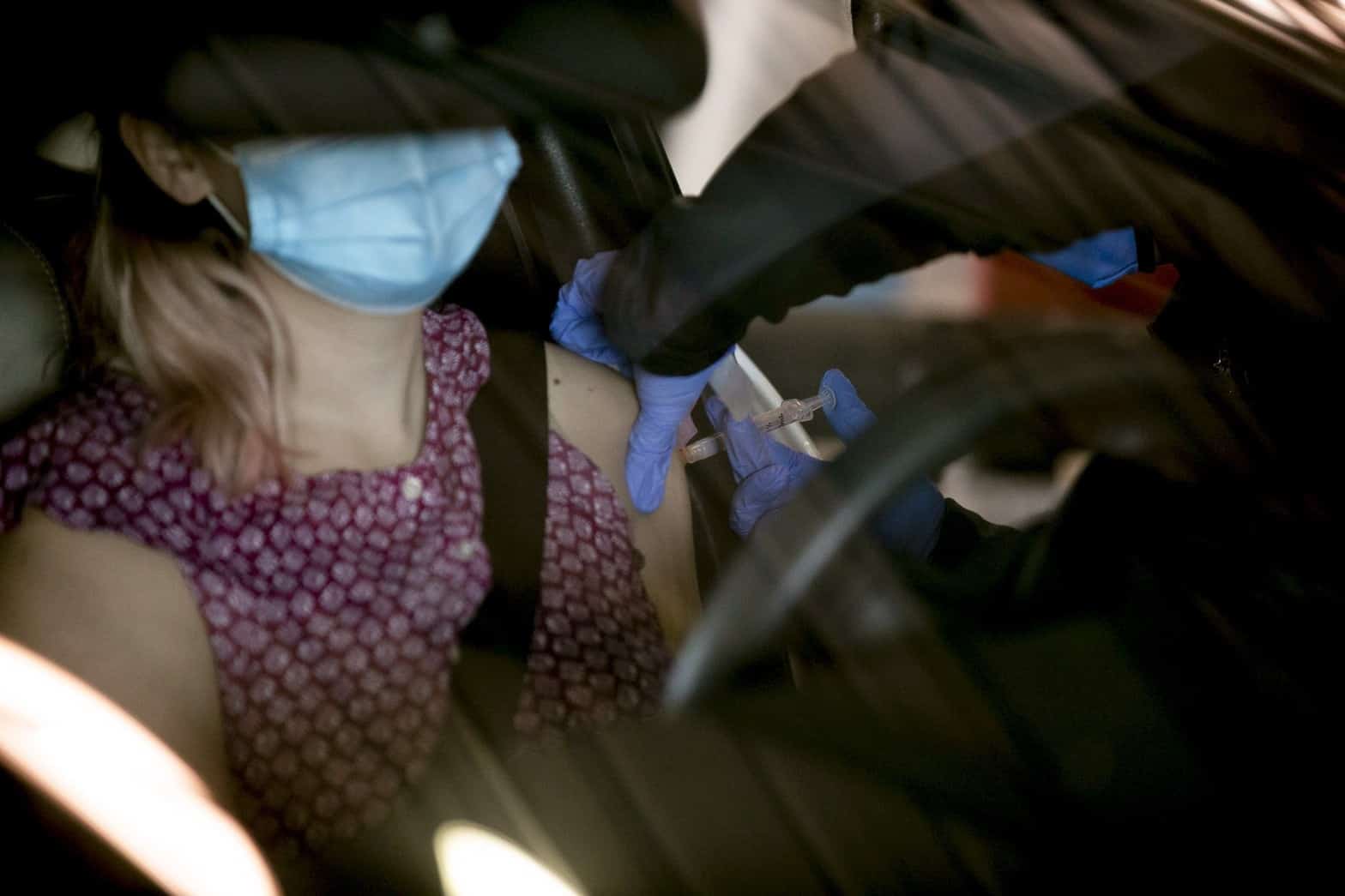 For eight days in a row, David Griffin, 67, woke up at 3 or 4 a.m. to search for a rare, coveted COVID-19 vaccine appointment for himself and his wife, 70, who has multiple sclerosis.

Two slots he found, at a Ralph’s supermarket, were abruptly cancelled. Finally, Griffin secured two appointments next week at a mass vaccination site at Dodger Stadium.

“It’s been extraordinarily difficult,” said Griffin, a Los Angeles general contractor who runs a company that serves people with disabilities. “The process has been tedious, frustrating, stressful and dishonest.”

Griffin’s exasperation is shared by millions of Californians as the chaotic vaccine rollout continues. State officials have drawn widespread criticism for opening vaccinations to everyone 65 or older before local providers were ready with enough vaccine and staff to serve them.

California has consistently lagged behind nearly every other state in its COVID-19  immunization rate, especially large-population states. In California, 4,135 out of every 100,000 residents have been vaccinated, compared with 5,773 in Florida, 5,739 in New York, 5,327 in Texas and 4,502 in Illinois. Only Nevada, Wisconsin and Idaho have a slower pace.

Since vaccinations began nationwide in mid-December, nearly 1.8 million Californians have been vaccinated as of today, according to the state Department of Public Health. Nearly 4 million doses have been shipped to local health departments and large health providers, with some supply reserved for second doses.

California is trying to manage the largest mass vaccination campaign in its history, hampered by inconsistent federal guidance under the Trump administration and inadequate funding for supplies and staff – while simultaneously grappling with one of the nation’s most severe infection surges.

My 75-yr-old dad finally got a vaccine appointment, not through his regular primary care doctor, but through a neighbor’s friend’s sister who happens to work at a big hospital in his area and shared a secret code to get through the online system.

“What we’ve seen over the past year is so little reliable federal guidance that everyone’s learned to fend for themselves. With something this complicated and nuanced, that doesn’t work very well,” said Dr. Bob Wachter, chair of the department of medicine at UC San Francisco.

As in other states, California’s vaccine allotment remains limited while consumer demand soars. When Riverside County released 3,900 immunization appointments online Thursday, they were snapped up in 32 minutes.

State leaders are uncertain about their vaccine allotments after learning last week that a federal reserve supply they had counted on didn’t exist. As a result, health departments and local hospitals may learn of their allotments only a week in advance, complicating the scheduling of appointments.

It’s not just California, though. Other states have faced the same problems. Florida on Thursday restricted COVID vaccinations to permanent or seasonal residents to avoid a wave of “vaccine tourism.” New York postponed thousands of appointments because of a vaccine shipping delay. Texas is grappling with a cumbersome data tracking system that has slowed vaccinations.

But public health experts say some of California’s problems are self-inflicted.

The state has left setting up appointments and administering the vaccine to its 58 county and three city health departments — Long Beach, Pasadena and Berkeley — that in turn have partnered with local health providers. Although the state now allows anyone 65 and older to be vaccinated, counties may set their own eligibility requirements depending on how much vaccine they have.

That means someone 65 or older can get vaccinated in one county, but only those 75 and older are eligible in another. Rural Mendocino County, for example, is only vaccinating its 75+ residents. Complicating things even more, some health systems within a county will only immunize those over age 75 for now because of their vaccine supply.

Californians can sign up for vaccination appointments through two routes: Their local health department or their major health care providers, such as Kaiser and UCLA Health, that largely operate in urban areas. Some pharmacies are vaccinating people, too.

But the health providers’ vaccination programs are lagging behind. These hospitals and clinics bear the extra burden of running the vaccination campaigns when they already are overwhelmed with COVID patients, particularly in the hardest-hit Los Angeles region.

UCLA Health, for instance, contacted its patients on Tuesday to tell them that even though people 65 and over are now eligible for vaccines in Los Angeles County, they cannot yet set up appointments because they don’t have enough vaccine. “This recent expansion of eligibility did not come with additional vaccine supply,” UCLA Health said in emails to patients.

Another provider, Keck Medicine of USC, emailed patients that it won’t begin vaccinating people 65 and over until Feb. 1.

The city of Long Beach, on the other hand, already started vaccinating people over 65 last weekend at two locations, and many residents say the process is organized and working well.

Navigating the dozens of different sign-up systems is so daunting for people that a group of volunteer tech workers launched a statewide information portal called VaccinateCA.com.

Gov. Gavin Newsom is expected to formally announce a statewide vaccine sign-up system in the coming days. Meanwhile, the state has quietly launched a pilot website called MyTurn, myturn.ca.gov, that allows users to sign up for notification when they are eligible to get vaccinated in their county. Ultimately, the site will allow people to register for appointments in at least some counties.

A group of state lawmakers sent a letter to Gov. Gavin Newsom on Thursday demanding more information about exactly how the state allocates doses to counties and health care providers.

“A lack of communication and transparency from the administration has resulted in mass confusion by both the general public and our local public health officers,” one Democratic and nine Republican assemblymembers wrote. “Counties with hundreds of thousands of residents are being told that they will receive 1,000 doses next week without an explanation of how CDPH reached that number.”

California’s vaccination effort has been described as a race against time, as new, more infectious coronavirus variants emerge and COVID-19 cases mount by an average of 37,000 each day. To date, 35,000 Californians have died since the start of the pandemic.

As grim as the situation now seems, scientists and state officials see glimmers of hope.

New vaccines are expected to get emergency authorization later this year, including one candidate that requires only one dose.

Many public health officials are encouraged by President Joe Biden’s pandemic strategy unveiled this week, which includes more updates on allotments for states and plans to have the Federal Emergency Management Agency coordinate mass vaccination clinics nationwide. And more federal and state money is expected to boost local efforts.

“We’ve seen what a disastrous government can do during the pandemic,” Swartzberg said, referring to the Trump administration. “The flip side of that is equally true. Government that follows basic scientific and public health principles can do an enormous amount of good.”

Barbara Feder Ostrov, Contributing Writer for CalMatters, has reported on medicine and health policy for more than 15 years. She wrote this for CalMatters, a public interest journalism venture committed to explaining how California’s Capitol works and why it matters. CalMatters reporter Jocelyn Wiener contributed to this report.

Pompeii’s Museum Comes Back to Life to Display Amazing Finds