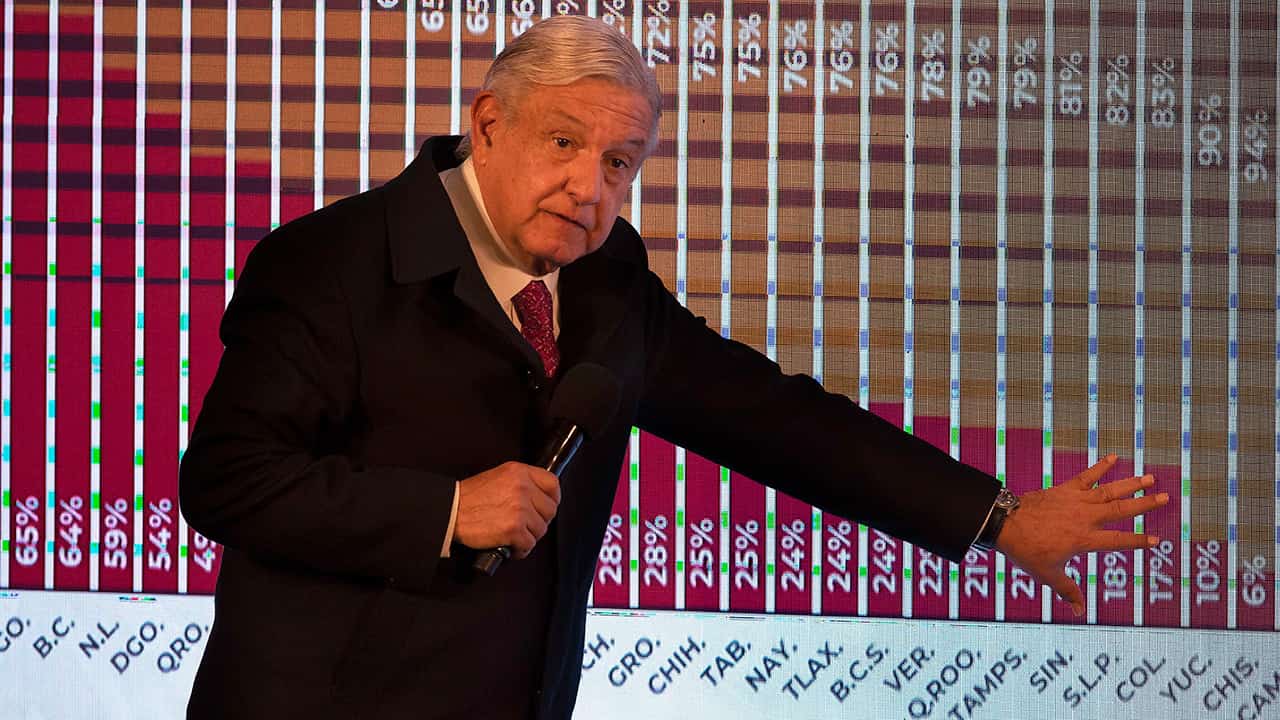 MEXICO CITY — Mexico President Andrés Manuel López Obrador worked from isolation Monday, a day after announcing that he had tested positive for COVID-19, and was absent from his daily news conference for the first time in his two years in office.

López Obrador’s absence came as his country registered its highest levels of infections and deaths to date.

He spoke by phone Monday with Russian President Vladimir Putin, and spokesman Jesus Ramirez said afterward on Twitter that Mexico would receive 24 million doses of the Russian Sputnik V vaccine against COVID-19, though it has not yet been approved for use in Mexico.

The president, who has been criticized for his handling of Mexico’s pandemic and for not setting an example of prevention in public, announced the diagnosis Sunday on his official Twitter account, saying, “The symptoms are mild but I am already under medical treatment.”

The 67-year-old López Obrador had a “light” case of COVID-19 and was “isolating at home,” said José Luis Alomía Zegarra, Mexico’s director of epidemiology.

On Monday, Interior Secretary Olga Sánchez Cordero said the president had designated her to hold the daily briefings until his return. She said López Obrador was well and strong.

“He is carrying out his functions as president of the republic. He will continue keeping an eye on public affairs,” she said. Sánchez Cordero, who spoke without wearing a mask, said she was awaiting test results of her own.

Asked How He Was Protecting Mexico, López Obrador Took Religious Amulets From His Wallet and Showed Them Off

Despite his age and high blood pressure, López Obrador has not received a vaccine, though Mexico has received batches of Pfizer-BioNTech doses. He has said that health workers would be the first to get them. Under the government plan, people over 60 will start being vaccinated in February.

López Obrador has rarely been seen wearing a mask and continued to keep up a busy travel schedule, taking commercial flights. He spent the weekend in San Luis Potosi and Nuevo Leon states, where he was photographed without a mask.

He has also resisted locking down the economy, noting the devastating effect it would have on so many Mexicans who live day to day. The country has registered nearly 150,000 COVID-19 deaths and more than 1.7 million infections. A new wave of infections has pushed the health system of the capital city close to saturation.

Early in the pandemic, asked how he was protecting Mexico, López Obrador took two religious amulets from his wallet and proudly showed them off.

“The protective shield is the ‘Get thee behind me, Satan,’” López Obrador said, reading off the inscription on the amulet, “Stop, enemy, for the Heart of Jesus is with me.”

In November, Tedros Adhanom Ghebreyesus, head of the World Health Organization, urged Mexico’s leaders to be serious about the coronavirus and set examples for its citizens, saying that “Mexico is in bad shape” with the pandemic. He did not name López Obrador.

On Monday, the WHO chief said via Twitter: “I am sorry to hear that you have tested positive for #COVID19, President @lopezobrador— . I wish you swift recovery. Stay strong!”

At the start of the pandemic López Obrador was criticized for leaning into crowds and giving hugs. The eternal campaigner, his political style has always been hands-on and personal. As the pandemic grew, he began limiting attendance to his events and maintaining his distance from supporters.

But on Friday, López Obrador posted a photo of himself, Ebrard, a translator and former chief of staff Alfonso Romo gathered around a table for a phone call with U.S. President Joe Biden. None was wearing a mask.

As in other countries, the mask question has polarized the Mexican public and appeared to divide reaction to López Obrador’s infection as well, said Ivonne Acuña Murillo, political science professor at the Universidad Iberoamericana in Mexico City. She noted a range of responses, from people wishing him a speedy recovery to those who appeared gleeful at his illness.

López Obrador is known to be stubborn and more often doubles down on a position rather than retreat in the face of criticism.

“He really is an individual of convictions and fixed ideas,” Acuña said. “He doesn’t easily change his positions and decisions.” Still, she thought it was more likely that he will begin wearing a mask than making a dramatic change in his optimistic discourse about the pandemic.

Along a Mexico City boulevard Monday, Gabriel Osorio, who was wearing a mask and protective glasses with his suit and tie, said it was a risky situation.

“We hope that he recovers and returns soon,” Osorio said. “Also, I didn’t think that he took the correct measures to take care of himself.”

Mexico City street vendor Eduardo Sanchez wished the president luck. “We’re all exposed to that,” he said through his mask. “Everyone, old or young, has to take care of themselves.”