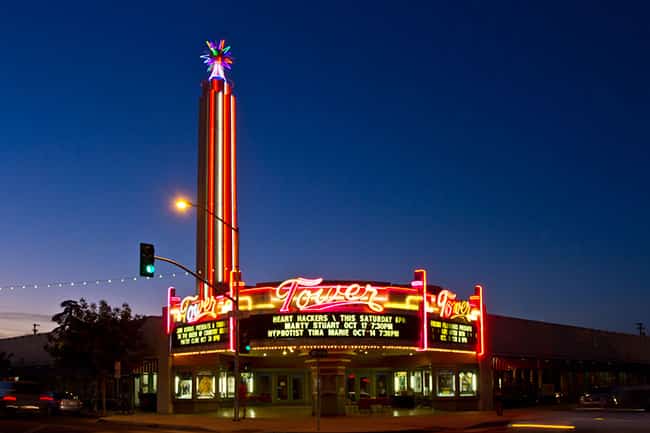 Adventure Church says it intends to complete the purchase of the iconic Tower Theatre despite protests from the community and a late bid from a well-known Fresno business.

The proposed sale of the landmark property with a neon tower inspired by the “Star Pylon” at the 1939 New York World’s Fair has triggered emotions, memories, and controversy.

However, real estate experts say that Jeromie Hansen’s recent bid to buy the Tower Theatre is a long shot. For Hansen to purchase the Tower would require Adventure Church to drop out.

And, that is unlikely to happen, the church’s pastor says.

The theater is already in escrow.

The sale of the property at 1201 N. Wishon Avenue is expected to close by mid-February, according to the listing broker, Jared Ennis of KW Commercial. At best, Ennis said, Hansen’s offer is a back-up if the Adventure Church deal falls through.

Otherwise, the escrow binds the Abbate family to sell the Tower — one of 45 Fresno County properties on the National Register of Historic Places — to the church.

A Late Bid from a Tenant

“We do realize the importance for the community to keep this theater an active, pulsing heartbeat of the arts and culture we need in the city. We can’t have it be anything else.” — Jeromie Hansen, Food Palette LLC

Hansen operates The Painted Table, an on-site and off-site catering company with his husband, Rodney Hansen. The catering company has been a Tower Theatre tenant but is moving north to Tornino’s banquet hall on Blackstone Avenue near Shaw Avenue. The Hansens announced the purchase of Tornino’s earlier this month.

Although the church is in escrow on the theater, Hansen says he is offering a better deal.

“We do realize the importance for the community to keep this theater an active, pulsing heartbeat of the arts and culture we need in the city. We can’t have it be anything else,” Hansen said.

Hansen said that the theater’s operator, Laurence Abbate, promised him to be the first backup offer in case the Adventure Church deal sours. GV Wire℠ left a message for Abbate but did not hear back by time of publication.

“The sellers are not in a position to accept any other offer at this point. However, they are reviewing backup offers and they have reviewed that specific offer,” Ennis said of the Hansens’ bid.

Ennis said that there are two backup bids and two other potential bids.

The sale includes not just the theater, but the surrounding property on the block. The listed sales price is $6.5 million, but neither Flores nor Jeromie Hansen would reveal the dollar amount of their bids.

The Tower Theatre for the Performing Arts has a capacity of 761 people. (towertheatrefresno.com)

The church’s desire to buy the property ignited a debate about zoning.

The city of Fresno and some members of the city council say that Adventure Church would need a rezone to hold services at the Tower.

“They are facing rezoning issues that are going to be astronomically expensive. But also they’re going to have to deal with the public to have these rezoning issues resolved. My offer involves no rezoning,” Hansen said. “I think they bit off more than they can chew.”

The church disagrees, citing the federal  Religious Land Use and Institutionalized Persons Act. It generally allows church use if other public assembly uses are approved.

Earlier this month, the city said the church needed rezoning, reversing its interpretation from the prior month.

Adventure Church has held indoor services at Tower Theatre since May in violation of recent state and local stay-at-home orders.

The city sent the theater and church a warning letter. Flores says they have not received any citations since. 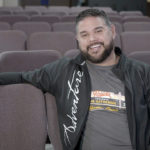 Since the announcement earlier this month of the sale, community members pushed back, saying the church is not a right fit for the Tower District neighborhood.

“The added level of community pressure on the owners of the theater … they need to realize that if they choose the right path, they’re going to end up as heroes and not tarnish their family legacy by stifling the arts,” Hansen said.

Flores says he plans to operate the theater as it always has, with concerts and films. He has not met with the Tower community yet, but would not rule it out.

Protesters gathered at the church’s Sunday services. Flores said he doesn’t understand the claim that Adventure Church is not part of the community.

“We’ve existed here for almost 11 years and we’ve yet to protest or to shut anything down,” said Flores, whose church at 1012 N. Palm Avenue is one-half mile from the Tower. “If we were playing sports, the scoreboard would read Adventure Church protesting, 0; people protesting against Adventure Church, 2.”

In recent weeks, Fresno City Councilman Miguel Arias said that the theater belongs to the neighborhood.

“Just because you own a theater doesn’t mean you truly own it. It really belongs to the greater good of the patrons who patronize that location,” Hansen said.

Escrow is a Contractual Obligation

Several real estate professionals GV Wire℠ spoke with said that once a sale is in escrow, it is a binding contractual obligation.

Gary Winter, managing attorney with Lawvex and a real estate broker, says escrow cannot be broken without breaching the contract. Winter is not involved in the transaction.

An escrow agent, usually a title company, receives the funds to purchase a property and holds it until the sale is completed.

Escrow is when a buyer can complete its due diligence and complete the financing needed for the sale, Winter says.

“Once you have a willing buyer, a willing seller, you’ve got a little bit of money thrown in with a third-party escrow holder — we’ve got a signed written contract,” Winter said.

In rare cases, Winter said, an agreed-upon contingency clause might allow the seller to withdraw from the deal.

Biden Signs Burst of Virus Orders, Vows ‘Help Is on the Way’