Biden Takes the Helm as President: 'Democracy Has Prevailed' 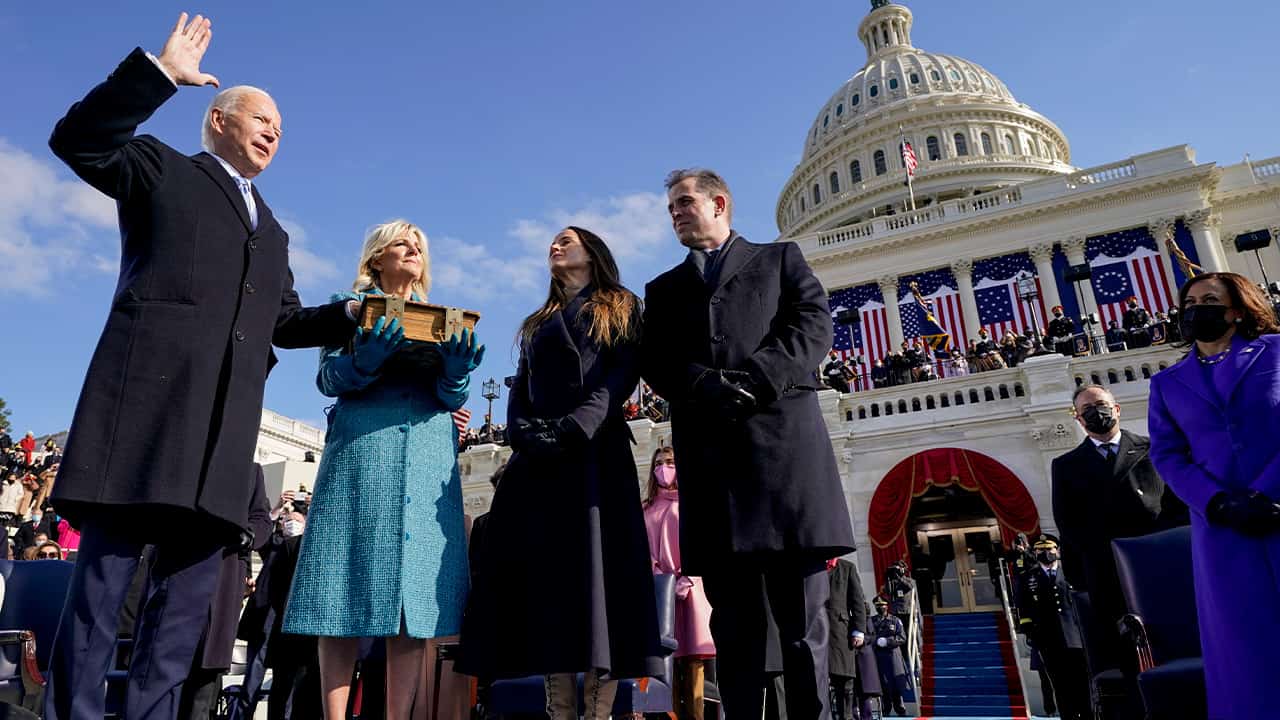 WASHINGTON — Joe Biden became the 46th president of the United States on Wednesday, declaring that “democracy has prevailed” as he took the helm of a deeply divided nation and inherited a confluence of crises arguably greater than any faced by his predecessors.

Biden’s inauguration came at a time of national tumult and uncertainty, a ceremony of resilience as the hallowed American democratic rite unfurled at a U.S. Capitol battered by an insurrectionist siege just two weeks ago. The chilly Washington morning was dotted with snow flurries, but the sun emerged just before Biden took the oath of office, the quadrennial ceremony persevering even though it was encircled by security forces evocative of a war zone and devoid of crowds because of the coronavirus pandemic.

And then he pivoted to challenges ahead, acknowledging the surging virus that has claimed more than 400,000 lives in the United States. Biden looked out over a capital city dotted with empty storefronts that attest to the pandemic’s deep economic toll and where summer protests laid bare the nation’s renewed reckoning on racial injustice.

“We have much to do in this winter of peril, and significant possibilities: much to repair, much to restore, much to heal, much to build and much to gain,” Biden said. “Few people in our nation’s history have more challenged, or found a time more challenging or difficult than the time we’re in now.”

His predecessor’s absence underscored the healing that is needed.

Flouting tradition, Donald Trump departed Washington on Wednesday morning ahead of the inauguration rather than accompany his successor to the Capitol. Though three other former presidents — Bill Clinton, George W. Bush and Barack Obama — gathered to watch the ceremonial transfer of power, Trump, awaiting his second impeachment trial, instead flew to Florida after stoking grievance among his supporters with the lie that Biden’s win was illegitimate.

Biden, in his third run for the presidency, staked his candidacy less on any distinctive political ideology than on galvanizing a broad coalition of voters around the notion that Trump posed an existential threat to American democracy. Biden did not mention Trump by name in the early moments of his inaugural address but alluded to the rifts his predecessor had helped create.

Biden Came to Office With a Well of Empathy and Resolve

“I know the forces that divide us are deep and they are real. But I also know they are not new. Our history has been a constant struggle between the American ideal that we all are created equal and the harsh, ugly reality of racism, nativism, fear, demonization that have long torn us apart,” Biden said. “This is our historic moment of crisis and challenge, and unity is the path forward and we must meet this moment as the United States of America.”

Biden came to office with a well of empathy and resolve born by personal tragedy as well as a depth of experience forged from more than four decades in Washington. At age 78, he was the oldest president inaugurated.

More history was made at his side, as Kamala Harris became the first woman to be vice president. The former U.S. senator from California is also the first Black person and the first person of South Asian descent elected to the vice presidency and will become the highest-ranking woman ever to serve in government.

The two were sworn in during an inauguration ceremony with few parallels in history.

Tens of thousands of troops are on the streets to provide security precisely two weeks after a violent mob of Trump supporters, incited by the Republican president, stormed the Capitol in an attempt to prevent the certification of Biden’s victory. Vice President Kamala Harris bumps fists with President-elect Joe Biden after she was sworn in during the inauguration, Wednesday, Jan. 20, 2021, at the U.S. Capitol in Washington. (Jonathan Ernst/Pool Photo via AP)

“Here we stand, just days after a riotous mob thought they could use violence to silence the will of the people,” Biden said. “To stop the work of our democracy. To drive us from this sacred ground. It did not happen. It will never happen. Not today, not tomorrow. Not ever. Not ever.”

The tense atmosphere evoked the 1861 inauguration of Lincoln, who was secretly transported to Washington to avoid assassins on the eve of the Civil War, or Roosevelt’s inaugural in 1945, when he opted for a small, secure ceremony at the White House in the waning months of World War II.

The day began with a reach across the aisle after four years of bitter partisan battles under Trump. At Biden’s invitation, congressional leaders from both parties bowed their heads in prayer in the socially distanced service just a few blocks from the White House.

Once at the Capitol, Biden will be administered the oath by Chief Justice John Roberts; Harris will be sworn in by Justice Sonia Sotomayor, the first Latina member of the Supreme Court. Vice President Mike Pence, standing in for Trump, was sitting nearby as Lady Gaga, holding a gold microphone, sang the National Anthem accompanied by the U.S. Marine Corps band.

The theme of Biden’s approximately 30-minute speech will be “America United,” and aides said it would be a call to set aside differences during a moment of national trial.

Biden will then oversee a “Pass in Review,” a military tradition that honors the peaceful transfer of power to a new commander in chief. Then, Biden, Harris and their spouses will be joined by that bipartisan trio of former presidents to lay a wreath at the Tomb of the Unknown Soldier at Arlington National Ceremony.

In Lieu of the Traditional Glitzy Balls That Welcome a New President to Washington, Biden Will Take Part in a Televised Concert

Later, Biden will join the end of a slimmed-down inaugural parade as he moves into the White House. Because of the pandemic, much of this year’s parade will be a virtual affair featuring performances from around the nation.

In the evening, in lieu of the traditional glitzy balls that welcome a new president to Washington, Biden will take part in a televised concert that also marks the return of A-list celebrities to the White House orbit after they largely eschewed Trump. Among those in the lineup: Bruce Springsteen, Justin Timberlake and Lin-Manuel Miranda.

“I protested 45’s inauguration, and I wanted to be here when he left,” said Raelyn Maxwell of Park City, Utah. ”And I wanted to celebrate the new president.” She brought a bouquet of roses she hoped to toss to Harris and some champagne to toast the occasion.

Trump is the first president in more than a century to skip the inauguration of his successor. In a cold wind, Marine One took off from the White House and soared above a deserted capital city to his own farewell celebration at nearby Joint Base Andrews. There, he boarded Air Force One for the final time as president for the flight to his Florida estate.

“I will always fight for you. I will be watching. I will be listening and I will tell you that the future of this country has never been better,” said Trump, who wished the incoming administration well but once again declined to mention Biden’s name.

The symbolism was striking: The very moment Trump disappeared into the doorway of Air Force One, Biden stepped out of the Blair House, the traditional guest lodging for presidents-in-waiting, and into his motorcade for the short ride to church.

Trump did adhere to one tradition and left a note for Biden in the Oval Office, according to the White House, which did not release its contents. And Trump, in his farewell remarks, hinted at a political return, saying “we will be back in some form.”

And he, without question, will shadow Biden’s first days in office.

Trump’s second impeachment trial could start as early as this week. That could test the ability of the Senate, poised to come under Democratic control, to balance impeachment proceedings with confirmation hearings and votes on Biden’s Cabinet choices.

Biden was eager to go big early, with an ambitious first 100 days that includes a push to speed up the distribution of COVID-19 vaccinations to anxious Americans and pass a $1.9 trillion virus relief package. On Day One, he’ll also send an immigration proposal to Capitol Hill that would create an eight-year path to citizenship for immigrants living in the country illegally.

He also planned a 10-day blitz of executive orders on matters that don’t require congressional approval — a mix of substantive and symbolic steps to unwind the Trump years. Among the planned steps: rescinding travel restrictions on people from several predominantly Muslim countries; rejoining the Paris climate accord; issuing a mask mandate for those on federal property; and ordering agencies to figure out how to reunite children separated from their families after crossing the border.

Related Topics:Joe Biden
Up Next

On Day One, Biden to Undo Trump Policies on Climate, Virus