Retreating Russians Leave Their Comrades' Bodies Behind
Share with friends

In a rally dubbed “Stop the Steal! Stand For Trump,” backers of the president prayed and said Trump should be the rightful winner of the presidential election, not Joe Biden. They staged at the Sierra Vista Mall parking lot before caravanning in Clovis and Fresno. 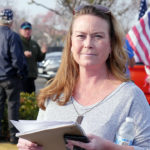 “Our president is in trouble. We know that our election was stolen. We know that there was voter fraud. And we’re here to stand for our president and to say that we know what happened and something has to change.” — Rally organizer Crissy Corpus

“Our president is in trouble. We know that our election was stolen. We know that there was voter fraud. And we’re here to stand for our president and to say that we know what happened and something has to change,” Corpus said.

She cites voting machines that “had the back door that allowed for other foreign entities such as China and Iran and Russia to interfere with our election, to switch votes to Biden from Trump. We know that there was voter fraud. We know that there were suitcases of ballots that came out after everybody was told to go home. There’s too many things.”

She trusts attorneys, such as Sidney Powell, Lin Wood and Rudy Giuliani, who have filed multiple lawsuits — almost all of them unsuccessful — challenging the election results.

“I believe them,” Corpus said.

Despite the assertions that Corpus and other protesters GV Wire℠ spoke with, numerous investigations have revealed no evidence of significant or widespread fraud.

She is praying that congress today denies Biden the Electoral College votes.

Clovis City Councilman Vong Mouanoutoua appeared, chatting with protesters prior to the caravan. He said he was just supporting an event being held in the city.

“It’s happening here in our backyard. Whether it’s for the Housing Authority or whatever the issue is, just to be able to show support that people can rally peacefully and people can come and make their statements peacefully. That’s what this country is about,” Mouanoutoua said.

He does believe Joe Biden was the rightful winner. He believes the election process should move forward.

“If someone has the evidence, show it. If the time has passed, let’s move forward because it’s time to also move forward, because we need it and we need to get together as well,” he said.

US Capitol Breached as Trump Supporters Clash With Police