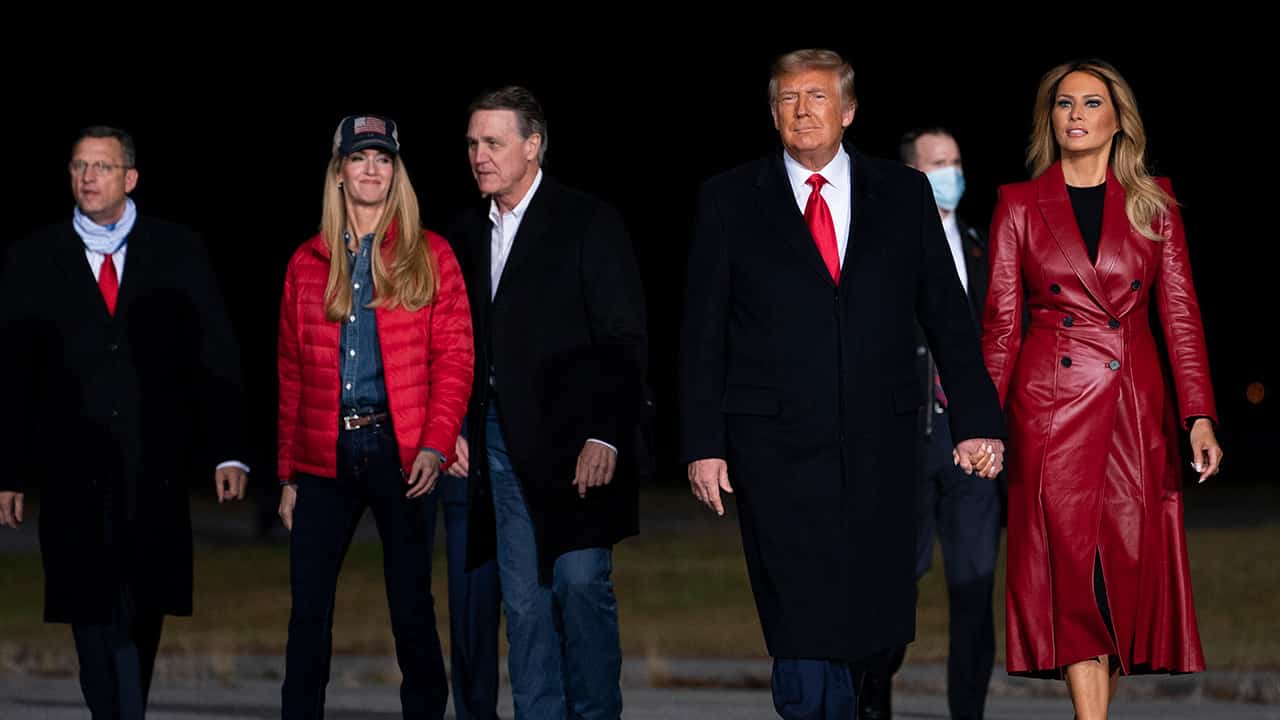 ATLANTA — For more than four years, President Donald Trump has dominated the Republican Party and the whole of American politics. Now Georgia gets to decide what comes next.

Two Senate runoffs on Tuesday, just 15 days before Trump leaves office, will not only determine which party controls the Senate but offer the first clues about how long Trump can maintain his grip on the nation’s politics once he’s out of the White House.

Democrats are looking to prove that President-elect Joe Biden’s win in Georgia and nationally was not just a Trump backlash, but a permanent shift for a once-solidly Republican state. Their candidates, Jon Ossoff and Raphael Warnock, have pushed to solidify Democratic gains among young voters in urban areas and younger suburbanites around Atlanta, along with strong Black turnout.

For Republicans, who’ve watched David Perdue and Sen. Kelly Loeffler run as Trump loyalists, the question is how long embracing the president’s disruptive politics — even indulging his demands that elections officials defy the law to overturn his defeat — can deliver victories in battlegrounds.

“The party has a real choice to make on where we go from here,” said Michael McNeely, a former Georgia Republican vice chairman. “Either candidates or those already in office are going to say, hey, we’re going to move beyond the Trump presidency or we’re going to continue to take our lead from President Trump, or former President Trump.”

Republicans need to win just one of the two seats on the ballot to maintain Senate control. Democrats need to win both for a 50-50 split that would make Vice President-elect Kamala Harris, as the Senate’s presiding officer, the tie-breaking vote. The stakes are high enough that Biden and Trump are scheduled to hold dueling rallies Monday in Georgia. Harris was in the state Sunday.

Loeffler, an appointee in her first campaign, and Perdue, who’s trying to win a second term after his first expired Sunday, chose a strategy that worked for several of their GOP colleagues who won hotly contested races in November.

Trump fueled Republican turnout, especially in rural areas and small towns, that overwhelmed Democrats in states less diverse than Georgia. If the trend holds for Perdue or Loeffler, Republicans would owe their majority in large measure to Trump’s success in drawing out voters who had previously tuned out.

But Democratic victories would leave Republicans to reckon more directly with Trump’s rise and fall. The worst-case scenario for Republicans would be Ossoff and Warnock capitalizing again in Atlanta suburbs, while watching rural and small-town turnout drop from November, when Trump was on the ballot.

Those growing, diversifying suburbs, which not long ago ensured statewide GOP victories, have trended toward Democrats in the Trump era not just in Georgia, but in metro areas such as Philadelphia, Dallas, Houston and Phoenix.

Trump has shown since November that he has no intention of going quietly. He’s repeatedly denied defeat and in a telephone call over the weekend to Georgia’s Republican secretary of state, Brad Raffensperger, demanded that he “find” enough votes to overturn Biden’s victory.

That call, a recording of which was obtained by The Associated Press, demonstrates what Perdue and Loeffler have faced — and chosen to embrace. Both are wealthy business figures who came to politics from the center-right faction of the U.S. establishment, rather than the more populist throng that propelled Trump. But Perdue and Loeffler have defined their Washington tenures by how closely they align with a president who remade Republicanism in his image.

“I stood by the president 100% of the time. I’m proud to do that,” Loeffler said in one of her closing interviews on Fox News.

As Trump railed in November about election fraud that even his then-attorney general said didn’t happen, Perdue and Loeffler called for Raffensperger to resign. Raffensperger instead presided over multiple counts that left Biden as the winner in Georgia by about 12,000 votes out of 5 million cast. The senators also never defended Gov. Brian Kemp as Trump belittled him as “incompetent” and called for his resignation, less than three years after the president endorsed Kemp in a contentious GOP primary.

“Trump got a whole lot of people off the bench,” said former U.S. Rep. Jack Kingston, a Trump ally, in a recent interview. “He appealed to disenfranchised, disaffected voters. With him gone, it’s a different ballgame and that’s what Republicans, starting with David and Kelly, are trying to replicate.”

Trump received about 385,000 more votes in Georgia than he did four years ago. It was part of a national uptick to 74 million votes, the second-highest presidential popular vote total in history. Biden, though, set the record with 81 million, and his Georgia total was about 600,000 ahead of Hillary Clinton’s 2016 mark.

The president’s brand is even more risk-and-reward in Georgia because of how the two parties’ votes are distributed: Democratic-trending metro areas are growing while rural pockets and small towns — Trump’s core — mostly are not. The suburbs between are shifting as they become less white and as younger white Georgians, whether native or transplant, trend less conservative.

Linda Graham, a 52-year-old Republican, explained the landscape as she greeted canvassers last month from the conservative Americans for Prosperity. “Absolutely four Republican votes in this house,” she said, including her young adult children casting absentee ballots. But as she looked around her cul-de-sac, she named the more recent arrivals with much younger children still at home.

“I love ‘em, but they’re Democrats,” Graham said. “They’re not old enough for it to have affected their money, I guess,” she mused.

According to Ryan Anderson, a nonpartisan data analyst in Atlanta, early turnout in Democratic congressional districts outpaces Republican districts when compared to the November election. There are still at least 300,000 absentee ballots outstanding.

The lowest-performing Democratic district has a 74.8% mark compared to November, but that’s still higher than five of Georgia’s eight Republican districts. And in one of Republicans’ two most concentrated districts, early turnout is only 69.2% of what it was in the general election.

Trump, on Tape, Presses GA. Official to ‘Find’ Him Votes