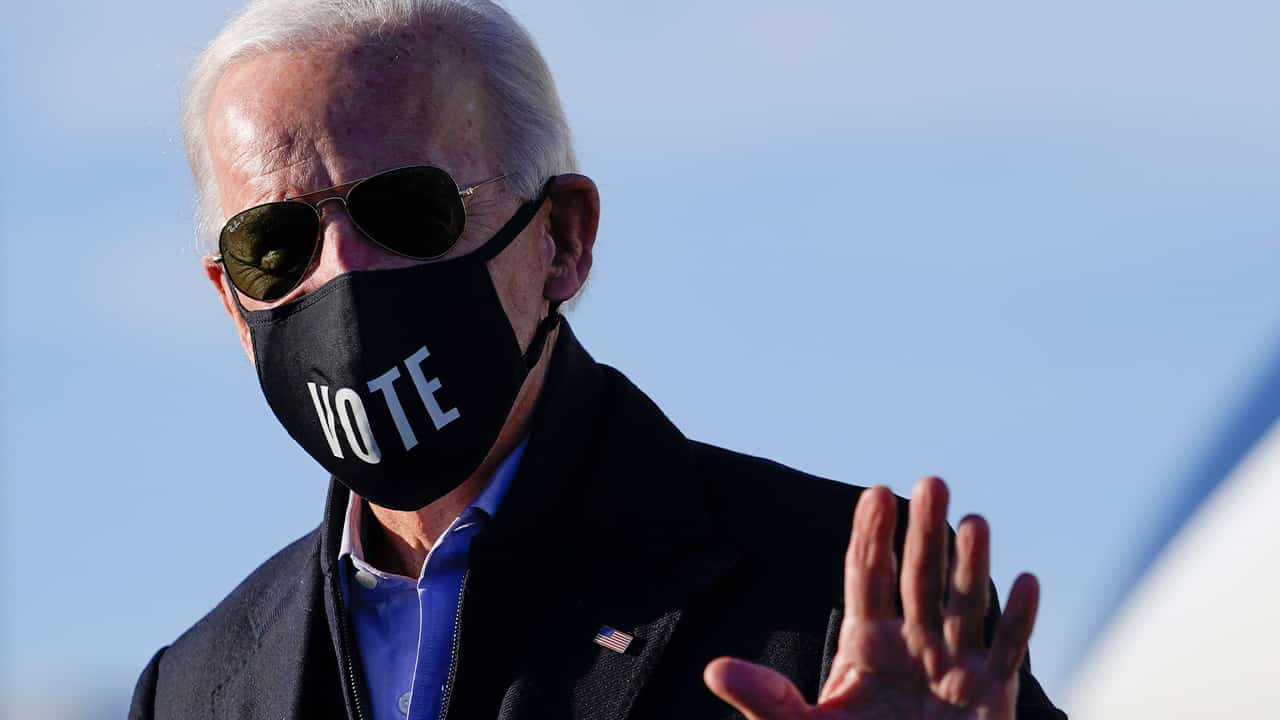 WASHINGTON — President-elect Joe Biden is mostly steering clear of the controversy engulfing President Donald Trump’s final days in office, aiming to project the different approach to governing Americans can expect when he moves into the White House on Jan. 20.

Biden and his team have offered a muted response to Trump’s efforts to overturn the election, which reached a new level this past weekend when he pressured Georgia’s Republican secretary of state to “find” enough votes to flip the state in his favor.

While some Democrats say Trump’s actions merit new impeachment proceedings, Biden has been more circumspect. He didn’t address the matter directly during his visit to Georgia Monday afternoon where he campaigned for two Democratic Senate candidates, only hinting at Trump’s efforts to reverse the result of the election by joking, “I don’t know why he still wants the job — he doesn’t want to do the work.”

The low-key approach is in keeping with Biden’s overall strategy to focus on preparing to assume the presidency even as Trump goes to ever-greater lengths to sow doubt about the election results. The relatively muted response reflects an effort to reassure Americans that Biden will take a starkly different approach to leading during a time of historic turmoil over the coronavirus pandemic and the economy.

“The country is ready to move forward, and President-elect Biden is going to remain focused on the work ahead of us in completing a successful transition and putting together an administration that will get this virus under control and build our economy back better,” said Biden adviser Kate Bedingfield.

Biden’s aides believe Americans outside Washington want to hear more about how the Biden presidency will help them and less about the partisan squabbling that has characterized the past four years of Trump’s presidency.

So while Biden has chosen his moments to weigh in on Trump’s attacks on the election results — he delivered a speech denouncing Trump’s actions after the Electoral College certified his win in mid-December — he’s largely focused on his Cabinet nominees and fleshing out his response to the pandemic.

There Was No Widespread Fraud in the Election

And while some Democrats on Capitol Hill have raised the prospect of impeachment, Democratic leadership has emphasized that the party’s focus is on Biden’s agenda rather than on Trump’s malfeasance.

The strategy is informed by the reality that Trump’s complaints have been repeatedly rebuffed by members of his own party and administration and are running out of oxygen as Biden’s inauguration draws near.

There was no widespread fraud in the election, which a range of election officials across the country, as well as Trump’s former attorney general, William Barr, has confirmed. Republican governors in Arizona and Georgia, key battleground states crucial to Biden’s victory, have vouched for the integrity of the elections in their states. Nearly all the legal challenges from Trump and his allies have been dismissed by judges, including two tossed by the Supreme Court, where three Trump-nominated justices preside.

Biden’s team of lawyers have kept tabs on the legal challenges in the states and weighed in when they believed it was necessary. But his aides say taking on Trump every time he raises a new, baseless complaint gives the president exactly what he wants and doesn’t deserve: attention and credibility.

“Donald Trump’s attack on our democracy has failed, and his baseless claims of voter fraud have been debunked across the board, including by dozens of courts and his own attorney general,” Bedingfield said.

Trump’s next big stand comes Wednesday, when some Republicans in the House and Senate plan to protest Biden’s win as Congress formally ratifies his victory, and thousands of Trump supporters will descend on the Capitol for a march.

But that show of protest faces its own challenges as even some of Trump’s staunchest allies on Capitol Hill have dismissed the move. Arkansas Sen. Tom Cotton, a longtime Trump supporter who may seek the White House in 2024, said in a statement that he would reject the gambit because it would “establish unwise precedents.”

“Congress would take away the power to choose the president from the people, which would essentially end presidential elections and place that power in the hands of whichever party controls Congress,” Cotton said.

Indeed, by avoiding engaging with Trump, Biden is also hoping to maintain the opportunity for bipartisanship in the new Congress, which he’s repeatedly emphasized will be key to his hopes of getting anything done. Going after Trump too aggressively could further politicize his presidency before it even begins.

But some Democrats warn that there are risks to staying above the fray.

Jim Manley, a former longtime Senate Democratic leadership aide, said the party’s failure to take on Trump’s recent moves could set the tone for Biden’s presidency and beyond.

“The risk is that it affirms for not only future presidents, but also Republicans in the House and the Senate, that there are no consequences for breaking the rules,” he said. “The fear is that doing nothing will embolden Republicans, some of whom were teetering on the edge of sedition to ramp up their efforts to undermine Biden’s presidency.”

Trump has indicated he has no plans to go away quietly, floating a possible 2024 run, blanketing social media with incendiary posts and threatening Republicans who break with his complaints about the election results. He’s certain to continue to marshal his sizable base in support of his post-presidential plans — or in opposition to Biden’s.

And while Democrats on Capitol Hill publicly emphasize the need to stay focused on Biden’s proposals, they privately express concerns about the tone they say Republicans are setting for the Biden presidency by protesting the certification of his win.

According to Democratic strategist Andrew Feldman, the prospect of continued obstruction from Republicans and complaints about the legitimacy of Biden’s presidency make it all the more important that Biden stay laser-focused on enacting his agenda even in the middle of the political din.

“The Republicans aren’t going to let up here. We’re going to be dealing with a narrative for the next four years about Biden being an illegitimate president,” he said. “We are going to have to combat that — not only with messaging, but with real results that help the American people.”