Trump's $2,000 Checks All but Dead as GOP Senate Refuses Aid 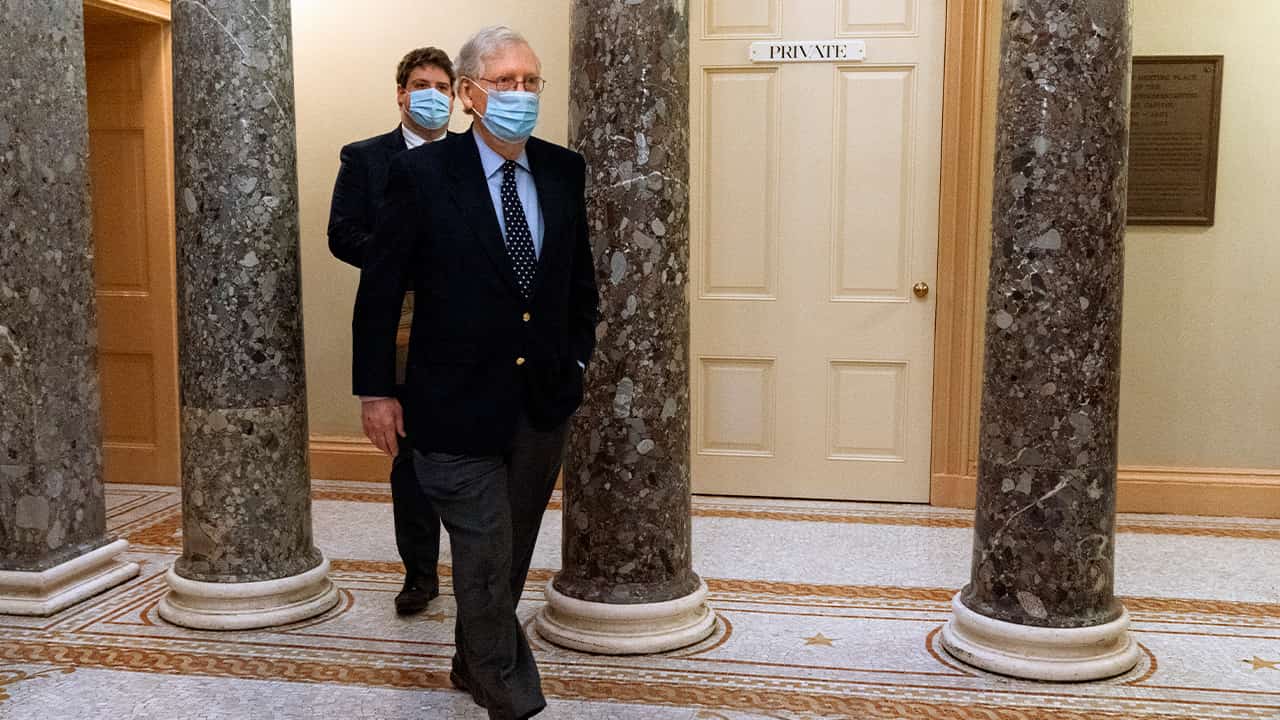 WASHINGTON — President Donald Trump’s push for $2,000 COVID-19 relief checks was all but dead Wednesday as Senate Majority Leader Mitch McConnell proposed an alternative approach of loading up the bill with other White House priorities that appeared destined to fail.

The roadblock mounted by Senate Republicans appears unsurmountable, even as pressure builds to approve the bigger checks. Trump wants the Republican-led chamber to follow the House and increase the checks from $600 for millions of Americans. A growing number of Republicans, including two senators in runoff elections on Jan. 5 in Georgia, agree. But most GOP senators oppose more spending, even if they are also wary of bucking Trump.

Senators will be back at it after McConnell blocked a vote Tuesday, but his new bill — which includes the formation of a commission to investigate the 2020 election as well as a complicated repeal of big tech liability protections — does not have enough support to pass.

“What we’re seeing right now is Leader McConnell trying to kill the checks — the $2,000 checks desperately needed by so many American families,” Senate Democratic leader Chuck Schumer said at the Capitol.

The showdown over the $2,000 checks has thrown Congress into a chaotic year-end session just days before new lawmakers are set to be sworn into office for the new year. It’s preventing action on another priority — overturning Trump’s veto on a sweeping defense bill that has been approved every year for 60 years.

Trump has berated Republican leaders for the stonewalling, finding rare common cause with the Democrats pushing them to act. Leading Republicans warned that the GOP’s refusal to provide more aid as the virus worsens will jeopardize next week’s Senate election in Georgia.

“The Senate Republicans risk throwing away two seats and control of the Senate,” said Newt Gingrich, the former congressional leader, on Fox News. He called on Senate Republicans to “get a grip and not try to play cute parliamentary games with the president’s $2,000 payment.”

Saying Little, McConnell Is Trying to Provide an Offramp

House Speaker Nancy Pelosi said, “These Republicans in the Senate seem to have an endless tolerance for other people’s sadness.”

Meanwhile, Treasury Secretary Steven Mnuchin said some of the $600 payments were being sent by direct deposit to Americans’ bank accounts as early as Tuesday night. Mnuchin tweeted that paper checks will begin to go out Wednesday.

Saying little, McConnell is trying to provide an offramp for GOP senators to avoid a tough vote. Republicans are split between those who align with Trump’s populist instincts and those who adhere to what had been more traditional conservative views against government spending.

Congress had settled on smaller $600 payments in a compromise over the big, year-end relief bill Trump reluctantly signed into law.

The GOP leader filed new legislation late Tuesday linking the president’s demand for bigger checks with two other Trump priorities — repealing protections for tech companies like Facebook or Twitter that the president complained are unfair to conservatives as well the establishment of a bipartisan commission to review the 2020 presidential election he lost to President-elect Joe Biden.

Liberal senators led by Bernie Sanders of Vermont who support the relief aid are blocking action on the defense bill until a vote can be taken on Trump’s demand for $2,000 for most Americans.

“The working class of this country today faces more economic desperation than at any time since the Great Depression of the 1930s,” Sanders said. “Working families need help now.” He also tried to force a vote on the relief checks, but McConnell objected a second time.

The GOP blockade is causing turmoil for some as the virus crisis worsens nationwide and Trump amplifies his unexpected demands.

Other Republicans Panned the Bigger Checks

The two GOP senators from Georgia, David Perdue and Kelly Loeffler, announced Tuesday they support Trump’s plan for bigger checks as they face Democrats Jon Ossoff and Raphael Warnock in runoff elections that will determine which party controls the Senate.

Republican Sens. Josh Hawley of Missouri and Marco Rubio of Florida, among the party’s potential 2024 presidential hopefuls, also are pushing the party in the president’s direction.

Other Republicans panned the bigger checks, saying the nearly $400 billion price tag was too high, the relief is not targeted to those in need and Washington has already dispatched ample sums on COVID aid.

In the House, dozens of Republicans calculated it was better to link with Democrats to increase the pandemic payments rather than buck the outgoing president and constituents counting on the money. House Democrats led passage, 275-134, but 44 Republicans joined almost all Democrats on Monday for a robust two-thirds vote of approval.

It’s highly likely that McConnell will set up votes ahead on both the House-passed measure supporting Trump’s $2,000 checks as well as his own new version, as a way to give senators a chance to show they took action.

That’s a process that almost ensures neither bill will pass.

Trump’s push could fizzle out in the Senate but the debate over the size and scope of the year-end package — $900 billion in COVID-19 aid and $1.4 trillion to fund government agencies through September — is potentially one last confrontation before the new Congress is sworn in Sunday.

The COVID-19 portion of the bill revives a weekly pandemic jobless benefit boost — this time $300, through March 14 — as well as the popular Paycheck Protection Program of grants to businesses to keep workers on payrolls. It extends eviction protections, adding a new rental assistance fund.