What began as street racing on Blackstone Ave. turned into tragedy in northwest Fresno on Saturday night, police said Monday. The impact of a fatal collision that killed four people at the intersection of Bullard and Palm avenues was likely the result of one vehicle speeding in excess of 100 mph.

“That gives no reaction time for anybody on the roadway,” said Fresno Police Captain Don Gross during an afternoon news conference.

At 11:38 p.m. Saturday, two motorcycle officers attempted to stop two cars traveling 75 mph on Blackstone near Barstow, officials said. One of the drivers pulled his Camaro over in a shopping center parking lot and was cited for excessive speed, according to police.

But, the driver of a black Mustang did not stop, police said. Instead, he turned westbound onto Bullard Ave.

A pursuing officer turned on his lights and siren, but was delayed from turning immediately onto Bullard when the traffic signal turned red, according to a police statement. After clearing the intersection and continuing, the officer did not see the suspect vehicle.

The officer drove until he reached Maroa before ending the pursuit. Gross said the officer can be heard on his bodycam video saying, “Yeah, I’ve lost him.”

Just 2 and a half minutes later, a 9-1-1 call came into dispatch reporting a three car collision at Bullard and Palm.

Surveillance video taken by a camera at a Sinclair gas station on the southeast corner of the intersection shows a fast-moving vehicle, identified by police as the Mustang, running the red light. Although the crash is not visible, debris is soon seen scattering into the view of the camera.

When officers arrived, three passengers inside a pickup truck hit by the Mustang were dead, police said. Two other passengers in the pickup truck are hospitalized, with one in critical condition, officials said.

A Mini Cooper driven by a 17-year-old female was also hit. Police say she is also hospitalized and expected to survive her injuries.

The driver of the Mustang was extracted from his car and taken to the hospital, where he later died, according to police.

“If you have kids that drive, or you have young adults that drive, please tell them to slow down,” said Fresno City Council Member Mike Karbassi during the news conference. “Racing has to stop.” 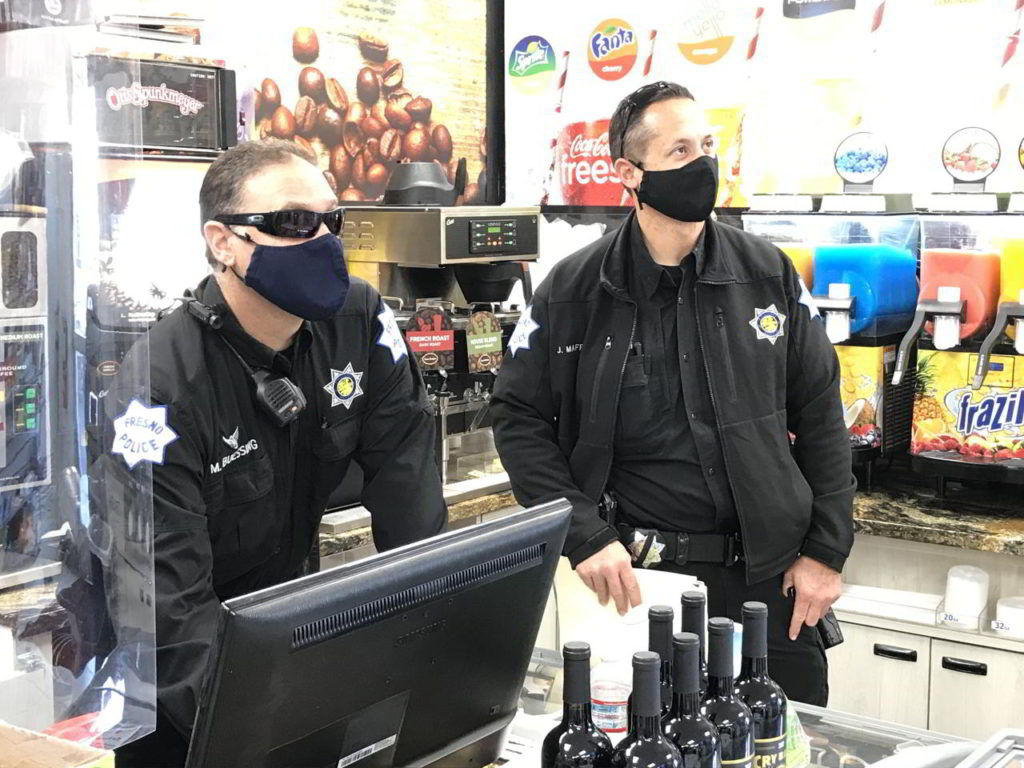 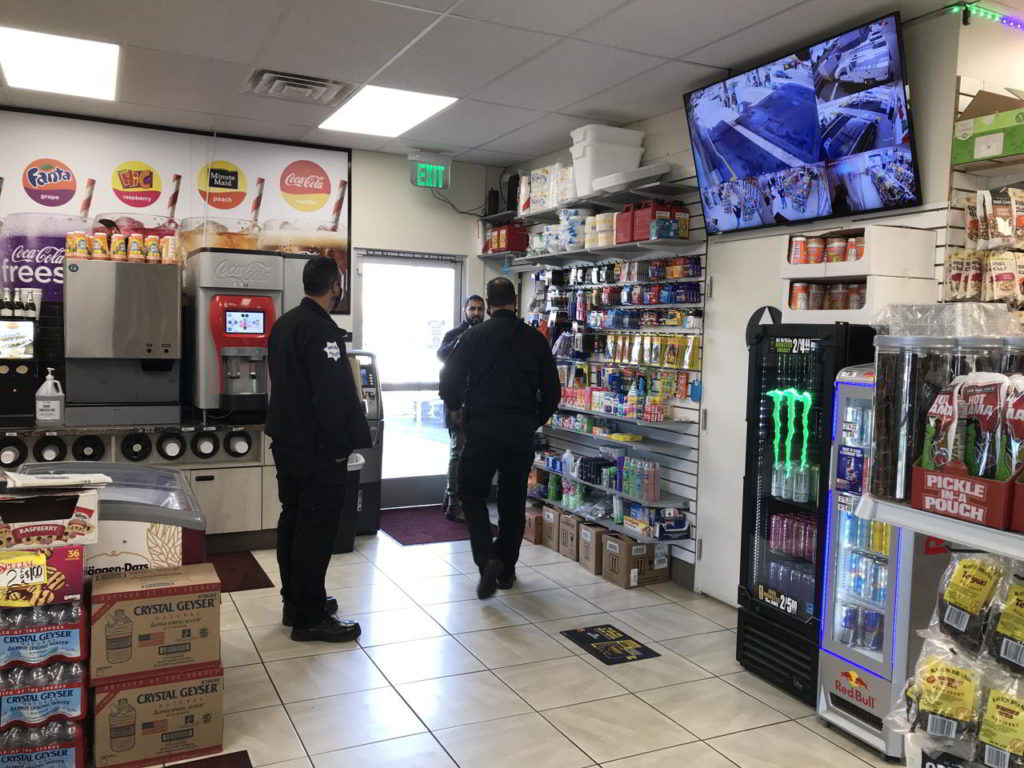 Fresno police speak with the Sinclair gas station’s manager on Monday. The station was closed at the time of the collision, but a closed circuit camera from the location captured a view of the incident. (GV Wire/Jim Jakobs)

“Linda and Allison were cousins. They deserved better, and they’re going to get a community that is going to their families with the support they need.”–Fresno City Council Member Mike Karbassi

The Fresno County Coroner’s office identified the victims as:

“Linda and Allison were cousins,” said  Karbassi. “They deserved better, and they’re going to get a community that is going to their families with the support they need.”

Karbassi said he is working with the Fresno Center and its executive director Pao Yang in an effort to raise $30,000 for funeral expenses. “In their (Hmong) culture, the funeral process is very intricate. It’s very essential.”

Gross said investigators are waiting on toxicology reports to determine if Villareal had drugs or alcohol in his system at the time of the collision.

Karbassi pushed for extra officers a few weeks ago to crack down on speeding complaints on Herndon Avenue. Several citations were written.

Karbassi says right now the traffic enforcement unit is working with less officers now than several years ago when they had 80.

Captain Gross confirms they have a grand total of 67 officers in the traffic unit, down due to budget constraints and reductions over the past couple of years.

“We currently have 50 positions assigned to the Traffic Safety Section (officers on motorcycles), of that we have 1 Lieutenant, 6 Sergeants, and 43 officers.  We currently are holding 2 vacancies and have 6 officers out long term absence for injury (not COVID-19 related), leaving 42,” says Gross in an email to GV Wire℠.

Gross says the traffic unit also houses their Skywatch unit (1 Sergeant and 6 officers), as well as their Special Events Unit (1 Sergeant and 9 officers that handle the detective portion of traffic enforcement from collision reconstruction, hit and run, grants and tows). With all of these officers, that give Gross a grand total of 67 officers.

But, Karbassi says a lot of the officers in the traffic unit have been assigned to an ongoing gang operation to cut down on the numbers of shootings and murders.

“It’s a cyclical problem,” says Karbassi. “So you let people out of jail because we can’t keep them in jail. So we have to increase our enforcement of gangs to protect the public. Yet we are diverting resources from traffic to do that.”

He believes this is a symptom of a much larger problem.

“We can’t recruit. It’s getting difficult,” said Karbassi. “This is a really scary sign of things to come. And what we need to do is push back on some of those politicians in Sacramento to stop constantly playing this game and demonizing the police department because they have a very specific core function.”