US Vaccinations Ramp Up as 2nd COVID-19 Shot Nears 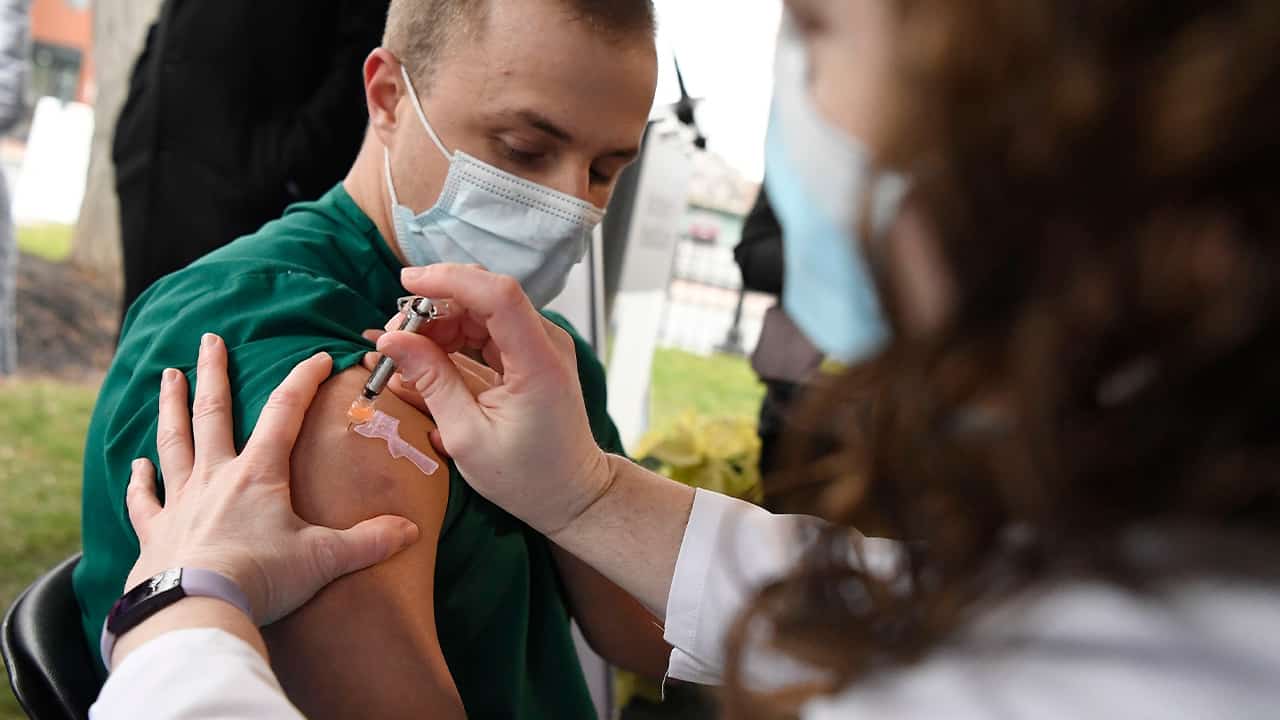 The Food and Drug Administration said its preliminary analysis confirmed the effectiveness and safety of the vaccine developed by Moderna and the National Institutes of Health, bringing it to the cusp of U.S. authorization.

A panel of outside experts is expected to vote to recommend the vaccine on Thursday, with a final FDA decision coming soon thereafter.

The positive news came as hospitals ramped up vaccinations with the shot developed by Pfizer and BioNTech, which the FDA cleared last week. The Moderna vaccine uses the same technology and showed similarly strong protection against COVID-19.

Packed in dry ice to stay at ultra-frozen temperatures, shipments of Pfizer’s COVID-19 vaccine began arriving at 400 additional hospitals and other distribution sites, one day after the nation’s death toll surpassed a staggering 300,000. The first 3 million shots are being strictly rationed to front-line health workers and elder-care patients, with hundreds of millions more shots needed over the coming months to protect most Americans.

A second vaccine can’t come soon enough as the country’s daily death count continues to top 2,400 amid over 210,000 new daily cases, based on weekly averages of data compiled by Johns Hopkins University. The devastating toll is only expected to grow in coming weeks, fueled by holiday travel, family gatherings and lax adherence to basic public health measures.

The first vaccine deliveries have provided a measure of encouragement to exhausted doctors, nurses and hospital staffers around the country.

In Florida, Government Officials Expect to Have 100,000 Doses of the Vaccine

Johnnie Peoples, a 43-year-old survival flight nurse, was excited and a little nervous Monday afternoon as he unzipped his flight suit and stuck out his left arm to become the first person to receive the vaccine at the University of Michigan Medical Center in Ann Arbor.

Since March, he’s transported critically ill COVID-19 patients by jet from smaller hospitals around the state to the university medical center. It’s up-close-and-personal work that requires him to adjust ventilator settings and administer infusions to keep blood pressure from plummeting.

In Florida, government officials expect to have 100,000 doses of the vaccine by Tuesday at five hospitals across the state.

“This is 20,000 doses of hope,” said John Couris, president and chief executive officer, Tampa General Hospital, after the delivery of 3,900 vaccine vials on Monday. Each vial has five doses.

Because the vaccine requires two rounds, the people getting injections now will need a second shot in about three weeks.

Vaccinations were also expected to kick off Tuesday in New Jersey, which is dividing some 76,000 doses among health workers and nursing home residents. The federal government is coordinating the massive delivery operation by private shipping and distribution companies based on locations chosen by state governors.

Following another initial set of deliveries Wednesday, officials with the Trump administration’s Operation Warp Speed said they will begin moving 580 more shipments through the weekend.

“We’re starting our drumbeat of continuous execution of vaccine as it is available,” Army Gen. Gustave Perna, chief operating officer for Warp Speed, told reporters Monday. “We package and we deliver. It is a constant flow of available vaccine.”

Shots for nursing home residents won’t begin in most states until next week, when some 1,100 facilities are set to begin vaccinations.

Perna and other U.S. officials reiterated their projection that 20 million Americans will be able to get their first shots by the end of December, and 30 million more in January.

Moderna’s Vaccine Is the Same Type as Pfizer’s

Moderna’s vaccine is the same type as Pfizer’s, made with the same technology. And in scrutinizing early results of a 30,000-person study, the FDA found it also worked just about the same.

The Moderna vaccine was more than 94% effective overall at preventing COVID-19 illness, and 86% effective in people 65 and older. The FDA uncovered no major safety issues.

Recipients tend to experience temporary flu-like side effects that can include fever, fatigue and aches, especially after the second dose as the vaccine revs up their immune system.

Even such a large study can’t detect very rare problems. But the FDA looked carefully for signs of allergic reactions after Britain last week reported some possible reactions among people with a history of severe allergies.

The FDA found no serious allergic reactions in the Moderna study. About 1.5% of vaccine recipients and 1.1% who got dummy shots reported possible smaller, “hypersensitivity” reactions.

Both Moderna’s and Pfizer-BioNTech’s shots are so-called mRNA vaccines. They aren’t made with the coronavirus itself, meaning there’s no chance anyone could catch it from the shots. Instead, the vaccine contains a piece of genetic code that trains the immune system to recognize the spiked protein on the surface of the virus.