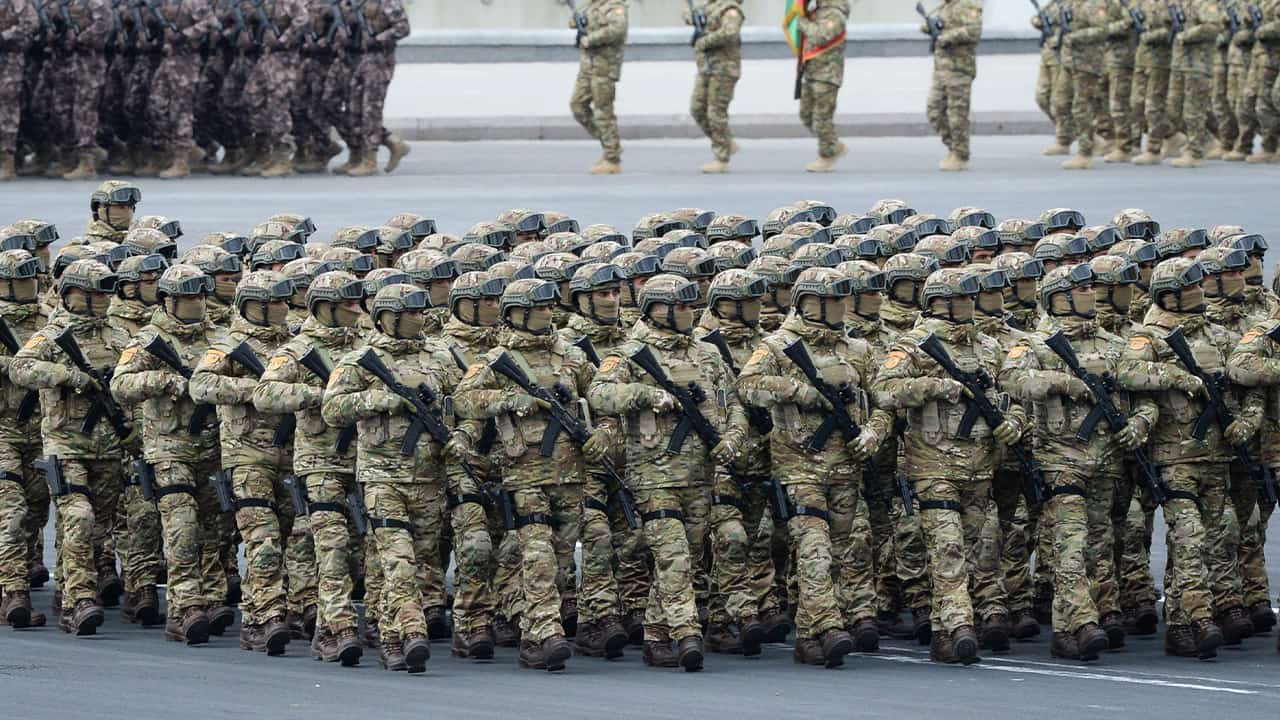 BAKU, Azerbaijan — More than 3,000 troops took part in a military parade in Azerbaijan on Thursday to celebrate reclaiming control over broad swathes of Nagorno-Karabakh and surrounding lands in a conflict with Armenia.

The parade attended by Turkish President Recep Tayyip Erdogan, who strongly backed Azerbaijan, also involved dozens of military vehicles, and a flyby of combat aircraft. The display, which also featured a Turkish commando brigade and Turkish drones, was held a month after a Russia-brokered deal ended six weeks of fierce fighting over Nagorno-Karabakh.

Azerbaijani President Ilham Aliyev showered Turkey with praise, hailing its support for the ex-Soviet Caspian Sea nation as “an example of our unity, our brotherhood.”

Nagorno-Karabakh lies within Azerbaijan but was under the control of ethnic Armenian forces backed by Armenia since a separatist war there ended in 1994. That war left Nagorno-Karabakh itself and substantial surrounding territory in Armenian hands.

In 44 days of fighting that began in late September and left more than 5,600 people killed on both sides, the Azerbaijani army pushed deep into Nagorno-Karabakh, forcing Armenia to accept a Russia-brokered peace deal that saw Azerbaijan reclaim much of the separatist region along with surrounding areas.

In his speech, Erdogan reiterated Turkey’s continued support to Azerbaijan, saying that “as long as Turkey and Azerbaijan work hand in glove, they will continue to overcome all difficulties and run from one success to the next.”

Turkey and Azerbaijan Have Shut Their Borders With Armenia

Erdogan voiced hope that Armenia would “take lessons” from its defeat and noted that Turkey was ready to reopen the border with Armenia if it takes unspecified “positive steps.”

Turkey and Azerbaijan have shut their borders with Armenia ever since the Nagorno-Karabakh conflict erupted, a blockade that has weakened the economy of the landlocked country.

“As long as positive steps are taken, we would open our gates, which were closed,” Erdogan said. “It’s not that we want to keep our doors closed to Armenia … we have no enmity with the people of Armenia. Our problem is with the Armenian leadership.”

The Nov. 10 peace deal became a major trauma for Armenians, triggering a month of protests calling for the resignation of the country’s prime minister, Nikola Pashinyan. Pashinyan has refused to step down, describing the peace agreement as a bitter but necessary move that prevented Azerbaijan from taking over the entire Nagorno-Karabakh.

As Aliyev and Erdogan watched the parade in Baku, several thousand people in Armenia’s capital demonstrated in front of the government building to push the demand for Pashinyan to resign. Protesters tried to enter the building but were pushed back by police who arrested scores.