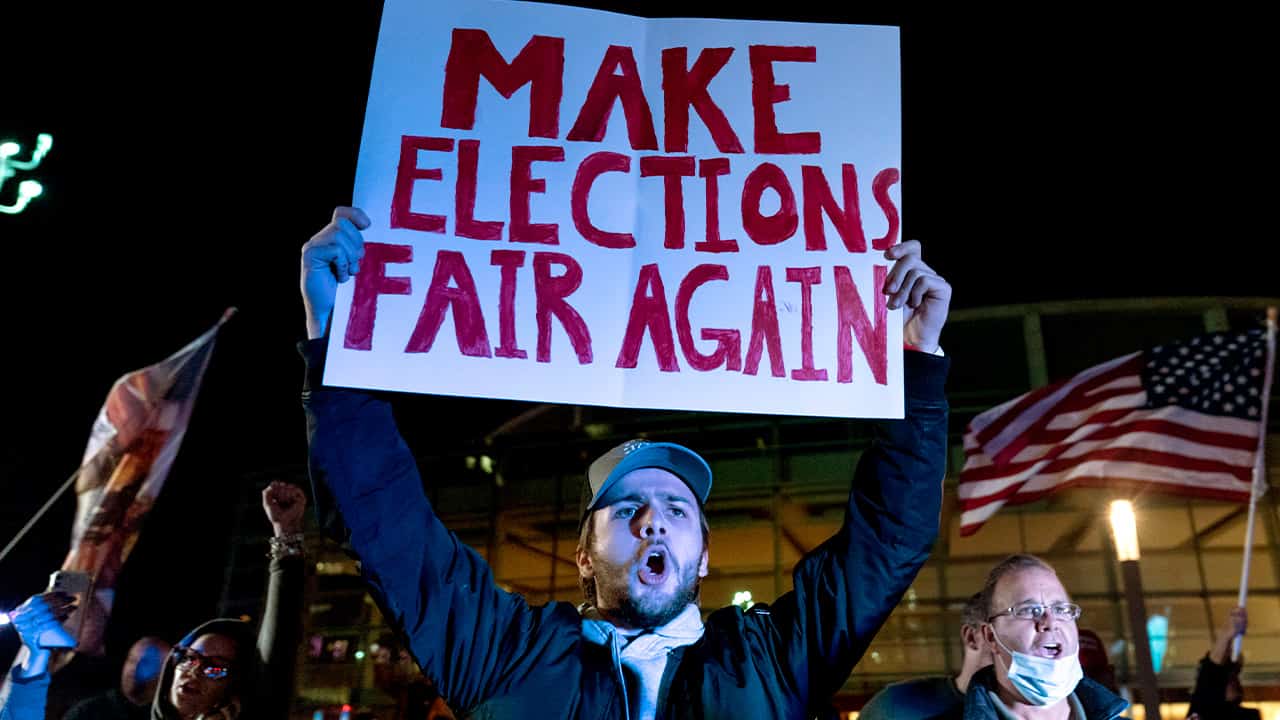 The cellphone video shot in the dark by a woman in a parked car appeared to show something ominous: a man closing the doors of a white van and then rolling a wagon with a large box into a Detroit election center.

Within hours, the 90-second clip was being shared on news sites and conservative YouTube accounts, offered as apparent proof that illegal votes were being smuggled in after polls closed. Prominent Republicans, including Eric Trump, one of the president’s sons, amplified the falsehoods on social media. Within a day, views of the video shot up past a million.

That single video serves as a powerful emblem of the trafficking in false information that has plagued the presidential election won by Joe Biden. In other videos, photos and social media posts, supporters of President Donald Trump, and most notably the incumbent himself, have raised doubts about the outcome based on problems that did not occur.

Though the clip was quickly discredited by news organizations and public officials — the man depicted was a photojournalist hauling camera equipment, not illegal votes — to many viewers it had its intended effect.

Eric Hainline, a UPS driver from Dayton, Ohio, watched the video and many like it, and said the images reinforced his suspicions that the election was stolen from Trump.

“You don’t know who to believe anymore,” said Hainline, 44. “I think the trust people have is broken.”

Trump and his allies have fomented the idea of a “rigged election” for months, promoting falsehoods through various media and even lawsuits about fraudulent votes and dead voters casting ballots across the country.

While the details of these spurious allegations may fade over time, the scar they leave on American democracy could take years to heal.

“There will always be people who believe the Democrats stole the election in 2020,” said Jennifer Mercieca, a historian of political rhetoric at Texas A&M University. “That will not change.”

In fact, there is no evidence of widespread fraud in the 2020 election. Election officials confirmed there were no serious irregularities and the election went well. Attorney General William Barr said Tuesday the Justice Department has not identified voter fraud that would change the presidential election.

But from the Oval Office, Trump has consistently tried to mislead the nation about the outcome. As a result, cries of voter fraud have persisted loudly in an online media ecosystem where pro-Trump Facebook pages, Twitter accounts and fringe websites readily circulate unchecked or misleading claims about the voting process.

And one of those falsehoods sprang from the cellphone camera of Kelly SoRelle, a Republican from Texas. After shooting her video of the man with a wagon in Detroit, SoRelle took it to a conservative YouTube host who played it for his show’s 5 million subscribers the day after the election. She also gave it to the Texas Scorecard, a website started by Empower Texans, a lobbying group that ranks politicians on a conservative scorecard and is bankrolled by West Texas businessman Tim Dunn. Empower Texans’ PAC has pumped millions of dollars into the campaigns of ultra-conservative candidates. Texas Scorecard posted the video on its website and YouTube page, which collectively racked up 50,000 shares on Facebook. SoRelle did not respond to requests for comment.

Others soon picked up the story, and four hours later, Eric Trump had tweeted it to his 4 million followers. “WATCH: Suitcases and Coolers Rolled Into Detroit Voting Center at 4 AM, Brought Into Secure Counting Area,” he tweeted.

Over the next week, there were nearly 150,000 mentions of wagons, suitcases or coolers of votes in broadcast scripts, blogs and on public Facebook, Twitter or Instagram accounts, according to an analysis that media intelligence firm Zignal Labs conducted for the AP.

An investigative reporter at local TV station WXYZ-TV clarified on Twitter the night the video was first posted that the mysterious man was one of its videographers. He was pulling in a wagon of equipment to relieve the crew inside the voting center. Mentions of the story began to fizzle out on Nov. 5 after news organizations fact-checked the claims, Zignal Labs’ report found.

Some Claimed 100,000 Ballots Were ‘Magically Found’ in Milwaukee

By then, however, many of those fringe websites and Trump associates were busy peddling new claims of voter fraud online.

Some claimed 100,000 ballots were “magically found” in Milwaukee at 3 a.m., when, in reality, the city’s election director, escorted by police, had just delivered thumb drives of data with the count of roughly 169,000 absentee ballots to the county courthouse so the results could be uploaded. Others suggested that Dominion Voting Systems, one of the country’s most widely used voting technology firms, deleted or switched votes — an impossible feat that never happened, the company says, a finding confirmed by the federal agency that oversees election security.

Meanwhile, in lawsuits, tweets and Facebook posts, the Trump campaign started naming voters in Georgia, Nevada and Michigan they believed were dead. Among them was Mrs. James E. Blalock, a Georgia widow who registered to vote using her married name and is alive.

In Georgia, where Biden became the first Democratic presidential candidate to win since 1992, other false claims that voting machines deleted votes for Trump or ballots were tossed into the garbage have littered social media feeds. Propping up those false claims as evidence, fellow Republicans, including the president, accused Georgia’s GOP secretary of state, Brad Raffensperger, of being a “liar” who failed to root out “illegal” votes in the state.

“There are those who are exploiting the emotions of many Trump supporters with fantastic claims, half-truths, misinformation, and frankly, they’re misleading the president as well, apparently,” Raffensperger said at a news conference Monday.

And even as states around the country certify election results showing that Biden won the race, Trump and his closest allies have continued their campaign against the election, reviving debunked falsehoods in front of TV cameras and late-night tweets.

Biden supporter RosaLea Schiavone, of San Diego, said she has watched with horror — but not surprise — as Trump has fanned conspiracy theories about the election’s outcome. She worries the damage will last far longer than one campaign, one term or one presidency.

“This is about fear, what he’s doing. He plays into people’s fear and mistrust,” the 71-year-old said. “It could hurt all of us.”

The President Says He Was Cheated in This Election

The social media platforms have tried to slow the reach of some of those falsehoods about the U.S. election, with both Twitter and Facebook fact-checking false claims on their sites. Since Election Day, Twitter has flagged more than 100 of the president’s tweets about the vote, some of which it prohibited users from sharing, commenting on or liking. Facebook has labeled the president’s misleading posts but not limited users’ ability to spread the falsehoods across its platform. On Wednesday, Trump used Twitter and Facebook to deliver a 46-minute diatribe of misstatements about the election to his collective following of 100 million users on the two platforms.

When the president says he was cheated in this election, 77-year-old Myra C. Ruiz believes him. Any fact-checking of his statements has done little to convince her otherwise.

“I heard two days ago that Trump said he didn’t lose this election; it was taken from him,” said Ruiz, a Trump supporter who lives in New Orleans.

Ruiz is among a sizable majority of Trump backers who believes the election was stolen. A survey last month by Monmouth University found that almost one-third of Americans, and more than 75% of Trump supporters, believe Biden only won because of fraud.

Falsehoods around the election have continued to reach a large audience, with nearly 2.5 million mentions of voter fraud and Stop the Steal across online sites, broadcasts and public social media accounts just last week, according to Zignal Labs’ analysis.

Overwhelmed with claims of problems in the election from the president, media reports and social media posts, Americans are increasingly likely to wonder if the vote can be trusted, said Lisa Fazio, a psychology professor at Vanderbilt University who studies the impact of false information.

“There’s so much repetition of this narrative that there’s voter fraud,” Fazio said. “There’s two benefits of repetition. We know people are more likely to remember something. Repetition also increases belief in a claim.”

But Michael Hobson, a 61-year-old who voted for Trump, has mostly shrugged off the complaints he’s heard from the president about the election and the reports he’s seen about voter fraud on the conservative TV station One America News Network he watches.

“I think he’s wrong,” said Hobson, who lives in Virginia Beach, Virginia. “The amount of (voter fraud) he’s talking about is not going to make a difference anyway.”