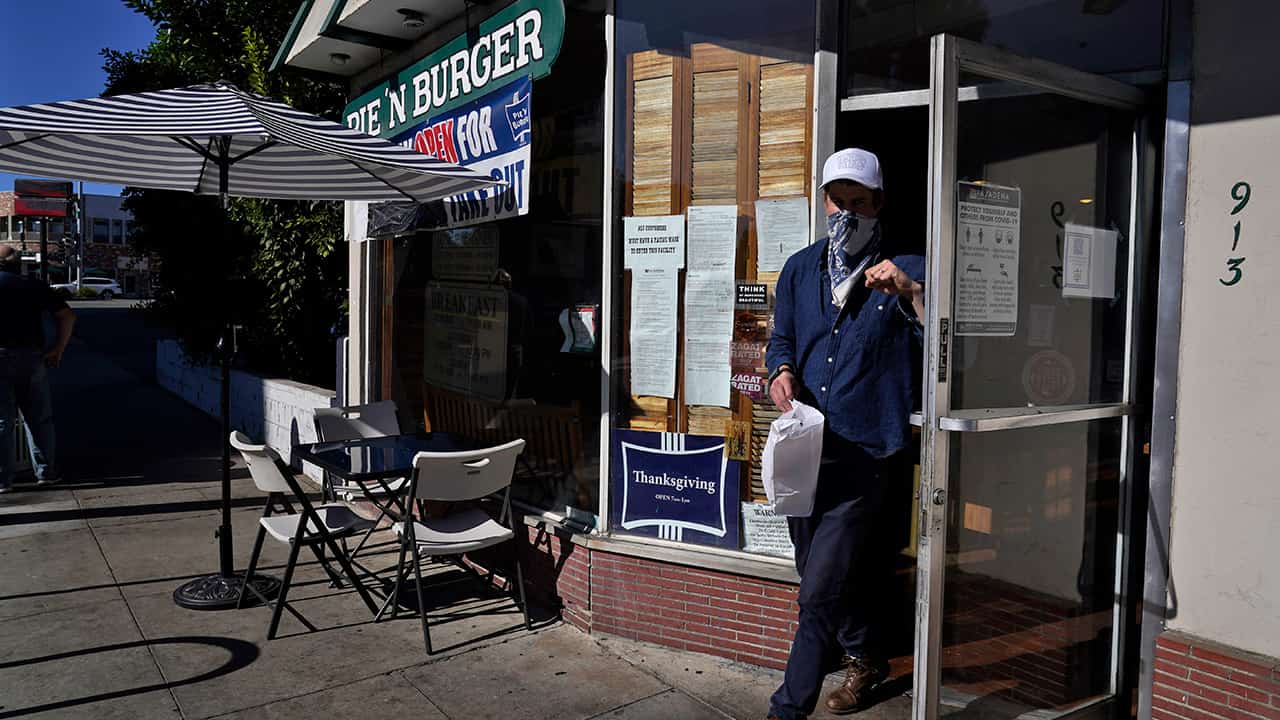 PASADENA, Calif. — It was a rare sight after Los Angeles County restaurants were restricted to takeout to reduce the spread of the coronavirus: tables and chairs set up outside the Pie ‘N Burger shop in Pasadena.

Owner Michael Osborn explained to two men who approached him Monday that the city famous for its Rose Parade had marched to its own beat and kept outdoor dining open.

“God bless Pasadena,” the two exclaimed, placing their order and taking a seat at one of the sidewalk tables, Osborn recounted.

Pasadena has become an island in the center of the nation’s most populous county, where a surge of COVID-19 cases last week led to a three-week end to outdoor dining and then a broader stay-home order that took effect Monday.

The decision by Pasadena health authorities to buck Los Angeles County has been a relief to restaurateurs who have struggled to stay afloat amid closures, ever-changing rules and attempts to keep workers on the job and money in the till. Even Pasadena has made changes since last week, issuing an order taking effect Wednesday that only people in the same household can gather, which applies to outdoor seating.

“We’re not out of the woods yet, but every day that goes by is a blessing that we can keep the outdoor dining open,” Osborn said.

Infections and hospitalizations in Los Angeles County have been rising sharply in the past few weeks, hitting an all-time high Tuesday of more than 7,500 new cases andthe positivity rate going up to 12% from 7% a week ago.

The county’s health order, which only allows restaurants to prepare food to go, applies to 10 million residents in the region except those in Pasadena or Long Beach — cities that have their own public health departments and can set their own rules.

Long Beach, a city of about 460,000, has closed outdoor dining but has not yet adopted the county’s stay-at-home order, which urges people to stay inside as much as possible, further restricts capacity in retail stores and bans all public and private gatherings except for protests and religious services.

Closing dining at 31,000 county restaurants created a backlash among owners and some politicians who say there’s no evidence eating outside is a big risk. Health officials counter that not wearing a mask while eating raises the threat of transmission.

Pasadena Has Mostly Followed the County’s Lead During the Pandemic

Owners argue it will force more people to gather indoors, where the virus is known to spread easier and no one is enforcing rules.

A divided LA County Board of Supervisors rejected a measure Nov. 24 that would have kept outdoor dining open. The Los Angeles City Council passed an urgent resolution asking the county to rescind the order, and restaurants went to court to stop the restrictions, but a judge denied their request.

Pasadena, a city of 140,000 at the foot of the San Gabriel Mountains, has mostly followed the county’s lead during the pandemic.

But the home of the Rose Bowl and California Institute of Technology decided to chart its own course last week. Because it’s smaller and can more closely monitor its 600 restaurants, officials said they chose more aggressive enforcement.

“We literally have seen COVID cases in a large percentage of businesses across the city,” Pasadena spokeswoman Lisa Derderian said. “To single out restaurants was unfair.”

County Public Health Director Barbara Ferrer said she couldn’t predict whether Pasadena’s decision would have an impact on the county’s infection rate. Given the city’s size, it may be able to ensure safety measures are followed, she said.

But she noted that a lack of compliance was not the reason dining was shut down.

“We are closing restaurants for outdoor dining for three weeks because people who are there are not able to wear their face coverings,” Ferrer said. “There’s much greater risk of transmission both to workers and to other people at your table and other people that are eating at the other tables.”

Over the weekend, seven Pasadena restaurants closed after inspectors found violations ranging from staff not wearing plastic shields over masks to seating people indoors, Derderian said. All had been approved to reopen Monday after correcting the errors.

Inspectors also shut down a car show, broke up birthday parties and soccer matches in parks, and warned people exercising that they had to wear masks, she said.

Daily assessments of Pasadena’s virus situation led to more restrictions Tuesday, with only people of the same household allowed to gather.

If the city doesn’t stop outdoor dining altogether, it could be forced to do so by Gov. Gavin Newsom, who suggested a more “drastic” stay-at-home order could be in the works as the state tries to prevent hospitals from being overwhelmed.

Restaurants in Pasadena seemed to get a boost in business over the weekend, though it’s not clear if people came from out of town to eat or were shopping after Thanksgiving.

At Lucky Baldwins, a pub in Pasadena’s Old Town, business picked up Monday around happy hour. A patio that was expanded into an alley was about half full, and servers wore masks and face shields.

Anthony Angulo, who had driven from nearby Altadena to meet a friend, was glad he had an option to get a bite and some beers.

“A lot of these business owners are struggling, and they don’t need to be hamstrung. They’re doing the best that they can,” he said. “Nobody is going inside standing shoulder to shoulder.”

Owner Peggy Simonian said she was relieved Pasadena allowed two locations to stay open. She had to close a sister cafe in nearby Sierra Madre under the county order.

When Newsom issued the nation’s first statewide stay-at-home order in March, just before what would have been a busy weekend celebrating St. Patrick’s Day, Simonian was stuck with corned beef, cabbage and other perishables. Like many business owners, she’s been recovering ever since and worries about any future shutdown and what it could mean to her staff.

“We’re hanging on by a thread,” Simonian said. “This time, if it were to close, it would hit harder because we’re all behind. I feel stuck. I can’t move forward, can’t move backwards, can’t do anything. I can’t make this situation any better.”