Unveiling Economic Team, Biden Pledges, 'Help is on the Way' 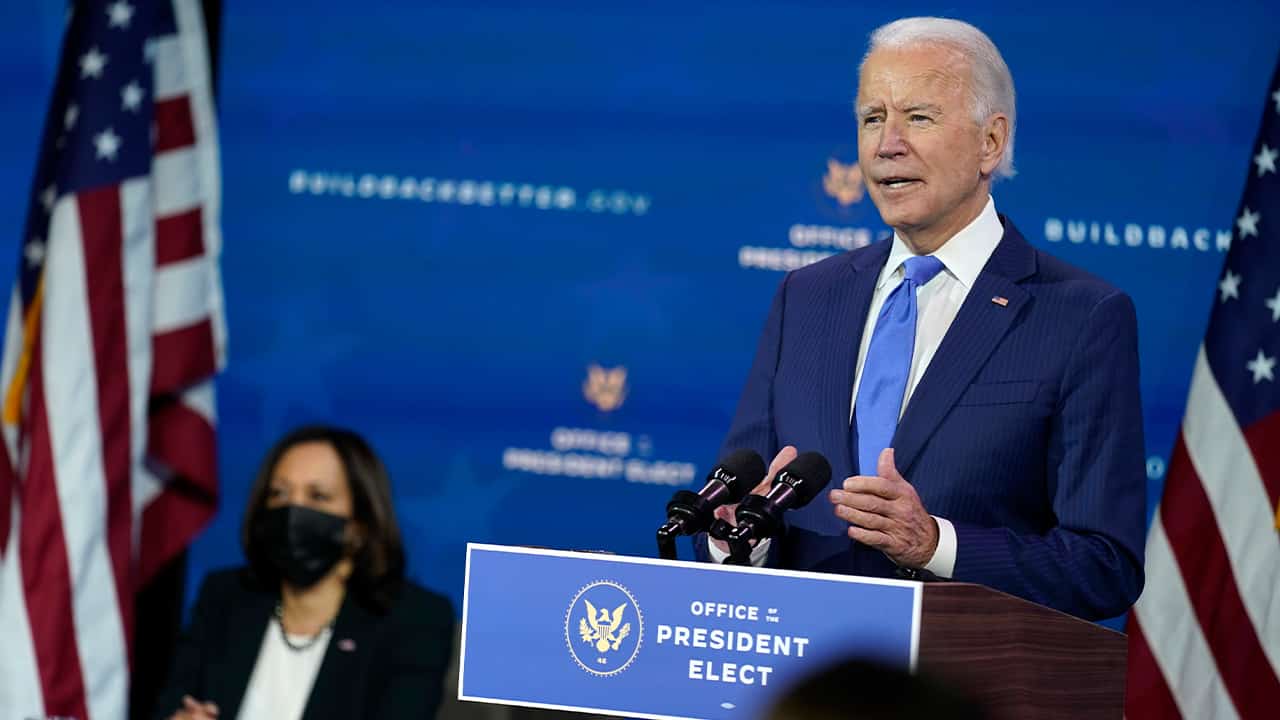 WILMINGTON, Del. — President-elect Joe Biden on Tuesday introduced top advisers he says will help his administration rebuild an economy hammered by the coronavirus pandemic, declaring, “I know times are tough, but I want you to know that help is on the way.”

Biden said he’d chosen a “first-rate team” that is “tested and experienced” to tackle the country’s economic crisis. He picked liberal advisers who have long prioritized the nation’s workers and government efforts to address economic inequality.

Unemployment remains high as the COVID-19 outbreak widens the gulf between average people and the wealthiest Americans. The virus, which has claimed more than 269,000 lives nationwide, is resurgent across the country amid holiday travel and colder weather sending people indoors.

As he did frequently while campaigning, Biden promised that the U.S. would eventually emerge with an economy that is dramatically reshaped to better stamp out economic inequality.

“From the most unequal economic and job crisis in modern history, we can build a new American economy that works for all Americans, not just some,” Biden said as he introduced his choices for some of the government’s top economic posts during a speech at a theater in Wilmington, Delaware, where he has led his transition to the presidency.

Tuesday also marked the president-elect’s first appearance since breaking two small bones in his right foot while playing with one of his dogs over the weekend. He wore a black walking boot and moved gingerly but tried to keep things light. As he emerged from his motorcade, Biden pointed to his boot and lifted his leg briefly to show it off.

Asked about his foot by reporters, Biden responded only, “Good, thanks for asking.”

The injury, while not serious, again intensifies scrutiny on Biden’s age, given that he just turned 78 and is the oldest president ever to be in his first term. Still, his team has tried to keep the focus on building out its government and upcoming policy challenges, chief among them the pandemic and the economy.

Biden repeatedly evoked his work as vice president when the Obama administration oversaw the economic recovery following the 2008 financial crisis, noting that many of those on his newly formed economic team worked closely with him then.

Most of his choices will require confirmation from the deeply divided Senate, where some top Republicans have already begun voicing opposition. Biden said he hopes “that we will be able to work across the aisle in good faith, move forward as one country.”

Janet Yellen, Biden’s nominee for treasury secretary, served as chair of the Federal Reserve from 2014 to 2018, when she placed a greater emphasis than previous Fed chairs on maximizing employment and less focus on price inflation. Biden also named Cecilia Rouse as chair of his Council of Economic Advisers, and Heather Boushey and Jared Bernstein as members of the council.

Yellen called the economic havoc the pandemic has wrought “an American tragedy.”

“To the American people: We will be an institution that wakes up every morning thinking about you,” Yellen said of the Treasury Department, “Your jobs, your paychecks, your struggles, your hopes, your dignity and your limitless potential.”

All of Biden’s Picks Are Outspoken Supporters

Rouse, Tanden and Adeyemo will all require Senate confirmation, and Tanden, in particular, is already drawing heavy Republican criticism.

“Budgets are not abstractions. They are a reflection of our values,” Tanden said during Tuesday’s event.

All of Biden’s picks are outspoken supporters of more government stimulus spending to boost growth — which Biden embraced on the campaign trail — though their proposals could face a difficult reception in Congress, which has stalemated on a new round of economic relief for months.

The prospects for a large-scale deal could hang on the outcome of runoff elections for both Georgia Senate seats. Victories in both would give Democrats control of the chamber — and its agenda —- by the slimmest of margins, but Republican victories will quickly test Biden and his team’s ability to negotiate across the aisle to deliver on their promised relief for Americans.

As he has in recent weeks, Biden repeated calls for Congress to pass immediate pandemic relief funding even before he takes office.

“Right now, the full Congress should come together and pass a robust package for relief,” he said. But Biden added that any package passed during the lame-duck session before the end of the year is “likely to be at best just a start” and said his transition team is “already working on what I’ll put forward in the next Congress to address the multiple crises we’re facing.”

In the meantime, grim economic news is piling up. Federal Reserve Chair Jerome Powell said Monday that the pace of improvement in the economy has moderated in recent months with future prospects remaining “extraordinarily uncertain.”

And Steven Mnuchin, President Donald Trump’s treasury secretary, announced last month that, over the objections of the Fed, he would not grant extensions for five lending programs being operated jointly by the Fed and the Treasury Department that are scheduled to expire on Dec. 31 — including backstops for corporate and municipal debt and the purchase of loans for small businesses and nonprofits.

Related Topics:coronavirusJoe Biden
Up Next