Derek Carr Is the King of the Audacious Audibles in 2020 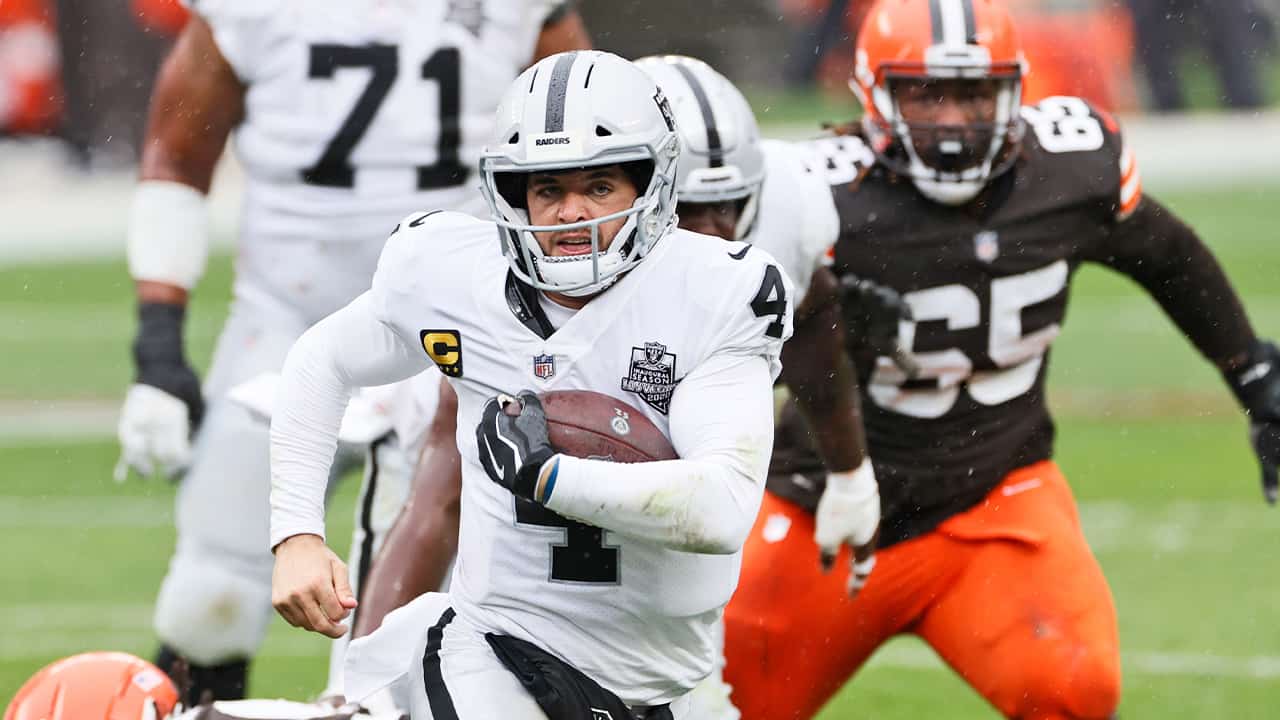 A byproduct of the NFL playing its games in front of few, if any, fans because of the novel coronavirus is that viewers can hear loud and clear all the quarterbacks hollering out their calls, cadences and credos.

Along with all those audibles wrapped in super-secret code.

And Derek Carr has been the biggest star of this pandemic phenomenon.

Carr came up short in his showdown with Patrick Mahomes on Sunday night at empty Allegiant Stadium in Las Vegas, where the Raiders lost a 35-31 thriller to the Kansas City Chiefs.

But the Raiders QB was the social media darling for his audacious audibles, especially when he hollered out “ James Harden!” before handing off for a 6-yard gain.

Oh, the delicious irony of Carr not passing the ball on that play, something even the Raiders’ official Twitter account pointed out.

And, still scratching our heads over this one:

Without crowds roaring, some salty language occasionally gets broadcast, like it did in the Dolphins-Broncos game Sunday.

With the play clock about to expire, Denver had to call timeout just 37 seconds into its first drive, and left guard Dalton Risner threw his hands up in frustration a dropped a f-bomb for all to hear.

Yes, even over the din of 5,351 fans, the last crowd that will be allowed into Empower Field at Mile High this season because of a surge in COVID-19 cases in Colorado.

But the most entertaining phrases are coming from the mouths of quarterbacks, and Carr is king.

In the first Raiders-Chiefs matchup of the season, Carr hollered out “Bruce Springstein!” and “Joe Montana!”

In Las Vegas’ opener, he yelled out, “Tiger Woods!” and “Cindy Gruden!”, the wife of his his head coach.

That prompted Jon Gruden to joke, “I don’t know what he’s been up to at the line of scrimmage, but better keep my wife out of it from now on.”

Other calls worth mentioning from Week 11:

Two quarterbacks posted their first victories as pros Sunday after their coaches chose them over seasoned backups.

Ex-XFL signal-caller P.J. Walker threw for 258 yards and a score in leading Carolina past Detroit 20-0 for the Panthers’ first shutout since 2015.

Walker turned heads in the XFL by throwing 15 touchdown passes as the Houston Roughnecks won five straight before the league folded due to the pandemic. He signed with Carolina after Matt Rhule, his coach at Temple, accepted the Panthers job.

Rhule made Walker the starter over Will Grier less than two hours before kickoff when Teddy Bridgewater was officially ruled out with a knee injury. Rhule said Bridgewater “prepared like a monster” and wanted to play, but he didn’t feel right playing him, especially given Bridgewater’s history of knee injuries.

With Drew Brees out with fractured ribs, Taysom Hill rushed for two touchdowns and passed for 233 yards in his first NFL start at quarterback, and the Saints extended their winning streak to seven games with a 24-9 victory over the Falcons.

Coach Sean Payton gave Hill the nod over free-agent acquisition Jameis Winston and Hill responded by completing 18 of 23 passes and rushing for a team-high 51 yards.

The decision meant a lot to Hill, who persevered through an injury-plagued college career at BYU before starting his NFL career as a 27-year-old undrafted rookie in 2017. And because Hill initially flourished in an unconventional utility role, with duties ranging from change-of-pace option QB to tight end and special teams, he played in 46 previous NFL games before finally getting his first start under center.

“I spent a lot of time reflecting this week,” Hill said.

The officials’ calls that always get the most attention are the head-scratchers, but other times a team deserves every single flag thrown their way. Take the Colts, who fell into a rut and were whistled for five holding calls and an illegal motion penalty in a span of eight snaps Sunday against Green Bay.

Just before that sorrowful sequence, the Packers were flagged for back-to-back infractions, making it eight flags in a 10-play span.

All that stoppage in play gave the Packers a minute, 25 seconds to drive for the tying field goal in the waning seconds before they lost in overtime after Marquez Valdes-Scantling’s fumble.

Valdes-Scantling tweeted after the game that he’d received death threats. On Monday, he said he didn’t actually fear for his life but wanted to “get people to understand we’re humans, too, and we’re not just some number on a jersey.”

“We talked about him, one of the all-time greats in Broncos’ history,” Fangio said. “No. 44, I remember him as a kid growing up, I was an Eagles fan growing up but from afar, I was a Floyd Little fan, too. We did get him one and we are going to get it sent to him.”

The Broncos rushed for a season-best 189 yards, paced by Melvin Gordon’s 84 yards on 15 carries and Phillip Lindsay’s 82 yards on 14 runs. That marked the seventh time since the merger that two Broncos had at least 15 carries and 80 yards rushing.

The first time it happened was on Nov. 7, 1971, when Little and Bobby Anderson accomplished the feat.