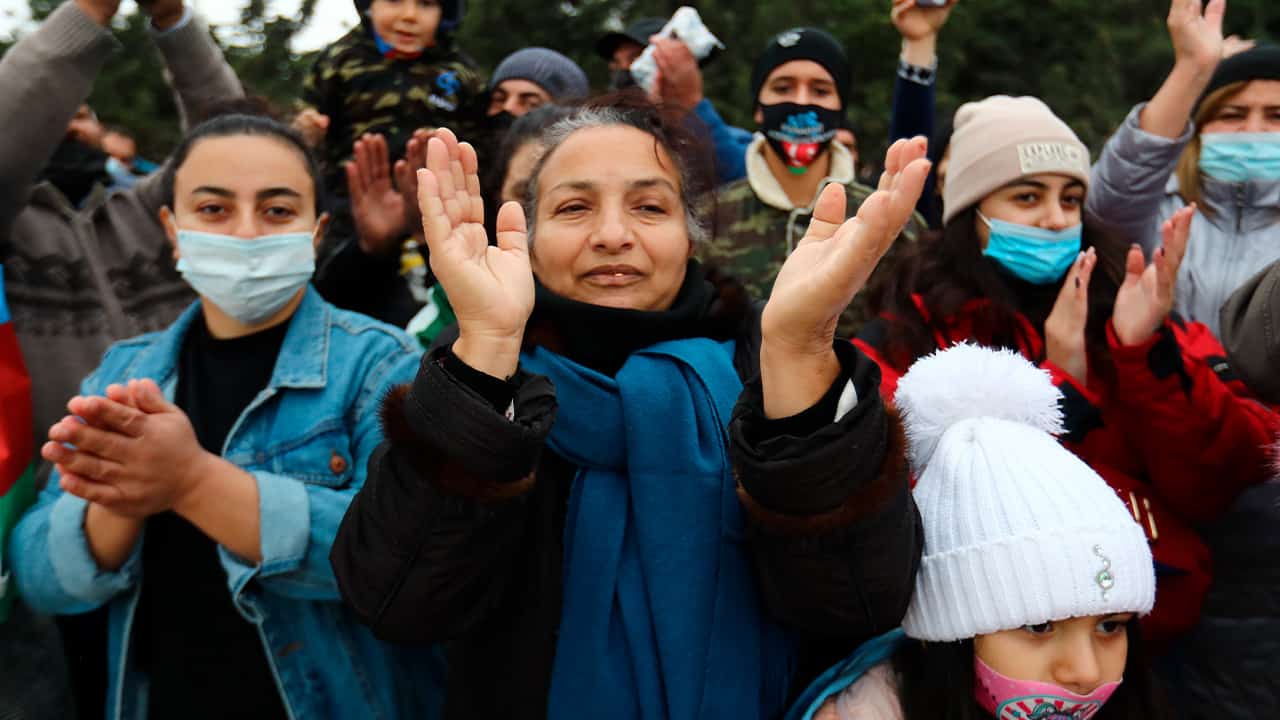 AGHDAM, Azerbaijan — Azerbaijani forces entered the war-ravaged ghost town of Aghdam on Friday, regaining a once-beloved city over a quarter of a century after being driven out by Armenian forces.

Aghdam and the surrounding region of the same name are the first of several territories adjacent to separatist Nagorno-Karabakh to be turned over under a ceasefire that ended six weeks of intense fighting between Azerbaijan and Armenia.

“Today, with a feeling of endless pride, I am informing my people about the liberation of Aghdam,” Azerbaijani President Ilham Aliyev said in an address to the nation. “Aghdam is ours!”

Crowds of people carrying national flags gathered in the Azerbaijani capital, Baku, to celebrate the handover.

Nagorno-Karabakh lies within Azerbaijan but has been under the control of ethnic Armenian forces backed by Armenia since a separatist war there ended in 1994. That war left not only Nagorno-Karabakh itself but substantial surrounding territory in Armenian hands.

Heavy fighting that flared up Sept. 27 marked the biggest escalation of the decades-old conflict between the two ex-Soviet nations in over a quarter-century, killing hundreds of people and possibly thousands more.

Aliyev called the takeover of the region a “great political success” that wouldn’t have been possible without military gains.

“Azerbaijan was able to achieve what it wanted on the political arena after having won a brilliant victory on the battlefield,” the president said.

The agreement, celebrated as a victory in Azerbaijan, has left many Armenians bitter. Mass protests erupted in the Armenian capital, Yerevan, immediately after the peace deal was announced last week, and many ethnic Armenians have been leaving the territories that are to be handed over to Azerbaijan, setting their houses on fire in a bitter farewell gesture.

Although regaining Aghdam is a triumph for Azerbaijan, the joy of returning is seared with grief and anger as Azerbaijanis confront its devastation.

The city of Aghdam was once home to 50,000, known for its white homes and an elaborate three-story teahouse, but it is so ruined that it’s sometimes called the “Hiroshima of the Caucasus.”

After the population was driven out in 1993 by fighting, they were followed by Armenian pillagers who stripped the city bare, seeking both booty and construction materials. One of the city’s happier eccentricities, the bread museum, is in ruins. The cognac factory is gone.

Today, the only structurally whole building is the mosque; from the top of the elaborately patterned minarets, the view is of a vast expanse of jagged concrete and houses reduced to shells, all encroached upon by a quarter-century’s growth of vegetation.

Under Armenian control, the mosque was used for years as a stable for cattle and swine, a defilement that deeply angered Azerbaijnis. The livestock are gone now, but the mosque is decrepit. A few soldiers and a Muslim cleric held prayers within its graffiti-scarred and flaking walls on Friday.

“Now a new period begins for Aghdam,” Aliyev said. “We have big plans.”

Aliyev said his government is aiming to restore Aghdam and the other territories after the areas have been cleared of mines.

“The Armenians believed that after this destruction, the Azerbaijani population would never return to these lands. They were wrong. They do not know that in the heart of the Azerbaijani people — in the soul of our people, native lands live and will live forever,” he said.

News of Their Deaths Sparked Rage in Aghdam

Aghdam was a place many Azerbaijanis felt a special affection for, not least because of its status as the breeding center for the speedy Karabakh horse which is considered the national animal.

Another bitter yet proud memory of Aghdam also remains — it was the home of the first victims of the region’s descent into chaos.

In February 1988, two days after the Nagorno-Karabakh parliament petitioned to link the autonomous region with Soviet Armenia, a group of angry men set off from Aghdam to the regional capital Stepanakert. Before they got there, they were confronted by police and ethnic Armenian villagers; two of the protesters were shot to death.

News of their deaths sparked rage in Aghdam and a crowd gathered weapons to begin to head to Stepanakert. But a local woman stood on the roof of a vehicle and threw her scarf in the road — a gesture that by local tradition forbade men from going further. The dramatic incident was memorialized by Yevgeny Yevtushenko, the Soviet Union’s most renowned poet, who called her action “almost crazy/the great insanity of kindness/the only wisdom that saves us.”

In marked contrast to the thorough destruction of the city of Aghdam, ethnic Armenians have taken assiduous care of one of their major historical sites in the province. The foundations of Tigranakert, which dates back more than 2,000 years, have undergone archaeological excavation and some of what has been found has been placed in an 18th century fortress.

As the Aghdam handover approached, workers this week labored to remove some of the artifacts including a carved stone, which required the efforts of several men to lift.

“These artifacts belong to this city and we are taking these artifacts out to take to our museum so that our Azerbaijani brothers don’t get them,” said one of the workers, who gave his name only as Arman. “Because they will deface them to the very last pebble.”