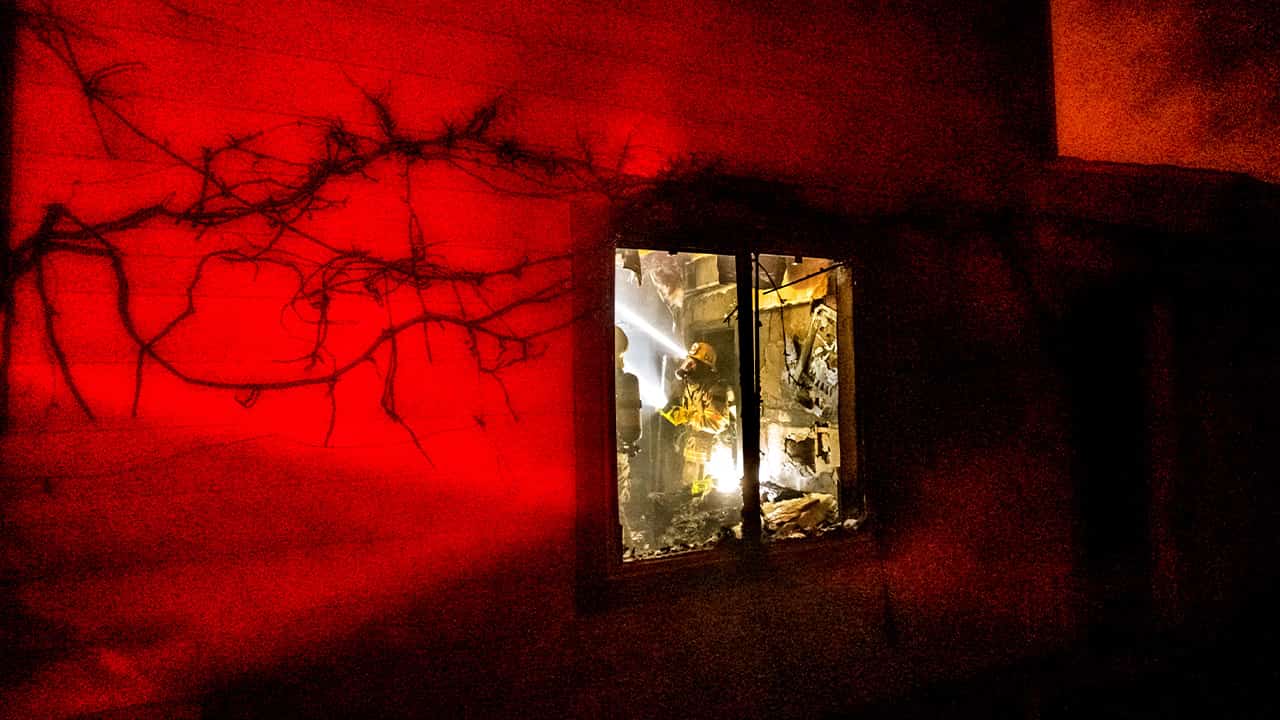 RENO, Nev. — A fast-moving wildfire driven by strong winds destroyed or damaged about 20 homes in a Reno neighborhood and forced the evacuation of hundreds more on the edge of the Sierra Nevada foothills, authorities said Wednesday. It was one of several blazes burning near the Nevada-California border.

Preliminary information indicated that five homes were destroyed and that 15 were damaged in the fire that started Tuesday, said Battalion Chief Mark Winkelman of the Reno Fire Department.

As many as 500 homes were threatened by the blaze that grew to more than two square miles within hours of igniting in brush above the neighborhood, Reno Fire Chief David Cochran said late Tuesday.

There were no immediate reports of injuries, and the cause of the fire was under investigation.

Winkelman said the fire started about 200 yards from the origin point of a 2011 fire that destroyed 27 homes. That fire was started by arcing power lines at a substation, he said.

Winkelman said it wasn’t known whether power equipment played any role in Tuesday’s fire but that dry and windy conditions helped spread the blaze. Wildland fires have been happening in the region year-round in recent years, he said.

Winkelman said the overnight rain helped dampen the fire after firefighters stopped its progress. The moisture helped crews working to extinguish the fire, which was contained around 5% of its perimeter as of Wednesday morning, he said.

Anita Noble of Reno was spraying down a hillside with a garden hose near her daughter’s home, telling KOLO-TV that she “could have been the one to save my daughter’s house and the neighbor’s house.”

Authorities Cut Power to About 7,000 Customers as a Precaution, and Several Roads Were Closed

“We were about ready to leave, and I saw a bunch of smoke, and my daughter said it was coming from up in the canyon, and it wasn’t, it was right below the ravine,” Noble said. “And it was within 10 yards from her property line, so I got the hose and I started spraying. And it helped.”

Mayor Hillary Schieve signed a local emergency declaration and pleaded with residents to stay out of the area. Police Chief Jason Soto said he was increasing patrols in evacuated neighborhoods to help protect homes and businesses.

Authorities cut power to about 7,000 customers as a precaution, and several roads were closed.

Police assisted with evacuations, and the Red Cross set up an emergency shelter at the Washoe County senior center.

Meanwhile, crews north of Reno battled a brush fire that broke out along the California-Nevada line and has forced the closure of State Highway 70 near Vinton and Chilcoot, California. Authorities said some buildings were threatened.

Another fire about 100 miles to the south broke out around noon Tuesday in California’s Mono County near the Nevada border and exploded to about 7 square miles, burning into the tiny community of Walker before wet weather moved in.

“It did rain all night, the fire looks to be pretty much out,” said Sarah Roberts, spokeswoman for the county sheriff’s office.

Some homes were believed burned in Walker but there were no immediate details available on how many, Roberts said.

Travel through the area remained halted.

Rain and snow were expected to continue through the day but winds calmed down.