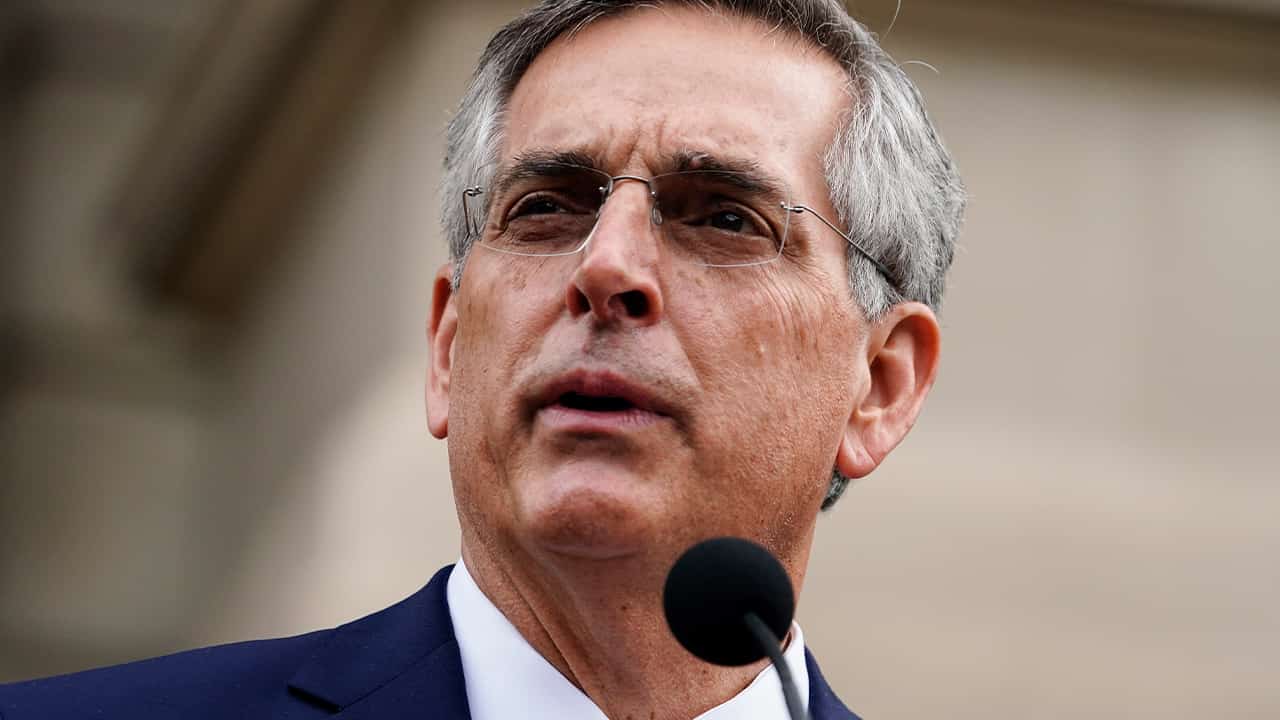 ATLANTA — Georgia’s secretary of state is a man on an island, and the political flood is rising fast, as President Donald Trump and his allies vent their outrage at the fellow Republican and make unsupported claims that mismanagement and fraud tainted the state’s presidential election.

Trump spent the weekend attacking Brad Raffensperger on social media, at one point calling him “a so-called Republican (RINO),” an acronym for “Republican in name only.” Raffensperger punched back, disputing Trump’s claims that he made it easier for Democrats to cheat using mail-in ballots.

The current battle is a switch for Raffensperger. The 65-year-old, bespectacled engineer spent most of his first two years in office taking abuse from Democrats, who filed lawsuits alleging that Georgia, under then-Secretary of State Brian Kemp, engaged in illegal voter suppression in 2018. Kemp, the Republican candidate who narrowly won the governorship over Democrat Stacey Abrams that year, denies the claims.

Also left in Raffensperger’s lap was a breakneck race to replace Georgia’s outdated voting machines in time for 2020 — an undertaking complicated in its closing stretch by the coronavirus pandemic.

Through it all, Raffensperger — currently in quarantine after his wife tested positive for coronavirus — has insisted he’s an impartial administrator of Georgia elections with no desire or agenda to sway the outcome.

Trump and his allies claimed Raffensperger didn’t do enough to root out “illegal” votes.

“The secretary of state has failed to deliver honest and transparent elections,” GOP Sens. David Perdue and Kelly Loeffler — both of whom failed to win enough votes to avoid January runoffs with their Democratic opponents — said last week in a statement, without offering any evidence to back up their assertion. “He has failed the people of Georgia, and he should step down immediately.”

Raffensperger Has Sought to Weather the Beating by Appeasing Trump Supporters

Collins, responding to Raffensperger’s “liar” label, fired back Monday on Twitter: “In a year of political division in Georgia, few things have unified Republicans and Democrats — one of them is Brad Raffensperger’s incompetence as Secretary of State.”

Raffensperger has sought to weather the beating by appeasing Trump supporters. After the Trump campaign asked for a hand recount of all 5 million votes cast in Georgia, Raffensperger chose the presidential election for an audit, which Georgia law now requires for one statewide race each election cycle. The law envisioned just a sample of these votes to be checked in a hand count. But because the margin in the presidential race is so narrow, Raffesnperger said hand-counting all the ballots that were legally cast is the only way to provide confidence in the result.

Not shying away from the fact that he’s a Republican, Raffensperger has said publicly that he wished Trump had won. But he’s also held firm in saying that he has seen no evidence of widespread fraud or voting irregularities — and that he expects Biden’s 14,000-vote lead to hold up once the audit is complete.

“We knew that it was a silly argument,” Raffensperger said of the fraud allegations, in an interview Monday with WDUN-AM radio. “But the hand recount puts that to bed.”

The elections chief has largely been left to fight on his own.

A few Republicans have even publicly supported him.

“From the standpoint of what I’ve seen, there just is no widespread fraud in the election process leading up to the general election,” said Saxby Chambliss, a Georgia Republican who served two terms in the U.S. Senate.

Before Winning Statewide Office, Raffensperger Made a Fortune in Engineering

Georgia has seen years of contention over voting that predate Abrams’ loss. While Republicans have newly labeled Raffensperger as an enemy, some Democrats find themselves partially mollified.

“I think on the whole he responded very well to changing the operations of the election to accommodate the pandemic,” said David Worley, a former Georgia Democratic Party chairman who now serves on the state elections board. Worley said Raffensperger has been a better manager and less partisan than Kemp was as secretary of state.

Before winning statewide office, Raffensperger made a fortune in engineering and won election in 2011 to the city council in the affluent Atlanta suburb of Johns Creek.

“There’s no hidden agenda,” said Ivan Figueroa, who served on the council with Raffensperger. “He speaks his mind straight. You can trust what he says.”

In 2014, Raffensperger won election to the state legislature. In 2018, when Kemp opted to run for governor, Raffensperger successfully ran to replace him, defeating Democratic U.S. Rep. John Barrow.

Last December, Raffensperger angered Democrats still smarting over Abrams’ loss by purging more than 300,000 voters under a Georgia law that removes residents from the rolls if they don’t vote in a seven-year period or respond to contacts. A new law will extend the deadline to nine years.

Raffensperger’s biggest task has been to roll out a new voting system purchased from Dominion Voting Systems that cost more than $100 million. Dominion has been the target of unsupported conspiracy claims spread by Trump and his supporters in recent days.

The new equipment got a rocky rollout during a June primary that was blemished by hourslong waits, in part because the COVID-19 pandemic shrunk the number of polling places and workers.

November’s vote was smoother, with most people voting before Election Day after Raffensperger set up an online system for requesting mail-in ballots.

Another Booming Quarter for Walmart, but Sales Are Slowing