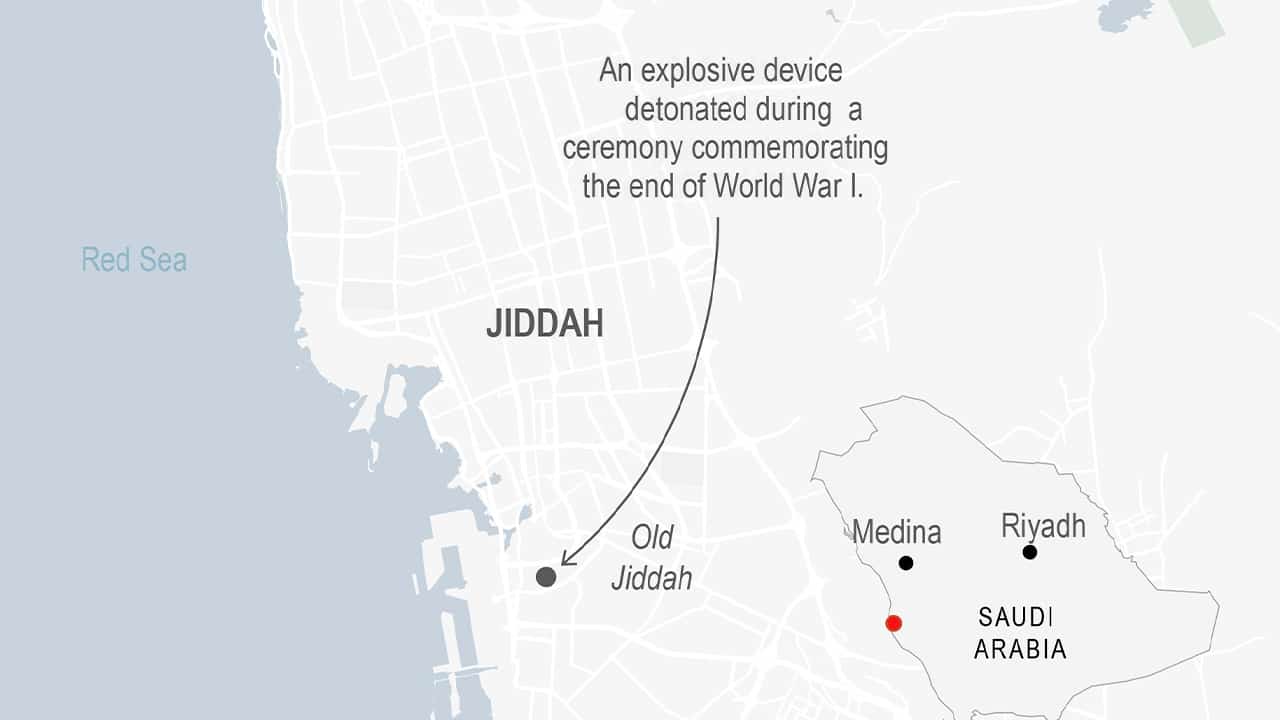 PARIS — Three people were wounded Wednesday when an improvised explosive device targeted a ceremony of French, American, British, Italian and Greek officials commemorating the end of World War I at a cemetery in the Saudi city of Jiddah, according to official statements.

The ceremony was held at a cemetery for non-Muslim dead, French Foreign Ministry officials said.

“Such attacks on innocent people are shameful and entirely without justification,” said a joint statement issued by the embassies of the five countries in attendance. The group also acknowledged the work of Saudi first responders at the scene.

Hours after the attack, Saudi state-media quoted a local official acknowledging the attack and saying a Greek consulate employee and Saudi security man were lightly wounded in the incident. The British government said one U.K. national suffered minor injuries.

The Saudi official said an investigation was underway.

Greece’s Foreign Ministry condemned the attack and said a Greek policeman serving in the Greek Consulate in Jeddah was wounded. The policeman had been accompanying a consulate employee attending the ceremony. The ministry said the wounded policeman was in good health and had been hospitalized but his life was not in danger.

Saudi state television also broadcast from outside the cemetery and said the security situation had stabilized.

Wednesday’s attack follows on the heels of a stabbing Oct. 29 that lightly wounded a guard at the French Consulate in the same city. The stabbing was carried out by a Saudi man, who was arrested. His motives remain unclear.

The Depictions of the Prophet Sparked Protests and Calls for Boycotts

France has suffered two deadly attacks by foreign-born Muslims in the past month. A teacher was beheaded outside Paris for showing caricatures of the Prophet Muhammad to his class for a debate on free expression, and three people were later killed in a church in the southern city of Nice.

The depictions of the prophet sparked protests and calls for boycotts of French products among some Muslims in the Middle East and South Asia. France has urged its citizens in Saudi Arabia and other Muslim-majority countries to be “on maximum alert” amid the heightened tensions.

Wednesday marked the 102nd anniversary of the armistice ending World War I and is commemorated in several European countries.

Nadia Chaaya, an official who represents French citizens living in Saudi Arabia, was at the ceremony when it came under attack. She told The Associated Press there were about 20 people of different nationalities in attendance, making it difficult to say whether French diplomats were specifically targeted.

She earlier told the French network BFM about the moment she heard an explosion as the consul general was near the end of his speech.

“At that moment we didn’t really understand, but we felt that we were the target because directly we saw the smoke and we were of course in panic mode,” she said. “We tried to understand, and we were most of all afraid to see if there was going to be a second wave.”

Jiddah, the Red Sea port city, saw its Ottoman troops surrender to the local troops backed by the British in 1916 amid the war. That sparked the start of the Kingdom of Hejaz, which later became part of Saudi Arabia’s founding in 1932.

Diplomatic Posts Have Been Targeted in the Past in Saudi Arabia

Jiddah’s Non-Muslim Cemetery sits nears the city’s docks, hidden behind trees alongside a major thoroughfare in the city. The Commonwealth War Graves Commission shows just one soldier buried at the cemetery, Pvt. John Arthur Hogan, who died in June 1944.

Across France, which was particularly devastated by years of trench warfare in World War I, ceremonies were held Wednesday to mark the anniversary of the armistice but also to honor all those who have died for France, including during the Second World War and in current military operations abroad and at home, where troops are deployed to protect against terrorist attacks.

Diplomatic posts have been targeted in the past in Saudi Arabia. A 2004 armed assault on the U.S. Consulate in Jiddah blamed on al-Qaida killed five employees. In 2016, a suicide bomber blew himself up near that same U.S. Consulate, wounding two guards.

Meanwhile, French President Emmanuel Macron has come under particular scrutiny among some Muslim leaders for his description of the caricatures of Prophet Muhammad as a protected cornerstone of free speech and France’s secular ideals. This has riled some Muslims who view the depictions as blasphemous and a form of hate speech.

Saudi Arabia’s monarch and top clerics are among those who have condemned the depictions, but top Saudi clerics have also called for calm and urged people to follow the prophet’s example of “mercy, justice, tolerance.”

King Salman is scheduled to deliver an annual address to the nation on Wednesday, laying out policy priorities for the coming year.

Related Topics:JiddahMuslimWorld War I
Up Next