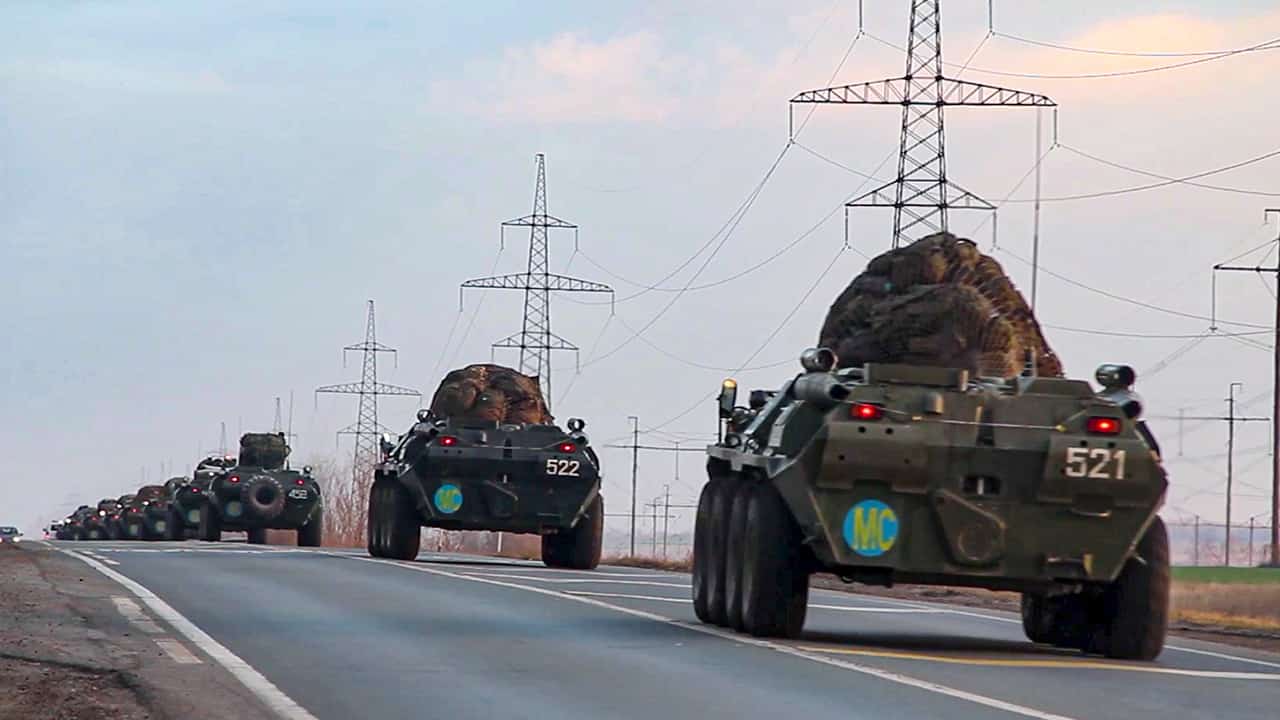 MOSCOW — More than a dozen planes carrying Russian peacekeepers headed for Nagorno-Karabakh on Tuesday, hours after Armenia and Azerbaijan agreed to halt fighting over the separatist region and amid signs this cease-fire would hold where others hadn’t.

The truce came after significant advances by Azerbaijani forces that the Nagorno-Karabakh leader said made it impossible for their side to carry on — but angered many Armenians, who stormed government buildings overnight, demanding the Parliament invalidate the agreement. Dozens of protesters gathered again Tuesday morning in front of the parliament building in the Armenian capital of Yerevan.

Armenia and Azerbaijan have been locked in a conflict over Nagorno-Karabakh for decades. The region lies within Azerbaijan but has been under control of ethnic Armenian forces backed by Armenia since a separatist war there ended in 1994. Heavy fighting erupted in late September — the biggest escalation of the conflict in a quarter-century — and has left hundreds, possibly thousands, dead.

Several cease-fires announced over the past six weeks crumbled almost immediately, but the current agreement appeared to be holding, with neither side reporting any more fighting since it came into force.

It came days after Azerbaijan pressed its offensive deeper into the region and took control of the city of Shushi, which is strategically positioned on heights overlooking the regional capital of Stepanakert.

Armenian Prime Minister Nikol Pashinian said on Facebook that calling an end to the fight was “extremely painful for me personally and for our people.”

But on Tuesday he explained that he was left with no choice, saying the army had told him it was necessary.

“We found ourselves in a situation when there was no alternative to signing the agreement,” Pashinian was quoted by Russia’s Interfax news agency as saying.

Nagorno-Karabakh’s separatist leader Arayik Harutyunyan echoed Pashinian’s sentiment. He said: “Had the hostilities continued at the same pace, we would have lost all of Artsakh (an Armenian name for Nagorno-Karabakh) within days.”

Azerbaijani President Ilham Aliyev referred to the agreement as a “glorious victory” on Twitter, and Azerbaijanis flooded their capital city to celebrate.

Russia’s Defense Ministry said that 15 planes carrying peacekeepers and military equipment departed for the region Tuesday. A total of 1,960 Russian peacekeepers are to be deployed in Nagorno-Karabakh under a five-year mandate.

Russian President Vladimir Putin, who personally announced the agreement overnight, called the fighting in Nagorno-Karabakh “a truly great tragedy” on Tuesday and expressed satisfaction over “agreements reached to end the bloodshed.”

The pact calls for Armenian forces to turn over control of some areas it held outside the borders of Nagorno-Karabakh, including the Lachin region, where the main road leading from Nagorno-Karabakh to Armenia passes through. The agreement calls for the road, the so-called Lachin Corridor, to remain open and be protected by Russian peacekeepers.

The agreement also calls for transport links to be established through Armenia linking Azerbaijan and its western exclave of Nakhchivan, which is surrounded by Armenia, Iran and Turkey.

Nagorno-Karabakh military have reported some 1,300 troops killed in the six weeks of fighting. Azerbaijan hasn’t disclosed its military losses. Scores of civilians have also been killed and wounded on both sides.

Russia, France and the U.S. — co-chairs of the Minsk Group, set up in the 1990s by the Organization for Security and Cooperation in Europe to mediate the conflict — have been trying to secure a cease-fire for weeks.

Moscow faced a particularly delicate balancing act: It has a military base in Armenia and a pact obliging it to protect the country in case of foreign aggression, but also has good ties with Azerbaijan.

Further complicating the matter, Turkey threw its weight behind Azerbaijan and sought to play a bigger role in the peace efforts — something Armenia has vehemently objected to.

Turkish Foreign Minister Mevlut Cavusoglu, who held a telephone call with his Russian counterpart Sergey Lavrov on Tuesday, suggested a possible Turkish role in the monitoring of the cease-fire, saying talks were ongoing.

“We will stand alongside Azerbaijan. This is a great success, a victory for Azerbaijan. Territories that were under occupation for 30 years are being taken back,” Cavusoglu told a news conference.

Azerbaijan’s president announced Tuesday that the country would create a “peacekeeping center” that will host both Russian and Turkish military and monitor the cease-fire. Aliyev and Turkish President Recep Tayyip Erdogan discussed the initiative in a phone call, Aliyev’s office said, and “expressed confidence that the center will contribute to a lasting peace in the region.”

Kremlin spokesman Dmitry Peskov said that setting up a center “for monitoring the conditions of the cease-fire” in Azerbaijan was discussed, but that it has to be outlined in separate agreements.