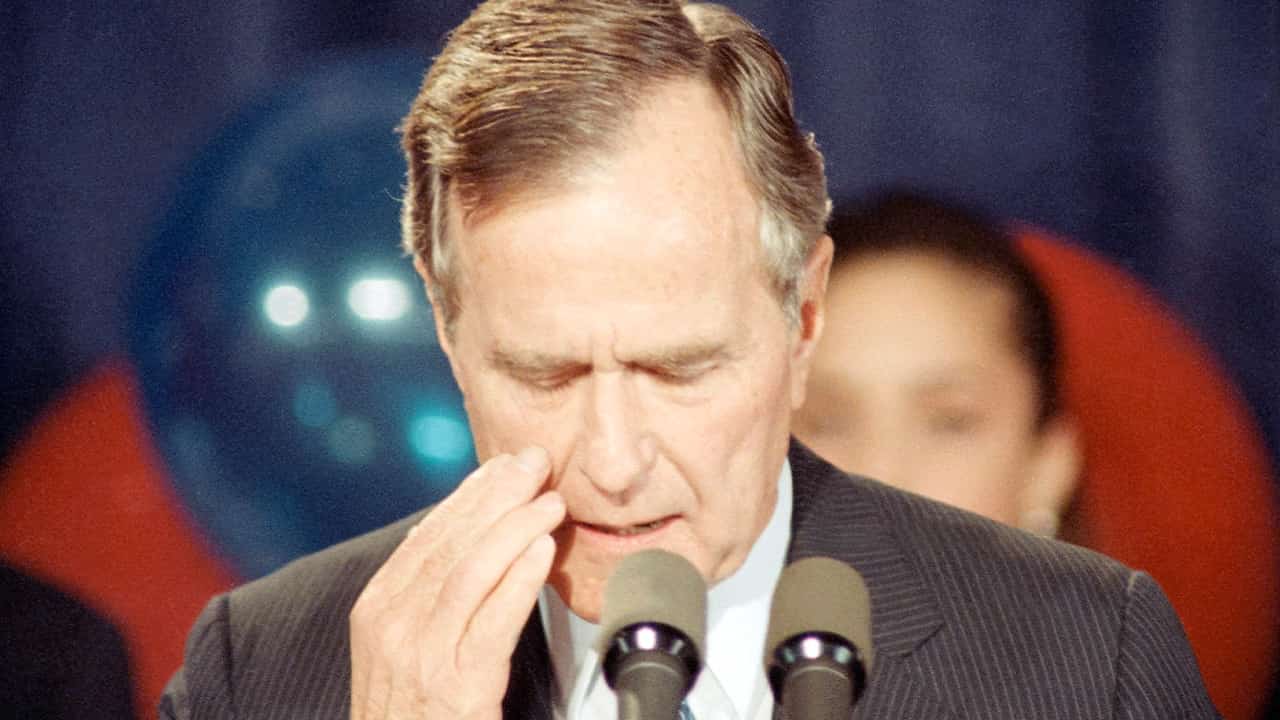 WASHINGTON — Losing presidential candidates have conceded to their opponents in private chats, telegrams, phone calls and nationally televised speeches. Al Gore conceded twice in the same race. President Donald Trump isn’t expected to concede at all — not even with a tweet.

There’s no law that says he has to concede, but if he doesn’t, Trump will be the first presidential candidate in modern times to ignore a tradition that has marked peaceful transitions throughout American history.

Most concessions are gracious — less about the loser and more about closure for the country. Others have a little dry humor mixed in.

After failing to win reelection in 1992, George H.W. Bush quoted Winston Churchill and said he had been given the “Order of the Boot,” according to presidential historian Michael Beschloss. Bush said he could accept defeat because of his “deep devotion to the political system under which this nation has thrived for two centuries.” The concession tradition had a hiccup in 2000 when Gore called George W. Bush to concede and then called him back to recant as the results from Florida went sideways.

Their tight campaign ended with the Florida vote in limbo.

“Let me make sure I understand,” Bush told Gore on the phone. “You’re calling me back to retract your concession?”

When Bush was declared the winner after the Supreme Court halted further recount action, Gore delivered his second concession.

“Just moments ago I spoke with George W. Bush and congratulated him on becoming the 43rd president of the United States. And I promised him that I wouldn’t call him back this time,” Gore said.

Democratic and Republican candidates in the presidential primaries give concession speeches too. In 1976, after he lost the race to be the Democratic presidential nominee, congressman Morris Udall quipped, “The voters have spoken — the bastards.”

Most concession speeches are about mending the country.

After his loss in 2008, Republican Sen. John McCain said: “The American people have spoken, and they have spoken clearly. A little while ago, I had the honor of calling Sen. Barack Obama to congratulate him on being elected the next president of the country that we both love. FILE – In this Nov. 4, 2008, file photo, Sen. John McCain, R-Ariz., gestures to his supporters, while his wife, Cindy watches during his concession speech at the Arizona Biltmore in Phoenix. (AP Photo/Elise Amendola, File)

“I urge all Americans who supported me to join me in not just congratulating him, but offering our next president our goodwill and earnest effort to find ways to come together.”

Richard Nixon, who lost to John F. Kennedy in 1960, said in his concession speech: “One of the individual features of America is that we have political contests — that they are very hard-fought as this one is hard-fought. And once the decision is made, we unite behind the man who was elected.”

When Jimmy Carter lost in 1980, he said matter-of-factly, “The people of the United States have made a choice and, of course, I accept that decision.”

Bob Dole had to concede in more than one race, but he did so both times with his trademark humor.

After Gerald Ford and Dole lost the 1976 presidential election to Carter and Walter Mondale, Dole, quipped: “Contrary to reports that I took the loss badly, I want to say that I went home last night and slept like a baby — every two hours I woke up and cried.” FILE – In this Nov. 3, 1976, file photo, President Gerald Ford, speaking with a hoarse voice in the White House press room in Washington, concedes defeat to Jimmy Carter. First lady Betty Ford read a telegram to a gathering of reporters that Ford had sent to the victor. From left; Susan Ford; Michael Ford, Ford, mrs. Ford, and Gayle, Michael’s wife, who is partly obscured.(AP Photo)

Dole fell back on humor again in 1996 during his concession speech following his loss to Bill Clinton. When Dole talked of having just congratulated Clinton, he had to discourage boos from the crowd.

He later hushed a particularly raucous supporter by smiling and joking, “You’re not gonna get that tax cut if you don’t be quiet.”

Trump isn’t the only candidate to be disgruntled after a loss.

President John Adams was glum, too. He was elected the nation’s second president in 1796, but failed to win reelection.

“Adams was very bitter after losing the election of 1800,” said John Vile, a political science professor at Middle Tennessee State University who wrote a book about presidents and their words of victory and concession. “He slipped out of Washington, D.C., the morning of or the night before the election. He did not stay for the inauguration.”

Vile said in all fairness, there was no clear precedent at the time about what Adams was supposed to do. “But it was interpreted at the time that, at least, he was really unhappy,” he said.

Vile said the tradition of acknowledging defeat started in the late 1890s when Democrat William Jennings Bryan sent Republican William McKinley a telegram of congratulations. It read, “We have submitted the issue to the American people and their will is law.”

Vile said he thinks the funniest concession came from Thomas Dewey, who lost to Harry S. Truman in 1948. In his concession, Dewey likened himself to a corpse and told the story about a drunk at a wake.

As a practical joke, the inebriated man’s friends laid him in a coffin, his hands folded on his chest holding a lily. In the morning, he awoke confused.

“’If I am alive, what am I doing in this coffin?'” Vile said the man wondered. “’If I am dead, why do I have to go to the bathroom?’ It was sort of a humorous way of letting people know that he was still alive and that it was going to be OK.”