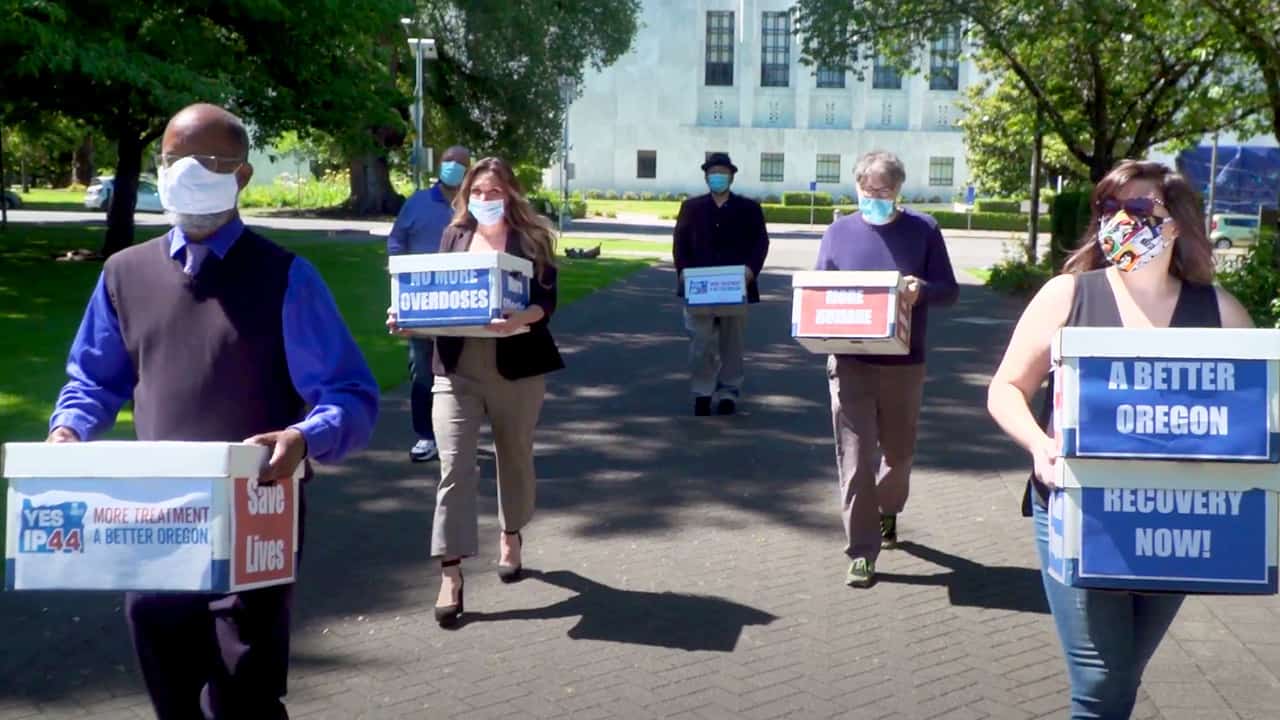 SALEM, Ore. — In a first in the nation, Oregon has rejected charging drug users with criminal offenses, with voters passing a ballot measure that decriminalizes possession of heroin, methamphetamine, LSD, oxycodone and other hard drugs.

“Today’s victory is a landmark declaration that the time has come to stop criminalizing people for drug use,” said Kassandra Frederique, executive director of the Drug Policy Alliance, which was behind the measure. “Measure 110 is arguably the biggest blow to the war on drugs to date,”

The measure, which takes effect 30 days after Tuesday’s election, completely changes how Oregon’s justice system treats those who are found with personal-use amounts of the hard drugs.

Instead of going to trial and facing possible jail time, a person would have the option of paying a $100 fine or attending new “addiction recovery centers” funded by millions of dollars of tax revenue from Oregon’s legalized, regulated marijuana industry.

Passage of the measure makes Oregon, which in 1973 became the first state to decriminalize marijuana possession, a pioneer in America in trying the same with hard drugs.

It may sound like a radical concept, but its backers said making criminals out of drug users — locking them up and burdening them with criminal records that made it difficult to find housing and jobs — was not working.

About 3,700 Fewer Oregonians per Year Will Be Convicted of Felony or Misdemeanor

One in 11 Oregonians is addicted to drugs, and nearly two people die every day from overdoses in the state, the Oregon Nurses Association, the Oregon Chapter American College of Physicians and the Oregon Academy of Family Physicians had said in support of the measure.

“We urgently need a change to save families and save lives,” they wrote.

About 3,700 fewer Oregonians per year will be convicted of felony or misdemeanor possession of controlled substances now that the measure has passed, according to estimates by the Oregon Criminal Justice Commission.

The measure will also likely lead to significant reductions in racial and ethnic disparities in both convictions and arrests, the commission, which is an official state agency, said.

While this approach is new in the United States, several countries, including Portugal, the Netherlands and Switzerland, have already decriminalized possession of small amounts of hard drugs, according to the United Nations.

Portugal’s 2000 decriminalization brought no surge in drug use. Drug deaths fell while the number of people treated for drug addiction in the country rose 20% from 2001 to 2008 and then stabilized, Portuguese officials have said.

“This is such a big step in moving to a health-based approach instead of criminal punishment, and we’re devoting significant new resources to help Oregonians who need it,” said Janie Gullickson, co-chief petitioner of Measure 110.

The measure was being approved by 59% of roughly 2 million votes counted so far, according to the secretary of state’s office.

Oregon voters on Tuesday also legalized therapeutic use of psilocybin mushrooms, with a two-year development period. War veterans with PTSD, terminally ill patients and others suffering from anxiety had voiced support.

The measure requires the Oregon Health Authority to allow licensed, regulated production and possession of psilocybin, exclusively for administration by licensed facilitators to clients.

Before Tuesday’s elections, Oregon was among 11 states as well as Washington, D.C., that had legalized marijuana.

Several other states are following suit. Voters in New Jersey and Arizona on Tuesday approved measures legalizing marijuana. Measures were also ahead in the polls in Montana and narrowly leading in South Dakota.

Related Topics:2020 ElectionOregon
Up Next

Dems Grapple With Disappointment Even With Presidency in Reach