WASHINGTON — The suburbs wouldn’t be the suburbs anymore, the economy would sink into its worst depression ever and police departments would cease to exist. Even America’s older adults would be left to figure out how to get by without heat, air conditioning or electricity.

This is the apocalyptic version of American life that President Donald Trump argues would be the dire consequence of turning over the White House to Democrat Joe Biden.

“He’ll bury you in regulations, dismantle your police departments, dissolve our borders, confiscate your guns, terminate religious liberty, destroy your suburbs,” Trump said in one of many over-the-top pronouncements about Biden in the campaign’s final weeks. Trump typically makes his warning about the fate of suburbia as he showcases his own decision to end federal regulations that govern the placement of low-incoming housing in the suburbs.

Campaign rhetoric can often become heated and hyperbolic as candidates scrap for every last advantage before the votes are counted.

Experts say instilling fear in one’s opponent is usually the primary motivating factor behind such talk as candidates seek to give voters a reason to put a checkmark next to their name on the ballot.

Trump made fear — particularly the fear of immigrants — a major theme of his 2016 campaign. Now, he is giving voters a laundry list of mostly implausible reasons to fear a Biden presidency.

Trump Has Criticized Biden for Saying He’d Follow the Scientists

Trump has criticized Biden for saying he’d follow the scientists, and the president claims the Democrat would shut the country down. In fact, Biden hasn’t said whether he’d endorse large-scale shutdowns of the nation’s economy, if things get drastically worse, like much of the country did in March.

“If you vote for Biden, it means no kids in school, no graduations, no weddings, no Thanksgiving, no Christmas and no Fourth of July together,” Trump said at a rally Wednesday in Goodyear, Arizona. “Other than that, you have a wonderful life.”

Kathleen Hall Jamieson, director of the Annenberg Public Policy Center at the University of Pennsylvania, said Trump’s rhetoric is effective with people who are already disposed to believe such things about Biden. But to a person who is not in the audience, she said, such talk is a “sign of desperation.”

“The problem with the rhetoric is it’s an alienating rhetoric for people who hear it as extreme and improbable,” Jamieson said. It’s also problematic, she said, “because you expect a president of the United States to calibrate his rhetoric to reality in at least some plausible way.” 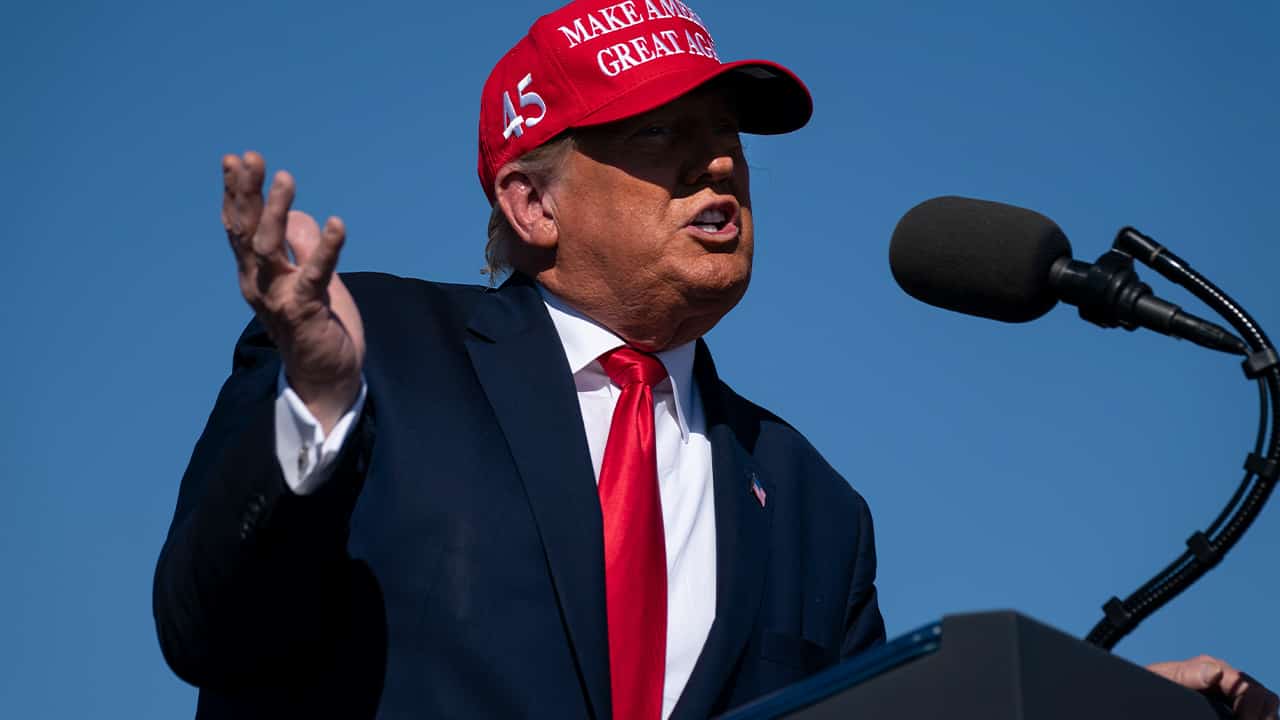 President Donald Trump speaks during a campaign rally at Laughlin/Bullhead International Airport, Wednesday, Oct. 28, 2020, in Bullhead City, Ariz. Trump is painting an apocalyptic portrait of American life if Democrat Joe Biden gets elected. The president claims that if the Democrat takes over, the suburbs wouldn’t be the suburbs anymore, the economy would slump into its worst depression ever and police departments would cease to exist. (AP Photo/Evan Vucci)

Leading Democrats Have Deployed Their Own Dire Talk

Last week in Florida, Trump sought to boost his standing among older Americans angered by his response to the coronavirus by portraying Biden as the one who would do them harm. Trump falsely said Biden’s energy plan “would mean that America’s seniors have no air conditioning during the summer, no heat during the winter and no electricity during peak hours.”

During a summer of unrest that followed the police killings of Black men, Trump sought to portray Biden as beholden to the “radical-left” forces Trump claimed were behind the protests. He also argued that Biden wouldn’t be able to keep such unrest from spreading to the suburbs.

David Zarefsky, who teaches courses about presidential rhetoric at Northwestern, said close examination shows the weakness in Trump’s argument about Biden and the suburbs.

“I think most people would not put it together as being a sound argument,” said Zarefsky, a past president of the Rhetoric Society of America.

Leading Democrats have deployed their own dire talk.

In July, Biden said Trump was the country’s first racist president, which glossed over the presidents before Trump who had held slaves.

“We’ve had racists, and they’ve existed. They’ve tried to get elected president,” Biden said. “He’s the first one that has.”

And in his Democratic National Convention speech, former President Barack Obama said four more years of the Republican in the White House would jeopardize American democracy.

Jamieson said that claim is different because it is grounded in the president’s own norm-busting behavior, such as his attacks on the Justice Department and on the press, or his unfounded challenges to voting by mail and the legitimacy of Tuesday’s election.

“Those who are making the argument about Trump are offering evidence from his rhetoric and actions,” she said, adding that the attacks on Biden are “not justified by what he’s said or done.”

Vanessa Beasley, a professor of communication studies at Vanderbilt University, said all presidents fall back on “us versus them” rhetoric during campaigns, but that once in office the rhetoric is tempered by the reality of having to govern for all.

She cited Obama as an example, noting the disappointment among some of his supporters after he was elected and the aspirational “hope and change” rhetoric that helped power his political rise gave way to more measured discourse.

“The difference with Trump,” she added, “is that he never stops the ‘us versus them.’”

Beasley added that hyperbolic rhetoric can be optimistic, citing President Ronald Reagan’s “Morning in America” campaign from the 1980s as a classic example.

“Hyperbole doesn’t always have to go to fear,” she said.