BOISE, Idaho — The United States is approaching a record for the number of new daily coronavirus cases in the latest ominous sign about the disease’s grip on the nation, as states from Connecticut to Idaho reel under the surge.

The impact is being felt in every section of the country — a lockdown starting Friday at the Oglala Sioux Tribe’s reservation in South Dakota, a plea by a Florida health official for a halt to children’s birthday parties, and an increasingly desperate situation at a hospital in northern Idaho, which is running out of space for patients and considering airlifts to Seattle or Portland, Oregon.

“We’ve essentially shut down an entire floor of our hospital. We’ve had to double rooms. We’ve bought more hospital beds,” said Dr. Robert Scoggins, a pulmonologist at the Kootenai Health hospital in Coeur d’Alene. “Our hospital is not built for a pandemic.”

Among those joining Scoggins at a meeting of northern Idaho’s Panhandle Health District was board member Walk Kirby.

“People are dying, they’re going to keep dying and catching this stuff,” Kirby said. “How many people won’t wear a mask? The same people that won’t get vaccinated for it.”

The seven-day rolling average for new daily COVID-19 cases in the U.S. surpassed 61,140 Thursday, compared with 44,647 two weeks ago. The record was reached July 22 when the rolling average was 67,293 in the midst of a summer outbreak driven largely by surges of the virus in Florida, Texas, Arizona and California.

A Surge in the United States

The U.S. recorded 71,671 new cases Thursday, with several states setting records across the Midwest and West.

The surge in the United States mirrors a similarly widespread spike in Europe, where Rome, Paris and other major cities are reining in nightlife as part of the increasingly drastic measures undertaken to slow the spread of the pandemic. In the Netherlands, a helicopter flew a Dutch COVID-19 patient to an intensive care unit in Germany, the first such international airlift since the pandemic first threatened to swamp Dutch hospitals in the spring.

The head of the World Health Organization warned that countries in the Northern Hemisphere are at a “critical juncture” as cases and deaths continue to rise.

“The next few months are going to be very tough and some countries are on a dangerous track,” said WHO director-general Tedros Adhanom Ghebreyesus at a press briefing on Friday.

Some of the latest developments in the United States:

In South Dakota, the Oglala Sioux Tribe ordered a one-week lockdown of the Pine Ridge Indian Reservation in response to a surging number of COVID-19 cases in the state. Through the morning of Oct. 30, all non-essential travel is banned and non-essential businesses must close.

The tribe posted on its Twitter page that there were 391 active COVID-19 cases as of Thursday on the reservation, which has about 20,000 residents.

The lockdown comes as South Dakota surpassed 9,000 active coronavirus cases on Thursday and reported an all-time high of 973 new cases in one day.

The top health official in one of Florida’s most populous counties discouraged parents from hosting birthday parties for their children, no matter the size.

Dr. Raul Pino, a state health officer in Orange County, said half of the 30 attendees at a recent Sweet 16 party in the Orlando area came down with the virus. Last month, an Orange County high school closed for two weeks after students who had attended a birthday party tested positive.

“Those parties will not only affect those people participating in that activity, but also everyone else they come into contact with when they leave,” said Pino. “We will continue to see consequences if we don’t act super-responsibly.” 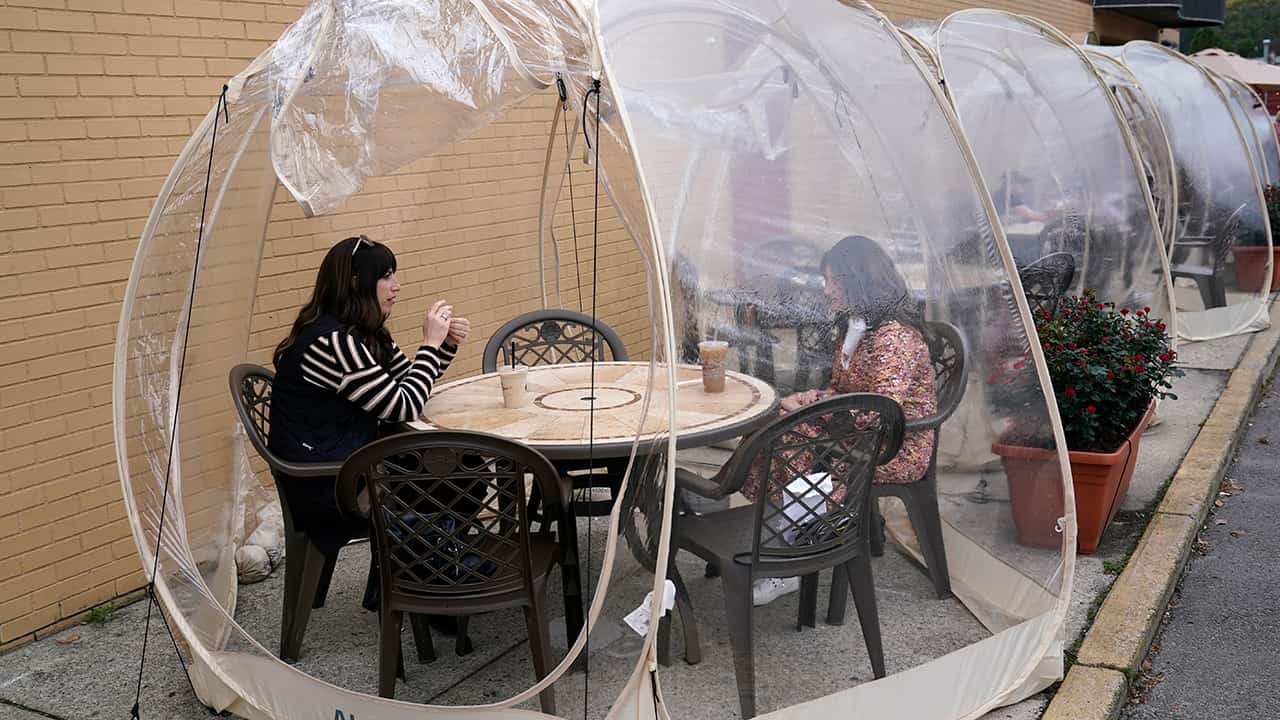 FILE – In this Oct. 22, 2020, file photo, Aviva Markowitz, left, and Rivka Alter enjoy a drink in a protective bubble at the Lazy Bean Cafe in Teaneck, N.J. The United States is approaching a record for the number of new daily coronavirus cases in the latest ominous sign about the disease’s grip on the nation. (AP Photo/Seth Wenig, File)

Massachusetts on Friday implemented a two-week shutdown of indoor ice skating facilities across the state in response to several COVID-19 clusters linked to ice hockey games and practices.

There have been at least 30 clusters of COVID-19 — resulting in 108 confirmed cases — associated with organized hockey activities involving residents from more than 60 cities and towns, according to the state Department of Public Health.

College and professional programs are exempt from the order.

In Texas, Gov. Greg Abbott is sending more medical reinforcements to the El Paso area in response to a surge of coronavirus infections. The Texas Department of State Health Services and the Texas Division of Emergency Management will provide more medical personnel and equipment this week.

El Paso County reported 3,750 new coronavirus infections this week, including 1,161 on Thursday. That number accounts for 17.5% of the 21,321 cases reported this week by the state’s 254 counties.

Even as the health-care situation worsened in northern Idaho, a regional health board voted to repeal a local mask mandate. It acted moments after hearing how the Kootenai Health hospital in Coeur d’Alene had reached 99% capacity.

Kootenai is the third-most populous county in conservative Idaho.

The state is experiencing its largest coronavirus spike since the pandemic began, with new cases increasing statewide by 46.5% percent over the past two weeks. Gov. Brad Little, a Republican, has declined to take steps such as requiring masks statewide to slow the virus’ spread.

Dr. Joshua Kern, vice president of St. Luke’s in the Magic Valley region that includes Twin Falls and Jerome, said Thursday during a virtual press conference that he and other medical professionals are scared.

“Frankly there’s nowhere to send them,” he added. “Boise hospitals are very full, most of the hospitals in this area are experiencing similar issues. Salt Lake’s hospitals have full ICUs. There’s not really a cavalry to come. We’re it.”

For a while, as new COVID-19 cases surged in the Midwest and elsewhere, the level of new cases remained low in the Northeast, which had been hit hard earlier in the pandemic. Several states, including New Jersey and Connecticut, imposed 14-day quarantine requirements for travelers arriving from dozens of states with higher rates of positive tests.

This week, however, rates in New Jersey and Connecticut rose to the point where they qualify for their own quarantine restrictions,

After some confusion and conflicting guidance, the Democratic governors of New Jersey, Connecticut and New York, where rates remain lower, decided to keep their travel rules in place, but not add each other to their quarantine lists.