If you live in Fresno, you may have already seen workers installing small cell transmitters on light poles near your home and getting ready to dig up your street to lay fiber optic cables. If so, then you’re on the front line of the 5G revolution.

To some, 5G is practically the ninth wonder of the world, while to others it’s more like “meh.”

5G proponents say that if you’ve got a slow internet connection — such as when you’re trying to tweet or post on TikTok in a crowded sports arena, or download a movie at home while other family members are on the ‘net — 5G will speed things up.

In some neighborhoods that are now underserved by telecommunications providers, the arrival of 5G will help bridge the digital divide, the city says. 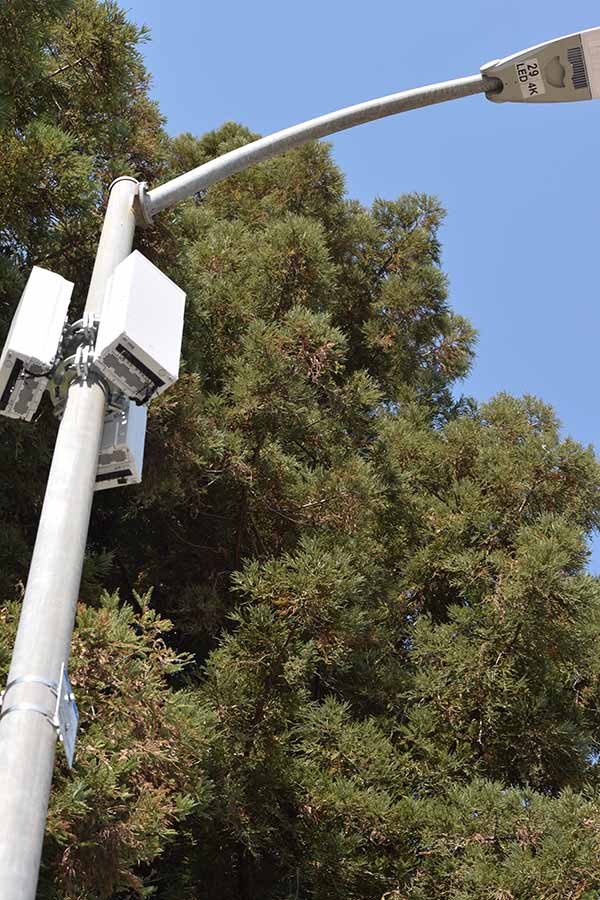 Workers have begun installing 5G antenna arrays on neighborhood streetlight poles in Fresno. The city has agreements in place allowing for up to 1,000 of the “small cell” devices. (GV Wire/Nancy Price)

And you’re going to be hearing more about it. Verizon this week hyped its growing 5G network while Apple promoted its newest iPhone as 5G-compatible.

The city of Fresno has signed deals that allow Verizon and AT&T to put a total of 1,000 5G small cell antenna in neighborhoods — 500 for each company — by renting space on light poles or other spots. Other companies have been talking to the city about installing their own small cell equipment, city spokesman Mark Standriff said.

The locations for the small cell sites remain confidential until the companies pull permits, he said. But the city is monitoring the installations to make sure that the devices are installed throughout the city and not just certain neighborhoods.

“Verizon is starting their installations in the areas with the most demand – and therefore the slower speeds – but intends to follow Council’s request to serve lower income neighborhoods,” Standriff said. “Part of the challenge there is that those areas have older assets, some of them wooden poles, that have to be replaced first.”

Under FCC rules the city of Fresno can collect $270 yearly in rent for each light pole connection. In addition, the city will get $400 yearly per pole for access to the light pole conduit so the companies can line up power for their devices, Standriff said. Verizon wants to fast-track its system installation in Fresno and have it up and running by the end of the year, so it’s paying the city to hire extra help for inspections.

In addition to clamping the antennas — and a sign warning of radiation risks should you entertain any thoughts about shimmying up the light pole to check out the equipment at close range — on light poles, Verizon’s contractors will need to connect the small cell transmitters to the core network using underground fiber optic cable.

Clovis is negotiating a lease agreement with Verizon to use city-owned streetlights for small cell antennas, which are about 10% of the city’s streetlights, said Ryan Nelson, administrative manager with Clovis Planning and Development Services. Most are owned by Pacific Gas and Electric Co., he said.

“We are in the process of drafting a lease agreement which will only allow for the location of small cell equipment on city-owned streetlights meeting certain criteria,” Nelson said. For poles in the city’s right-of-way that are not owned by the city, the carrier will need a letter of authorization along with the application for a permit to install the equipment, he said. 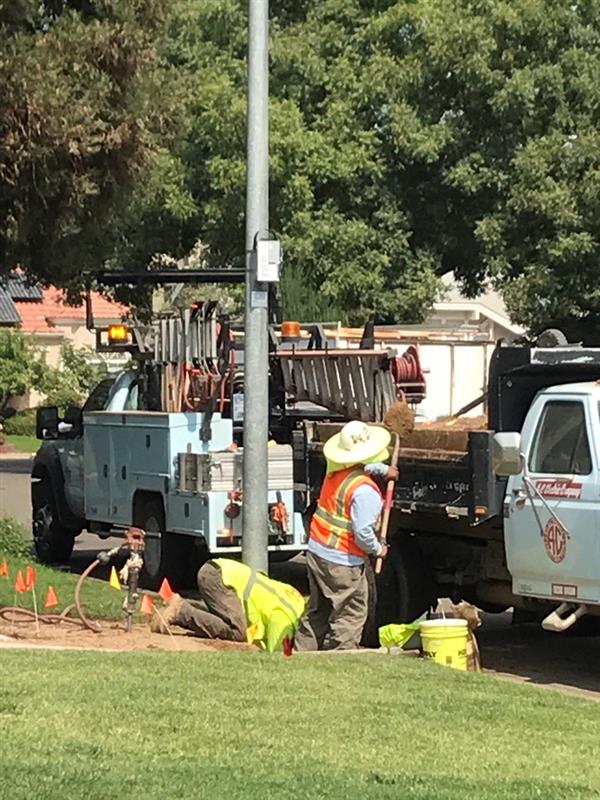 Verizon has begun the process of installing 5G antennas around Fresno and connecting them via underground fiber optic cables. (GV Wire/Nancy Price)

The number of sites that will be installed in Clovis has not been determined, he said.

5G in a Nutshell

So what exactly is 5G? It’s the new technical standard for wireless networks and promises faster speeds and less lag when connecting to the internet. With the increasing number of smart devices — home security systems, thermostats, that virtual assistant on the shelf, your laptops, tablets, and smart phones — the data demand load on the internet continues to grow rapidly.

Data — whether it’s in the form of a downloaded movie, online gaming, your email — is transmitted through wireless systems. 5G allows the data to be conveyed at faster speeds.

“5G speeds, and ever-faster home broadband, will mean that existing applications will get richer, and also that new applications will emerge — new Flickrs, YouTubes or Snapchats. We don’t know what yet,” Benedict Evans, a partner at Silicon Valley venture capital firm Andreessen Horowitz, wrote in a 2019 blog post, the AP reported.

Not Everyone is a Fan

Gizmodo, however, is less impressed. The design, technology, science and science fiction website says that until the carriers can use more of the broadband spectrum, consumers will not see speedier connections.

According to a Gizmodo article this week on the 5G announcements by Verizon and Apple, “We have a long way to go before your iPhone will see anywhere close to the 4 Gbps ideal download speeds (Apple CEO Tim) Cook described — unless you’re standing directly beneath a building with a 5G node while reaching your phone toward the sky. Even then? Doubtful.”

Once 5G is truly up to speed, you’ll need a new smart phone (or whatever device we’re using by then), or else resign yourself to riding along in the 4G slow lane on the information superhighway.

But What About Those Radiation Risks?

Two years ago the City Council of Mill Valley, a small town north of San Francisco, voted to block 5G small cell transmitters from residential neighborhoods because of health concerns.

Are those concerns valid? Scientists say that because the emissions from small cell antenna are low-energy (one reason why so many of them are being installed in Fresno neighborhoods) and are less likely to cause health issues such as cancer or sterility in men. 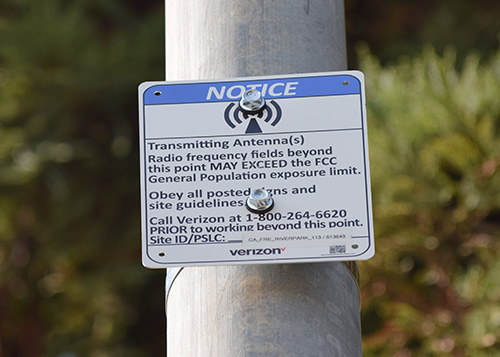 A notice attached to a streetlight pole in Fresno warns about potential exposure to radio frequency waves. (GV Wire/Nancy Price)

But in the absence of updated scientific and medical studies, they say, health impacts also can’t be definitely ruled out.

A blogpost published last year in Scientific American reported that the FCC standards to determine the safety of the 5G transmission system is based in part on studies that are 40 years old.

However, the author, Joel M. Moskowitz, director of the Center for Family and Community Health in the School of Public Health at the University of California, Berkeley, concluded that “At this time, there has been very little research showing that the RF waves used in 5G networks are any more (or less) of a concern than the other RF wavelengths used in cellular communication.”