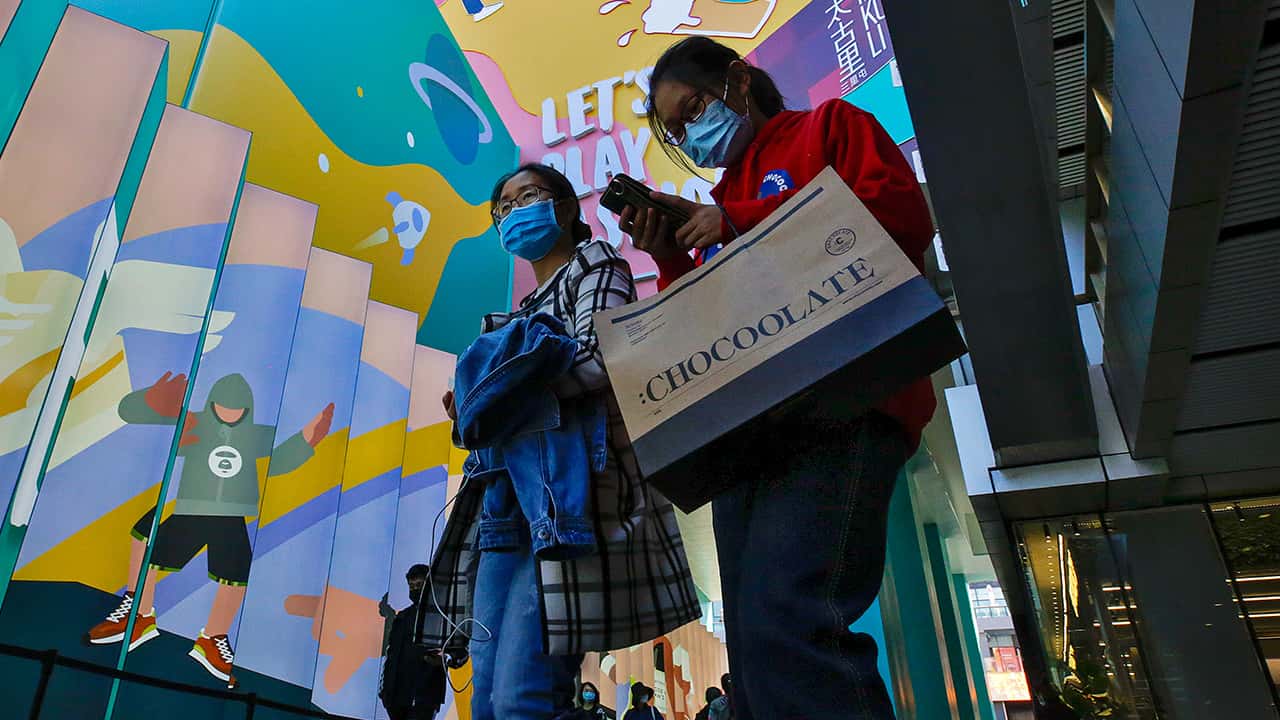 BEIJING — China’s shaky economic recovery from the coronavirus pandemic is gaining strength as consumers return to shopping malls and auto dealerships while the United States and Europe endure painful contractions.

Growth in the world’s second-largest economy accelerated to 4.9% over a year earlier in the three months ending in September, up from the previous quarter’s 3.2%, official data showed Monday. Retail spending rebounded to above pre-virus levels for the first time and factory output rose, boosted by demand for exports of masks and other medical supplies.

China is the only major economy that is expected to grow this year while activity in the United States, Europe and Japan shrinks.

The recovery is “broadening out and becoming less reliant” on government stimulus, Julian Evans-Pritchard of Capital Economics said in a report. He said growth is “still accelerating” heading into the present quarter.

Most Asian stock markets rose on the news of increased activity in China, the biggest trading partner for all of its neighbors. Japan’s Nikkei 225 index added 1.1% while Hong Kong’s Hang Seng climbed 0.9%. Markets in South Korea and Australia also rose. FILE – In this Aug. 14, 2020, file photo, people wearing face masks to protect against the coronavirus walk through a shopping mall in Beijing. China’s economic growth accelerated to 4.9% over a year earlier in the latest quarter as a shaky recovery from the coronavirus pandemic gathered strength. (AP Photo/Mark Schiefelbein, File)

The Economy Contracted by 6.8% in the First Quarter, Its Worst Performance Since at Least the Mid-1960s

China, where the pandemic began in December, became the first major economy to return to growth after the ruling Communist Party declared the disease under control in March and began reopening factories, shops and offices.

The economy contracted by 6.8% in the first quarter, its worst performance since at least the mid-1960s, before rebounding.

The economy “continued the steady recovery,” the National Bureau of Statistics said in a report. However, it warned, “the international environment is still complicated and severe.” It said China faces great pressure to prevent a resurgence of the virus.

Authorities have lifted curbs on travel and business but visitors to government and other public buildings still are checked for the virus’s telltale fever. Travelers arriving from abroad must be quarantined for two weeks.

Last week, more than 10 million people were tested for the virus in the eastern port of Qingdao after 12 cases were found there. That broke a two-month streak with no virus transmissions reported within China.

Industrial production rose 5.8% over the same quarter last year, a marked improvement over the first half’s 1.3% contraction. Chinese exporters are taking market share from foreign competitors that still are hampered by anti-virus controls.

Retail sales rose 0.9% over a year earlier. That was up from a 7.2% contraction in the first half as consumers, already anxious about a slowing economy and a tariff war with Washington, put off buying. Online commerce rose 15.3%.

In a sign demand is accelerating, sales in September rose 3.3%.

“China’s recovery in private consumption is gathering momentum,” said Stephen Innes of AxiCorp in a report.

Economists say China is likely to recover faster than other major economies due to the ruling party’s decision to impose the most intensive anti-disease measures in history. Those temporarily cut off most access to cities with a total of 60 million people.

The International Monetary Fund is forecasting China’s economic growth at 1.8% this year while the U.S. economy is expected to shrink by 4.3%. The IMF expects a 9.8% contraction in France, 6% in Germany and 5.3% in Japan.

Private sector analysts say as much as 30% of China’s urban workforce, or up to 130 million people, may have lost their jobs at least temporarily. They say as many as 25 million jobs might be lost for good this year.

The ruling party promised in May to spend $280 billion on meeting goals including creating 9 million new jobs. But it has avoided joining the United States and Japan in rolling out stimulus packages of $1 trillion or more due to concern about adding to already high Chinese debt.