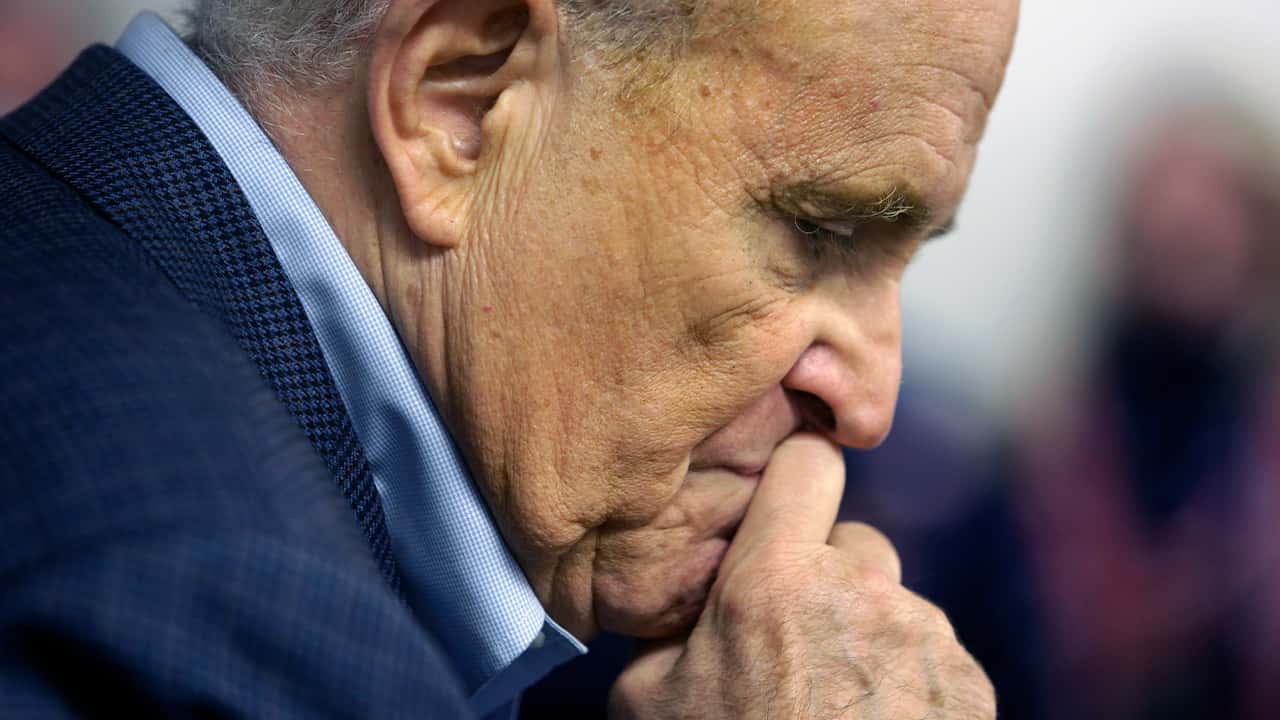 WASHINGTON — A New York tabloid’s puzzling account about how it acquired emails purportedly from Joe Biden’s son has raised some red flags. One of the biggest involves the source of the emails: Rudy Giuliani.

Giuliani has traveled abroad looking for dirt on the Bidens, developing relationships with shadowy figures, including a Ukrainian lawmaker who U.S. officials have described as a Russian agent and part of a broader Russian effort to denigrate the Democratic presidential nominee.

Yet Giuliani says foreign sources didn’t provide the Hunter Biden emails. He says a laptop containing the emails and intimate photos was simply abandoned in a Delaware repair shop and the shop owner reached out to his lawyer.

That hasn’t stopped the FBI from investigating whether the emails are part of a foreign influence operation. The emails have surfaced as U.S. officials have been warning that Russia, which backed Trump’s 2016 campaign through hacking and a covert social media campaign, is interfering again this year. The latest episode with Giuliani underscores the risk he poses to a White House that spent years confronted by a federal investigation into whether Trump associates had coordinated with Russia.

The Washington Post reported Thursday that intelligence agencies had warned the White House last year that Giuliani was the target of a Russian influence operation. The newspaper, citing four former officials, said that assessment was based on information including intercepted communications showing Giuliani had been in contact with people tied to Russian intelligence.

The newspaper said national security adviser Robert O’Brien had warned Trump that information Giuliani brought back from Ukraine should be considered contaminated by Russia, but Trump had brushed off the warning.

Far from distancing himself from Giuliani, Trump has made the purported Hunter Biden emails one of his main talking points in the final weeks of the campaign as he tries to denigrate his Democratic rival.

The Trump-friendly New York Post began publishing stories about the emails Wednesday, saying it had obtained them from the former New York mayor. The newspaper said the emails of Hunter Biden, a California resident, were found in a laptop that had been dropped off for service at a Delaware repair shop by an unidentified man who never picked it up. They said the shop owner turned it over to the FBI, but also made a copy of the hard drive and provided that to Giuliani’s lawyer.

One 2015 email published by the Post purported to show a top adviser for Burisma, the Ukraine gas company where Hunter Biden held a board seat, thanking Biden for giving him an opportunity to meet his father when the older Biden was serving as U.S. vice president. The Biden campaign and a lawyer for Hunter Biden said they had no record of such a meeting taking place. They have not addressed the authenticity of the emails. 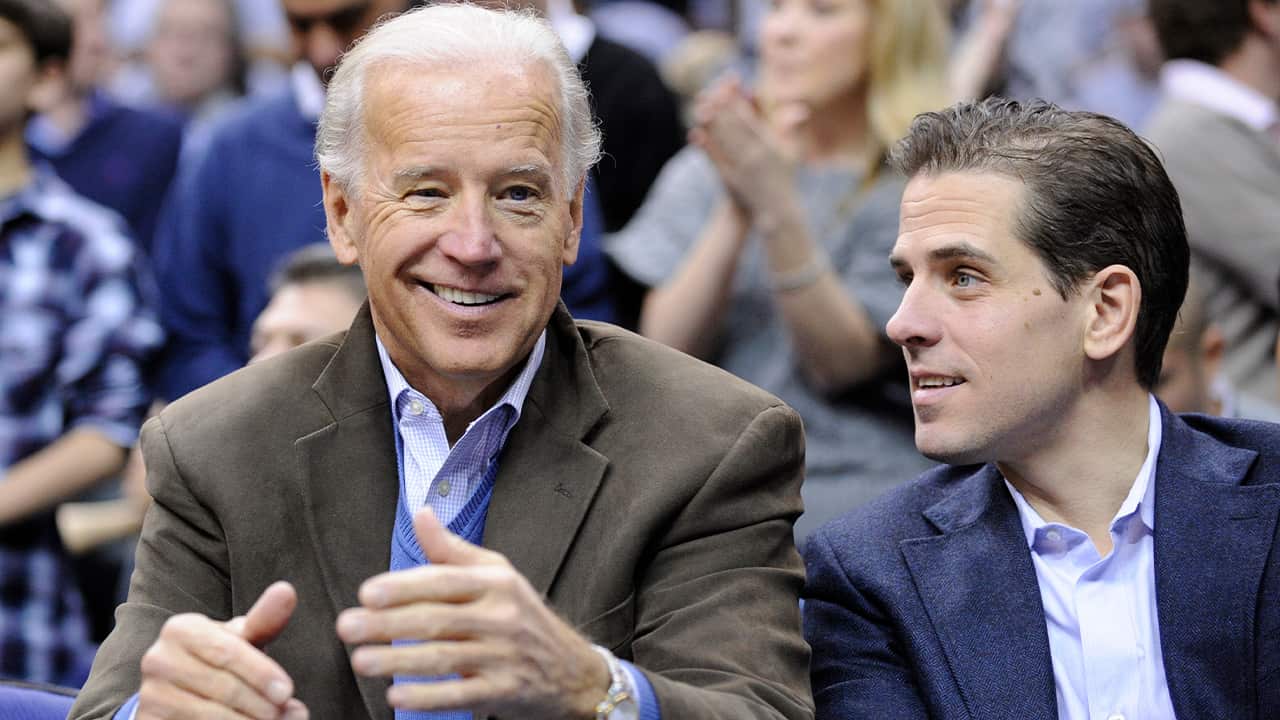 FILE – In this Jan. 30, 2010, file photo, Vice President Joe Biden, left, with his son Hunter, right, at the Duke Georgetown NCAA college basketball game in Washington. Since the early days of the United States, leading politicians have had to contend with awkward problems posed by their family members. Joe Biden is the latest prominent politician to navigate this tricky terrain. (AP Photo/Nick Wass, File)

Giuliani did not respond Friday for a request for comment from The Associated Press. But in an interview Thursday with a SiriusXM show, he asserted that the laptop had been dropped off by Hunter Biden. He said the material was not hacked, and he told Fox News on Friday that the material was “authentic as hell.”

The FBI is investigating whether the emails are tied to a foreign influence operation, according to a person who was not authorized to discuss an ongoing investigation and spoke on condition of anonymity to AP. The exact scope of what was being investigating was not clear.

But the report that intelligence agencies have been concerned about Giuliani are hardly surprising. Andrii Derkach, the Ukrainian parliamentarian who is one of Giuliani’s principal contacts, was mentioned in an August intelligence assessment that described a concerted Russian effort to disparage Biden. A Treasury Department sanction announcement characterized Derkach as an “active Russian agent” for over a decade.

Derkach has leaked recordings of calls Biden had as vice president with Ukraine’s then-leader, audio the Biden campaign contends is heavily edited. Despite his own administration’s warnings on Derkach, Trump has promoted those recordings.

Giuliani has not been shy about discussing his foreign contacts, including with Derkach. In December, Derkach posted on his Facebook page photos of him and Giuliani meeting in Kyiv and said the two had had a meeting to form a new group, Friends of Ukraine Stop Corruption.

Frustration about Giuliani in the West Wing has long run rampant, with those around the president warily watching Giuliani’s efforts to bring down the Bidens and fearful they could boomerang back on the president.

Trump Has Been Mostly Appreciative of Giuliani’s Attack-Dog Style

Giuliani was central to advancing a discredited theory that Ukraine, not Russia, had interfered in the 2016 election. His shadowy efforts to get Ukraine to launch investigations into the Bidens helped create the impeachment case against Trump.

Yet even detractors in the president’s orbit recognize Giuliani as a force in Trump’s defense during the lengthy Russia investigation by the special counsel. The probe detailed extensive contacts between the Trump campaign and Russia but did not allege a criminal conspiracy between the two to tip the election. Yet the effort to undermine Robert Mueller led Giuliani to Ukraine, which many feel directly led to Trump’s impeachment. He was acquitted by the Senate in February.

After long struggling to find a cable-ready defender, Trump has been mostly appreciative of Giuliani’s attack-dog style — and, for a time, his broadsides against Mueller appeared to play a role in driving down the special counsel’s approval ratings. But at other times, the president has expressed private dismay at Giuliani’s scattershot style.

Some around Trump fear that the case being made against the younger Biden has been weakened because Giuliani has become its face.

The Trump campaign has been pushing allegations of corruption against the Bidens for more than a year. The president has advanced the widely discredited theory that the vice president sought to force out Ukraine’s top prosecutor to protect his son. Though Trump associates believe a case can be made that Hunter enriched himself by selling access to his father, they fear that Giuliani’s lack of credibility will cause the allegations to implode.