And that squeaker of a loss came as the COVID-19 pandemic loomed on the horizon but had not yet landed. Since then, the region has reeled from the health and economic crises sparked by the virus.

Even so, the Central Unified Board of Trustees decided to try again and voted in late July to put the $120 million bond measure on the Nov. 3 ballot. The vote wasn’t unanimous — trustee Jason Paul cast the lone dissenting vote in the 5-1 tally. Trustees talked about the awkward timing, given the economic downturn.

But they also talked about their commitment to complete the new high school, now named for Central High School’s late and beloved football coach, Justin Garza. When it opens next August, the high school being built at Grantland and Ashlan avenues will have classrooms, offices, gymnasiums, a kitchen and other facilities ready for students and staff.

Still on the drawing board — and dependent on the passage of Measure D next month — is the Visual Arts and Performing Arts center, or VAPA, and aquatics center that district officials say will be a resource not just for Garza High and Central Unified, but for the entire community.

District officials refer to the multi-story performing arts center as a “crown jewel,” a top-class facility that will attract symphony orchestras and other performers while providing a venue for the district’s award-winning student performers. And they expect it to have an impact on West of Highway 99 similar to what the Shaghoian Concert Hall at Clovis North High School has meant for residents of northeast Fresno and northwest Clovis.

“Think about the opportunities for a lot of our older, retired empty-nesters where they don’t have to go all the way to Clovis North or to downtown to enjoy a beautiful symphony or concert,” district spokeswoman Sonja Dosti said. “We could invite speakers from the Bay Area, Los Angeles, and just provide a wealth of cultural opportunities for this community.

“This community doesn’t have much of anything in terms of that availability. So I think the Visual and Performing Arts Center is just going to be a gift to the community in that regard.”

The VAPA will contain features, such as a “floating” orchestra pit that can be lowered to the basement and raised to the main floor, catwalks, an elevator, and other features that will provide students the opportunity to work and perform in an actual theater.

“It’s definitely going to be state of the art,” superintendent Andy Alvarado said. “It’s a four-story facility that has a mezzanine that’s absolutely beautiful. And it’s going to transform west of (Highway) 99 for sure. It’ll be definitely the crown jewel of the Valley, if not the state.”

Alvarado said Garza High School won’t be a fully comprehensive high school without the aquatics center and visual and performing arts center. And to build out the campus, the district needs about $80 million from Measure D.

But the road to convincing voters to pass the bond measure is a lot steeper this time around.

When the district put an $87 million bond measure, also named Measure C, on the 2016 ballot, it passed by a comfortable margin and had no formal opposition. That Measure C provided funds to help build phase 1 of Garza High School.

There also were no formal opponents to the second Measure C on March’s ballot.

But this time around, the ballot includes arguments both for and against Measure D, and also rebuttals to the arguments in support and opposition to the bond measure.

Long is the treasurer of the Central Taxpayers for School Accountability, No on Measure D 2020 campaign committee, according to a statement of organization filed Oct. 2 with the Fresno County Elections office. The campaign has not yet reported any money raised or spent.

She said in an email to GV Wire℠ that although there was no opposition to the first two Measure Cs, “we are now deeply concerned. With this COVID-19 crisis, we are facing uncertain times. Families are struggling and many have had cuts to their household income. Increasing property taxes will place an unfair burden on families just trying to stay afloat.”

Measure D also has at least two opponents among the crop of candidates who are running for the Central Unified School Board. Jeremy Mehling, a farmer who is running for the Area 6 open seat, and Bret Rush, a county employee running in the special election to fill the remainder of the Area 4 term, both say now is not the right time to ask residents to pay more property taxes.

The bond measure would hike property taxes by about $58 per $100,000 of assessed value, or about $126 yearly on a $200,000 home. If property values do increase later, the tax rate could drop correspondingly, district officials say.

Refinancing to Save Tax Dollars

The district recently announced that $28.8 million worth of series B and C bonds from the 2008 bond measure election had been refinanced to take advantage of lower interest rates, and that refinancing will save taxpayers more than $19.3 million.

McClain is the treasurer of the Citizens for Central Schools, Yes on Measure D 2020 campaign. He and other district officials are not allowed to advocate for the measure during their work day, but can do so when they are off the clock.

In its campaign finance filings, the committee is reporting donations of more than $41,000, primarily from developers, contractors, architects, and lawyers; the money raised is helping to pay for yard signs and other campaign materials. McClain, who also served on the committee that campaigned for Measure C earlier this year, said he expects donations for the Measure D campaign will come in even higher than the $47,500 raised for the pro-Measure C campaign.

But the committee also is looking for support from the community, enlisting the help of student groups and others to help get the word out about Measure D and what it will mean for the district.

‘It’s For Our Children’

Gurdeep Singh Shergill, a third grade teacher at Polk Elementary with a daughter at Central High West and son at Rio Vista Middle School, said he thinks the Yes on Measure D campaign is doing a better job this time around.

Shergill is a common denominator for the last three Central Unified bond measures — he was a signatory on voter guide arguments in favor of the 2016 bond measure and this year’s bond measures.

With five homes in the district, four of which are west of Highway 99, Shergill knows his property tax bills will climb if Measure D passes.

“I don’t mind,” he said. “Anything that goes to our schools.”

Shergill said he disagrees with Central residents who say now is not a good time to increase property taxes, especially for a performing arts center. Performing arts are as important as athletics and other activities for high schoolers, be said.

“I know it’s a lot of money, but why not? It’s for our children,” he said. “I believe we need to provide our children with the best.”

And, speaking as a real estate agent, Shergill agrees that building new schools and the new performing arts center will raise property values west of 99. With the continued growth in the area — Shergill says he’s fielding phone calls from people in the Bay Area, New York, and Texas looking to relocate to Fresno — new schools are needed because the existing ones are already tightly packed. 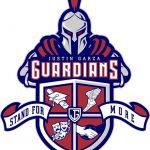 On Monday, the district unveiled the new mascot logo for the Garza Guardians in a ceremony attended by Garza’s widow Regina and her two young children in a dusty spot next to Central East’s Deran Koligian Football Stadium.

Across the field, work continued at the Garza High construction site. The empty acreage between the buildings under construction and Monday’s ceremony is where the district plans to put the aquatics center and performing arts center.

“What you see behind me is the construction site of Garza High School,” Alvarado told the small crowd. “Harris Construction is currently building the first phase, which will include three two-story academic buildings, an administrative building, a building containing two gymnasiums, a wrestling room, a locker room with a kinesiology lab, a kitchen, campus mall— the campus mall is absolutely beautiful. It’s fully enclosed, with a glass ceiling. It almost has that Fashion Fair, or a mall feel to it — it’s not your traditional cafeteria.”

Afterward, Regina Garza said her son Joaquin, 9, and daughter Elena, 5, want to attend the high school named for their father, even though the family lives in Fowler. With an interdistrict transfer, “it is certainly an option for the kids, and their No. 1 choice right now,” she said.

Even though Garza won’t be able to cast a ballot on Measure D, she’s hoping this time around the bond measure gets the votes needed to pass. She’s lobbying friends and others in Central Unified to vote for it.

Garza acknowledged that the political climate has changed in the eight months since the primary, when Measure C lost by only 19 votes. But the  constraints of distance learning have focused attention on just how important schools are to children, she said.

“I hope that the voters realize now more than ever, kids need us to dump in resources into their education, and Measure D is a real and practical way to do it,” she said. “Anything we can do to help the district complete the vision, we should stand behind.”