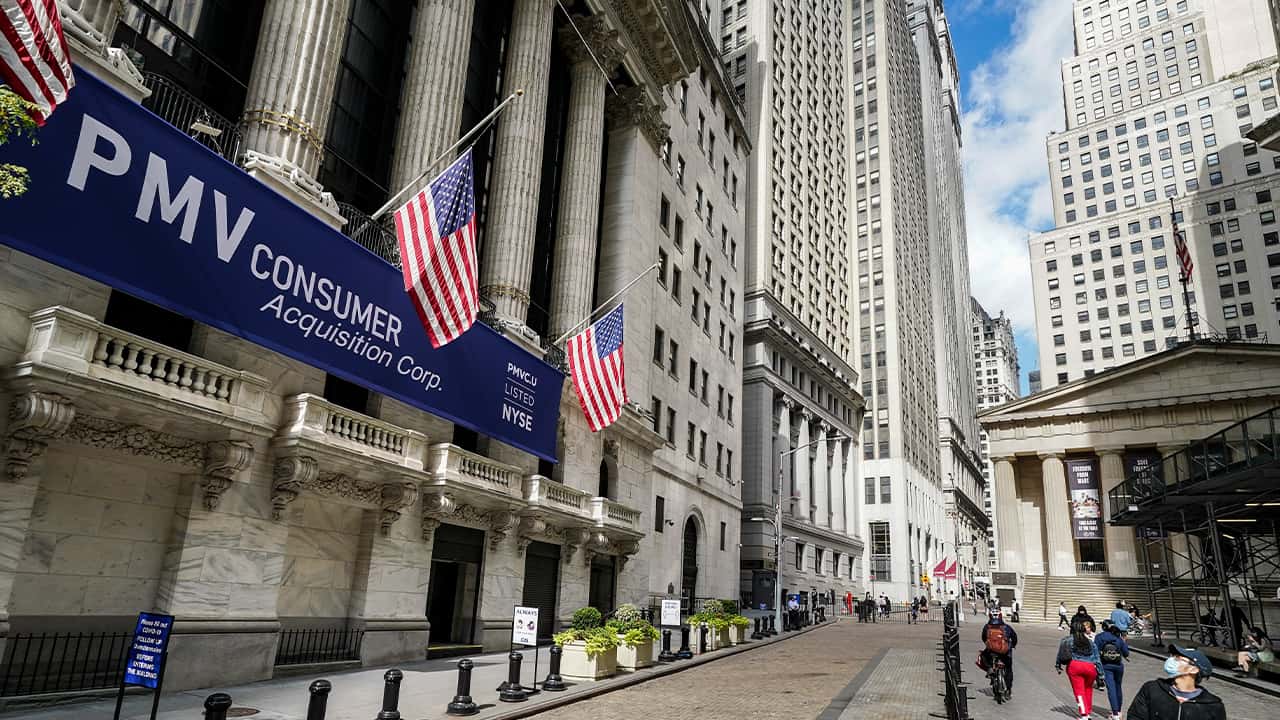 NEW YORK — Stocks are recovering on Wall Street Wednesday after President Donald Trump appeared to backtrack on his decision to halt talks on another rescue effort for the economy.

The S&P 500 was 1.3% higher in morning trading after Trump sent a series of tweets late Tuesday saying he’s open to sending out $1,200 payments to Americans, as well as limited programs to prop up the airline industry and small businesses.

The tweets came just hours after Trump sent the market into a sudden tailspin with his declaration that his representatives should halt talks with Democrats on a stimulus effort for the economy until after the election, saying House Speaker Nancy Pelosi had been negotiating in bad faith. The stakes are high, as economists, investors and the chair of the Federal Reserve all say the economy needs another dose of support following the expiration of weekly jobless benefits and other stimulus Congress approved earlier this year.

The Nasdaq composite climbed 1%, despite a call by Democratic lawmakers for Congress to rein in the Big Tech companies that dominate it and other indexes. The proposal, which follows a 15-month investigation by a House Judiciary Committee panel, could make it harder for Amazon, Apple, Facebook and Google’s parent company to acquire others and impose new rules to safeguard competition.

But much of the market’s attention remains fixed on the prospects for more stimulus for the economy from Washington. Wednesday morning’s gains helped the S&P 500 recoup almost all of its loss from the day before, when Trump’s tweets suddenly sent it from a 0.7% gain to a 1.4% loss.

Just a few hours before Trump made his announcement on Tuesday to halt negotiations, Federal Reserve Chair Jerome Powell had asked Congress to come through with more aid. He said that too little support “would lead to a weak recovery, creating unnecessary hardship.”

Some analysts characterized Trump’s move as likely a negotiating ploy.

“I do not believe hopes of a stimulus deal are now gone forever,” said Jeffrey Halley of trading and research firm Oanda. “One of Mr. Trump’s favorite negotiating tactics, judging by past actions, is to walk away from the negotiating table abruptly. The intention being to frighten the other side into concessions.”

Nineteen minutes before trading opened on Wall Street Wednesday, Trump repeated his Twitter message asking for a standalone measure to send $1,200 payments to Americans. “Move fast,” he said, while mentioning Pelosi specifically, “I Am Waiting To Sign!”

In the longer term, many investors say a big stimulus package may still be possible regardless of what Trump says. A Democratic sweep of the upcoming elections would likely clear the way for a big government program after the transfer of power, and Wall Street has begun to see a blue wave as more likely than before.

Airlines jumped to some of the day’s bigger gains after Trump singled out the industry, asking Congress to “IMMEDIATELY” approve $25 billion for them. Last week, Pelosi had told airline executives to halt the furloughs of tens of thousands of workers with the promise that aid for them was imminent, though a proposal by House Democrats to give the airline industry $28.8 billion failed to advance.

Other areas of the stock market that would benefit most from a strengthening economy were also helping to lead the way. Raw-material producers, financial stocks, and industrial companies had some of the biggest gains among the 11 sectors that make up the S&P 500.

Smaller stocks also rose more than the rest of the market, an indication of rising optimism about the economy’s prospects. The Russell 2000 index of small-cap stocks climbed 1.6%.

The 360-degres spin for Wall Street in less than 24 hours is just the latest bump in its shaky run since early last month. After plunging nearly 34% early this year on worries about the coronavirus pandemic and the recession it would cause, the S&P 500 rallied back to record heights thanks to tremendous aid from the Federal Reserve and Congress, along with signs of strengthening in the economy.

It’s been struggling since setting an all-time high in early September on a range of worries. Besides the clouded prospects for more stimulus from a bitterly divided Congress when parts of the economy have begun to slow, investors are also worried about whether the continuing pandemic will lead governments to put more restrictions on businesses. Tensions between the United States and China are still simmering, and stocks still look too expensive in the eyes of some critics despite their recent pullback.

The yield on the 10-year Treasury ticked up to 0.77% from 0.76% late Tuesday. It had slid following Trump’s initial tweets, after climbing to its highest level since June.

In European stock markets, the German DAX lost 0.4%, and the French CAC 40 slipped 0.6%. The FTSE 100 in London was virtually unchanged.

Related Topics:coronavirusEconomystocksWall Street
Up Next

Pence-Harris Debate to Unfold as Trump Recovers From Virus