'How Long Will It Last?' Nagorno-Karabakh Fighting Rages On 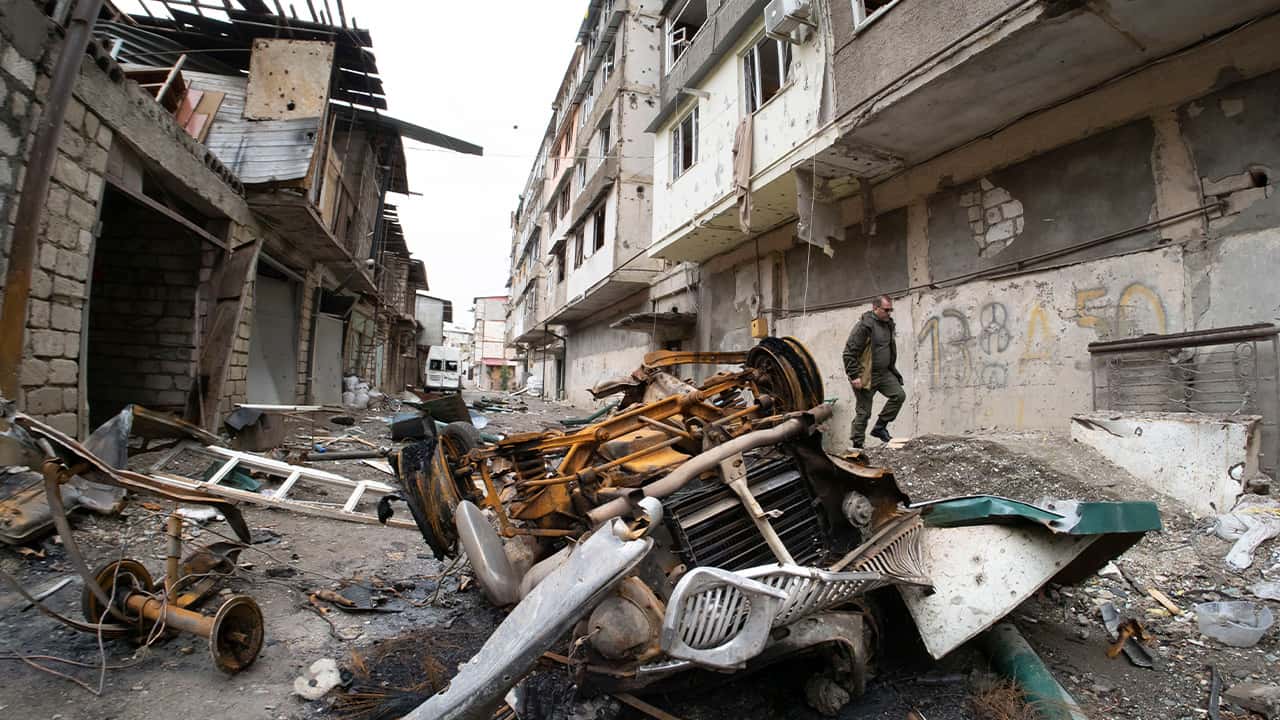 YEREVAN, Armenia — The intense shelling in the separatist region of Nagorno-Karabakh is taking its toll on the civilian population as fighting between Armenian and Azerbaijani forces showed no signs of abating Wednesday, with one resident hunkered down in a shelter overnight exclaiming “How can one stand it? How long will it last?”

Clashes between Azerbaijani and Armenian forces in the region since Sept. 27 have killed hundreds in the worst escalation of hostilities since 1994 when a truce ended a war that raged for several years. Nagorno-Karabakh lies inside Azerbaijan but has been under the control of ethnic Armenian forces backed by Armenia for more than a quarter-century.

Stepanakert, the territory’s capital, has been under intense attacks in recent days. Footage by The Associated Press showed flashes of explosions that could be seen from the city center on Tuesday night.

Local residents have been gathering in shelters to escape the violence, distraught over continued strikes on the city.

“Bombing … buildings and houses are destroyed. We are so afraid of it. How can one stand it? How long will it last?” Sida, one fearful resident who stayed in a shelter on Tuesday night, told The Associated Press without providing her full name.

Armenian Defense Ministry spokesman Artsrun Ovannisian said Wednesday that Stepanakert was being targeted once again by Azerbaijan along with other settlements. Nagorno-Karabakh officials said that non-military facilities in Stepanakert have been hit with missiles and drones. Firefighters work on a car burning, after shelling by Azerbaijan’s artillery in Stepanakert, the self-proclaimed Republic of Nagorno-Karabakh, Azerbaijan, Sunday, Oct. 4, 2020. Heavy fighting between Azerbaijani and Armenian forces in the region since Sept. 27 has killed scores of both servicemen and civilians. Nagorno-Karabakh lies inside Azerbaijan but has been under the control of ethnic Armenian forces backed by Armenia since the 1994. (AP Photo/Karen Mirzoyan)

The EU Expressed Concern Wednesday About the Flare-up of Violence

Azerbaijan has rejected claims of targeting civilian infrastructure in Stepanakert. Hikmet Hajiyev, aide to Azerbaijani President Ilham Aliyev, said in an interview earlier this week that Azerbaijani forces only targeted military objects in and around Stepanakert, acknowledging, however, that “some collateral damage” was possible.

The fighting in the region — involving heavy artillery, warplanes and drones — has continued despite numerous international calls for a cease-fire. Both sides have accused each other of expanding the hostilities beyond Nagorno-Karabakh and of targeting civilians.

The EU expressed concern Wednesday about the flare-up of violence.

“We have seen extremely worrying reports of attacks on populated areas which is taking a deadly toll on civilians. We strongly urge the sides to fully observe their international obligations to protect civilian populations,” EU foreign policy chief Josep Borrell told members of the European Parliament.

Borrell told the lawmakers that the Organization for Security and Cooperation in Europe has no observers on the ground and so the EU can’t rely on much of the information being spread about the way the conflict is developing.

“What we observe is an increasing amount of disinformation which is aimed at mobilizing domestic audiences in both countries and could be used to pull regional actors into the conflict,” he said. “Media reports need therefore to be examined with great precaution.”

Borrell said that he had discussed the conflict with the foreign ministers of both countries, and with those of Russia and Turkey, the main regional players closest to the conflict. Turkey has publicly backed Azerbaijan in the conflict and said it was ready to provide military assistance, should Azerbaijan request it.

Russia is Armenia’s main ally and sponsor and has a military base there. It also co-chairs the Minsk Group under the auspices of the Organization for Security and Cooperation in Europe, set up to mediate the conflict. Moscow has repeatedly called for a cease-fire and peace talks.

“It is important that regional actors refrain from any activity or rhetoric that could inflame things even further,” Borrell said.

He also found Azerbaijan’s determination to continue the fight until Armenia’s withdrawal from the region worrisome.

“Yesterday the Turkish (foreign) minister was in Baku, and I was really concerned when I see that he was expressing the full support for Azerbaijan. My last talk with the Azerbaijan minister was also very much worrisome because he was clearly saying that the fight will continue until Armenia will accept a concrete schedule for withdrawing from Nagorno-Karabakh which is a precondition for talks. Things are getting worse,” Borrell said.

At $480,000 Per Unit, Affordable Housing Coming to Madera