Armenia and Azerbaijan Clash as Iran Works on Peace Plan 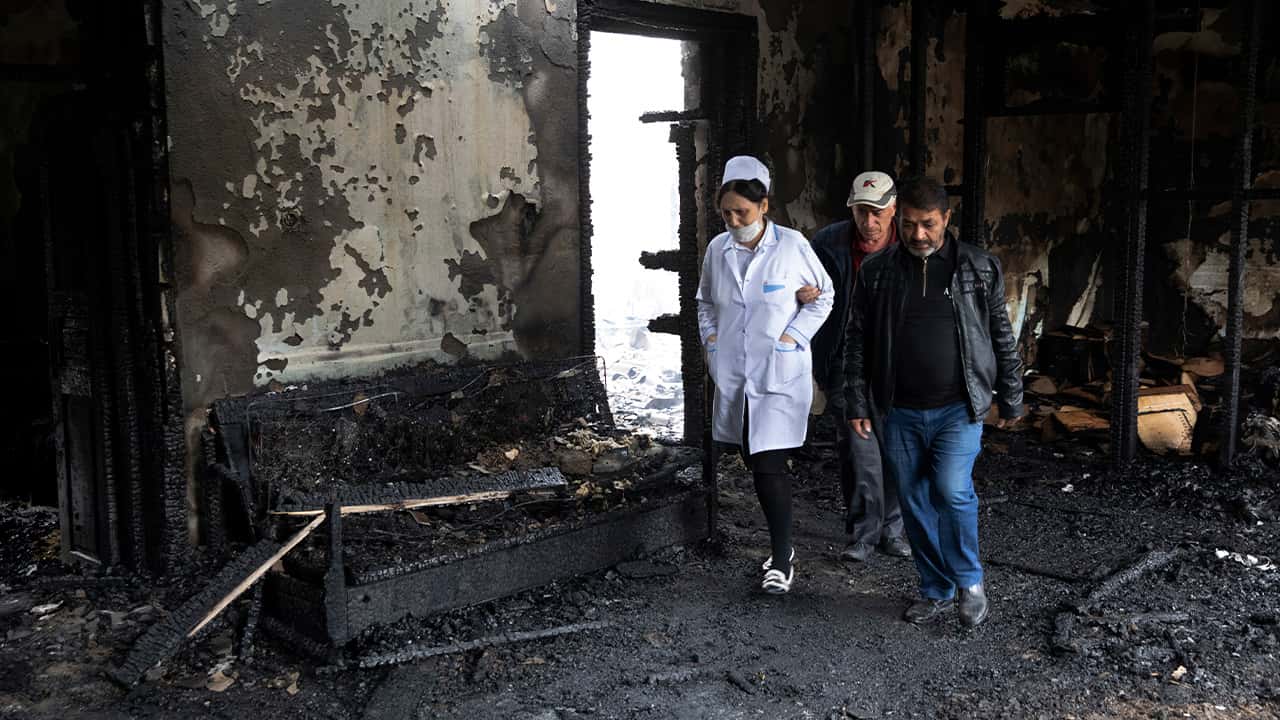 YEREVAN, Armenia — Armenia accused Azerbaijan of firing missiles into the capital of the separatist territory of Nagorno-Karabakh on Monday, while Azerbaijan said several of its towns and its second-largest city were attacked.

Iran, which borders both countries, said it was working on a peace plan for the decades-old conflict, which reignited last month and has killed scores of people on both sides.

The region of Nagorno-Karabakh lies inside Azerbaijan but has been under the control of ethnic Armenian forces backed by Armenia since the end of a separatist war in 1994.

Armenian military officials reported missile strikes in the territorial capital of Stepanakert, which came under intense attacks all weekend. Residents told the Russian state RIA Novosti news agency that parts of the city were suffering shortages of electricity and gas after the strikes.

Armenian Prime Minister Nikol Pashinian said that while Nagorno-Karabakh’s army “confidently controls the situation” in some areas where fighting is going on, it is “very difficult” in other areas.

The Azerbaijani Defense Ministry, in turn, accused Armenian forces of shelling the towns of Tartar, Barda and Beylagan. Ganja, the country’s second-largest city far outside the conflict zone, also was “under fire,” officials said.

Armenia’s Foreign Ministry dismissed allegations of attacks being launched from Armenia’s territory as a “disinformation campaign” by Azerbaijan.

The Fighting Erupted Sept. 27 and Has Killed Dozens

Vahram Poghosyan, spokesman for Nagorno-Karabakh’s leader, warned via a Facebook post that the territory’s forces would target military facilities in Azerbaijani cities in response to strikes on Stepanakert and Shushi, another town in Nagorno-Karabakh.

The fighting erupted Sept. 27 and has killed dozens, marking the biggest escalation in the conflict. Both sides have accused each other of expanding the hostilities beyond Nagorno-Karabakh.

According to Nagorno-Karabakh officials, about 220 servicemen on their side have died in the clashes since then. Eighteen civilians have been killed and 90 others wounded. Azerbaijani authorities haven’t given details about military casualties, but said 24 civilians were killed and 124 wounded.

Nagorno-Karabakh was a designated autonomous region within Azerbaijan during the Soviet era. It claimed independence from Azerbaijan in 1991, about three months before the Soviet Union’s collapse. A full-scale war that broke out in 1992 killed an estimated 30,000 people.

By the time the war ended in 1994, Armenian forces not only held Nagorno-Karabakh itself but also substantial areas outside the territory borders.

Aliyev has repeatedly said Armenia’s withdrawal from Nagorno-Karabakh is the sole condition to end the fighting.

Armenian officials allege Turkey is involved in the conflict on the side of Azerbaijan and is sending fighters from Syria to the region. Armenian Prime Minister Nikol Pashinian said “a cease-fire can be established only if Turkey is removed from the South Caucasus.”

On a trip to Ankara, NATO Secretary-General Jens Stoltenberg said the 30-country military alliance is “deeply concerned by the escalation of hostilities,” and urged Turkey to help end the fighting. A woman, salvages belongings from a house damaged by shelling by Armenian forces, in a residential area of the city of Ganja, Azerbaijan’s second-largest city, Monday, Oct. 5, 2020. The fighting between Armenian and Azerbaijani forces over the separatist territory of Nagorno-Karabakh resumed Monday, with both sides accusing each other of launching attacks. The region lies in Azerbaijan but has been under the control of ethnic Armenian forces backed by Armenia since the end of a separatist war in 1994. (Unal Cam/DHA via AP)

“I expect Turkey to use its considerable influence to calm tensions,” Stoltenberg told reporters after talks with Turkish Foreign Minister Mevlut Cavusoglu, who reiterated calls for Armenia to withdraw from the region.

“Everyone, and especially NATO, must make a call for Armenia to withdraw from these territories, in line with international laws, U.N. Security Council resolutions and Azerbaijan’s territorial and border integrity,” Cavusoglu said.

The Foreign Ministry of Iran, which has nearly 760 kilometers (470 miles) of border with Azerbaijan and a short border with Armenia, said it is working on a peace plan.

Ministry spokesman Saeed Khatibzadeh did not elaborate but said Iran is talking to all related parties.

“Iran has prepared a plan with a specific framework containing details after consultations with both sides of the dispute, Azerbaijan and Armenia, as well as regional states and neighbors, and will pursue this plan,” he said.

Khatibzadeh also warned both sides against expanding the hostilities into Iranian territory.

Since the beginning of the conflict, stray mortar shells have injured a child and damaged some buildings in rural areas in northern Iran, near the border with Azerbaijan.