A Sacramento resident discovered something very unique hiding in plain sight when she and her family took a hike in the Truckee area Sunday, September 27th.

“My family and I hike quite a bit in the Truckee area,” says Jessica Pearson to GV Wire℠ by Zoom.

Pearson was just finishing up a hike with her husband, 5 year old daughter and 2 year old son in the Sagehen Creek area that feeds into the Stampede Reservoir when she noticed something out of the corner of her eye. 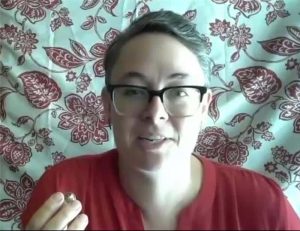 “I thought it was just a kids toy or something and then I thought that’s something I should pick up and try to reunite with its owner.”–Jessica Pearson, found ring

Pearson says it’s a ladies ring that can fit on her pinkie finger. The words Coalinga College wrap around a red stone right in the middle of the ring. “There are some initials in there. Depending on which way you look at the ring, the initials read a little differently,” explains Pearson. “But it looks like the name starts with an ‘M’ for sure.”

She says because it’s a piece of college jewelry, there are a lot of unique identifying features on it that perhaps only the owner would know.

She has yet to share the inscription on the inner band so she can know the owner once they come forward.

Hunt for the Owner

“I fancy myself an internet researcher.” She’s going on her own hunch the name on the ring is likely the female’s maiden name which makes the search that much more difficult.

“I figured there’s got to be somewhere I can get a lead on here.”

She searched Facebook to see if there was a Coalinga College but had little success.

She contacted West Hills College and received an email back. “I sent some identifying information, but nothing yet,” said Pearson.

Pearson believes the ring was either recently dropped, or someone else found it and propped it on a ledge hoping the owner would see it when they returned from a hike.

“I found that Facebook also has an entire web group dedicated to reuniting lost class rings with their owners,” says Pearson with excitement. “I posted it in there.”

The Facebook group is called ‘Class Rings Lost and Found‘ and has over 12,000 members.

A post pinned to the top of the page describes the process. “When posting lost or found rings make sure (you list the) School and year. If you have a picture of what it looked like great. You can do searches that way and High School or state.”

“I finally took to Twitter and did get quite a bit of interest there,” said Pearson. She says she had a few people reach out to her to say they’d shared it to their social media accounts.

She says if you know who the rings belongs to, or if you are the owner, please reach out to her on Twitter where she’s very active and continuing the search. Her Twitter account is @Jessica_Pearson

Anyone know a lady who graduated from Coalinga College in 1966? Found a ring today on a hike near Truckee. pic.twitter.com/OhS7NUhPLA