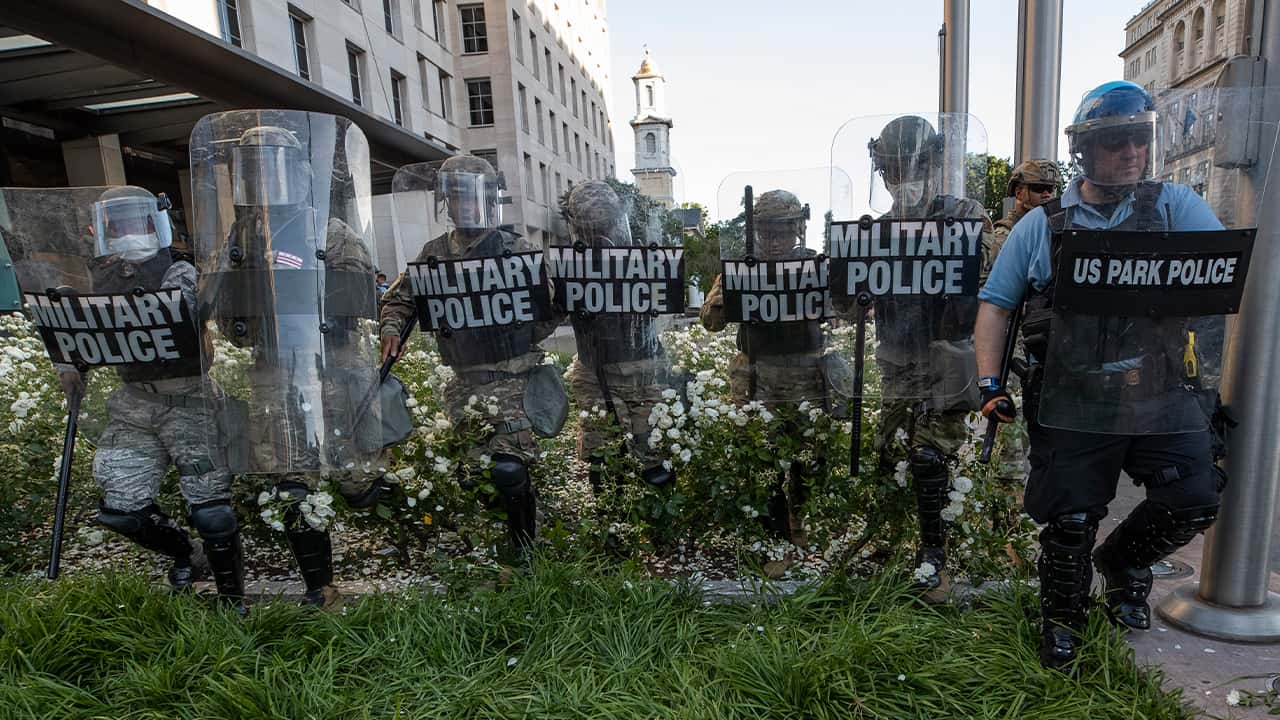 WASHINGTON — The National Guard has designated military police units in two states to serve as rapid reaction forces so they can respond quickly to any potential civil unrest around the country, following violent protests that rocked the nation’s capital and several states this summer.

Military leaders don’t explicitly tie the changes to concerns about possible election-related violence, but the nation is bracing for unrest surrounding the tumultuous presidential campaign, particularly if voting results are not known for days or weeks because of the increase in mail-in ballots.

According to the Guard, about 600 troops — 300 in both Alabama and Arizona — will be ready to deploy within 24 hours if requested by a governor in another state. And Guard leaders have also bought more than $200,000 in new protective equipment, and have increased troop training on proper procedures in dealing with protests.

The moves come as Defense Department and National Guard leaders work to address shortfalls that were identified in the military response to the June protests triggered by the death of George Floyd in Minneapolis. Military reviews of the response to the protests found problems with coordination between various state and federal government and law enforcement agencies — which at times slowed down troop movements.

“Coordination and communication were the probably the things that we’ll look back on and see very challenging,” Army Secretary Ryan McCarthy said in an interview with The Associated Press. He said that as the protests escalated in D.C., and the call for help went out to governors around the country, 11 states said they were willing to provide support.

Governors Can Use National Guard Troops for a Variety of Things

Governors can use National Guard troops for a variety of things, ranging from natural disasters such as hurricanes and wildfires, to assisting with border security and civil unrest. If a governor needs additional help, they can request troops from other state governors through a compact agreement system that details how the forces will be used and what they can and cannot do.

Lt. Gen. Mark Sasseville, vice chief of the National Guard Bureau, said the Guard employs a graduated approach, with states using their own troops first, and then, if more help is needed, they request forces from other states within their region. If more support is needed, then governors reach out to states further away.

“That makes sense because typically the states have good relations with the neighboring states,” said Sasseville in an interview with The Associated Press. “Speed becomes an element of this discussion.”

The problem, however, is that some states couldn’t free up troops to send to others because they also were dealing with protests or other emergencies. The Guard’s decision to formally designate troops in Alabama and Arizona as quick reaction forces will help because those units have aircraft that will allow them to rapidly deploy to another state within 24 hours of a governor’s request.

During the June Protests, Governors Used Their Own Guard Troops and, in Some Cases Sought and Received Forces From Other States

“A big thing that we’ve done differently is being able to move faster,” said Sasseville, adding that the Guard also had to buy equipment to replace protective gear for some units.

Military police from the Arizona National Guard were mobilized at least twice this year in support of law enforcement, including to Wisconsin and in response to protests in Phoenix in the wake of Floyd’s death.

During the June protests, governors used their own Guard troops and, in some cases sought and received forces from other states. At the peak, in early June, there were more than 43,000 Guard forces deployed across 34 states and the District of Colombia to help with civil unrest. That number has now plunged to about 3,200 across 10 states.

In extreme cases, the president can invoke the Insurrection Act and use active duty troops on domestic soil to quell riots or assist law enforcement. President Donald Trump pushed for that to happen, but senior defense and military leaders opposed it.

During the June protests, Defense Secretary Mark Esper drew the ire of the president when he told reporters that the Insurrection Act should be invoked in the United States “only in the most urgent and dire of situations.” He added, “We are not in one of those situations now.”