Jingle-Jangle and Ho-Ho-Ho. It's Time for Holiday Lights 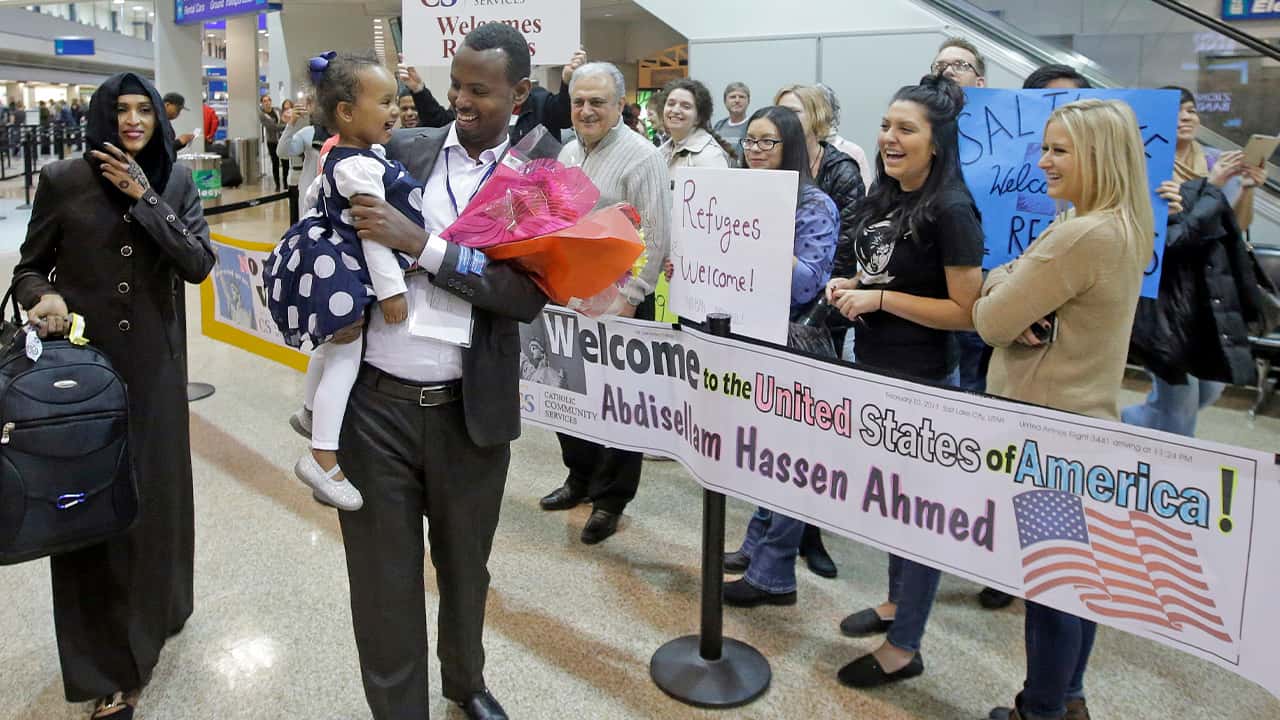 SAN DIEGO — Refugee advocates, including faith-based groups that President Donald Trump is courting in his re-election bid, called on Congress Thursday to halt his administration’s plans to slash the limit on refugees allowed into the U.S. to a record low, saying it goes against America’s values.

The administration’s plan was released as Trump vilified refugees as an unwanted burden for the country at a campaign rally in Duluth, Minnesota. He assailed his challenger, former Vice President Joe Biden, who has vowed to raise the ceiling on refugee admissions to 125,000 if elected.

In a notice sent to Congress late Wednesday, just 34 minutes before a statutory deadline to do so, the government unveiled its proposal to allow 15,000 refugees into the country in the fiscal year that started Thursday.

The number is 3,000 fewer than the historically low ceiling of 18,000 that Trump set for the fiscal year that ended Wednesday.

Scott Arbeiter, president of World Relief, a global Christian aid agency, said Trump has reneged on his promise to protect persecuted Christians in the world.

“Instead, we’ve seen the resettlement of refugees from countries known for persecution drop about 90% in some cases over the last four years,” Arbeiter said in a statement. “This is unconscionable.”

The administration’s plan was released as Trump vilified refugees as an unwanted burden for the country at a campaign rally in Duluth, Minnesota. He assailed his challenger, former Vice President Joe Biden, who has vowed to raise the ceiling on refugee admissions to 125,000 if elected.

“Biden will turn Minnesota into a refugee camp, and he said that — overwhelming public resources, overcrowding schools and inundating hospitals. You know that. It’s already there. It’s a disgrace what they’ve done to your state,” Trump told supporters.

He then blasted Democratic Rep. Ilhan Omar, who arrived to the United States as a Somali refugee and now represents Minneapolis in Congress, saying: “How the hell did Minnesota elect her? What the hell is wrong with you people, right?”

The Council on American-Islamic Relations, the nation’s largest Muslim civil rights organization, denounced the chipping away of the refugee program as part of “the ongoing Trump administration effort to maintain systemic anti-Black racism and white supremacy.”

Since taking office, Trump has cut the number of refugees allowed into the country by more than 80%, reflecting his broader efforts to drastically reduce legal and illegal immigration.

The plans to further close the door on refugees angered faith-based organizations as the president seeks to energize Christian social conservatives in key states to help him win a second term.

Rev. John L. McCullough, head of the Church World Service, which helps resettle refugees in the United States, described the slashing of refugee admissions as immoral and urged Congress to step in, though the president ultimately makes the decision on refugees allowed in under the 1980 Refugee Act. Congress can recommend changes or seek to influence the decision through budgeting, but is largely powerless to alter the determination.

“The proposed refugee resettlement number of 15,000, a more than 80% cut over historic norms, is unacceptable. Our values as a nation and as people of faith demand that we take action when people’s lives are in danger,” McCullough said in a statement.

He added: “But for the past three years, President Trump and his administration have strayed so far from these basic principles in the name of their cruel, racist and partisan goals that the life-saving refugee resettlement program is a shadow of what it once was.”

The 18,000 cap was already the lowest in the history of the program, which had seen an average annual quota of about 95,000 annually. Then Trump froze refugee admissions in March amid the pandemic, citing a need to protect the U.S. job market suffering from the coronavirus-induced economic fallout.

The State Department said the president’s proposed 16% cut reflects the administration’s “continuing commitment to prioritize the safety and well-being of Americans, especially in light of the ongoing COVID-19 pandemic.”

The State Department said the president’s proposed 16% cut reflects the administration’s “continuing commitment to prioritize the safety and well-being of Americans, especially in light of the ongoing COVID-19 pandemic.”

Refugee advocates have said the Trump administration is dismantling a program that has long enjoyed bipartisan support and has been considered a model for protecting the world’s most vulnerable people.

“The number of refugees that the United States welcomes each year is a measure of who we are and where we stand in the world in terms of our commitment to human rights,” Ryan Mace, a senior policy advisor at Amnesty International USA, said in a statement.

Scores of resettlement offices have closed because of the drop in federal funding that is based on the number of refugees arriving in the U.S.

And the damage is reverberating beyond American borders as other countries close their doors to refugees as the number of people displaced by war, famine and persecution has swelled to 80 million worldwide.

“We’re talking about tens of millions of desperate families with no place to go and having no hope for protection in the near term,” said Krish Vignarajah, president of the Lutheran Immigration and Refugee Service, a federally funded agency charged with resettling refugees in the U.S.

Democrats Press Ahead on Partisan COVID Bill as Talks Drag