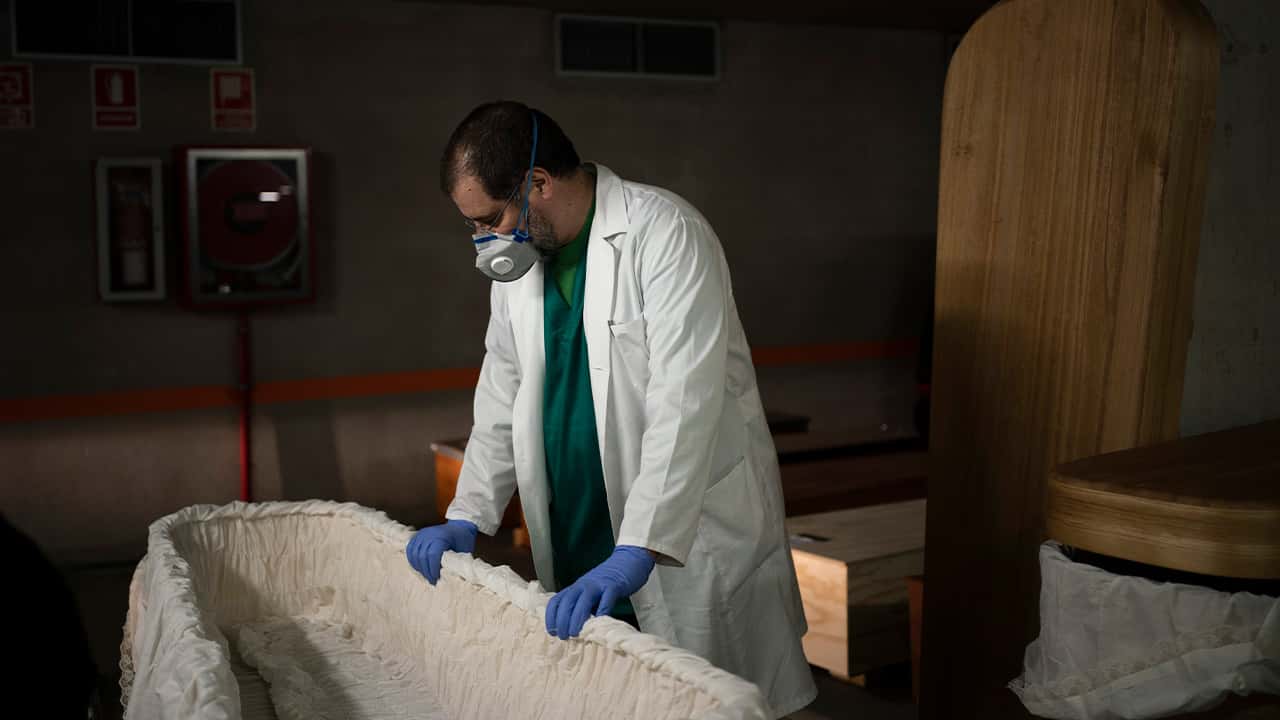 NEW DELHI — Joginder Chaudhary was his parents’ greatest pride, raised with the little they earned farming a half-acre plot in central India to become the first doctor from their village.

For the coronavirus, though, he was just one more in a million.

After the virus killed the 27-year-old Chaudhary in late July, his mother wept inconsolably. With her son gone, Premlata Chaudhary said, how could she go on living? Three weeks later, on Aug. 18, the virus took her life, too — yet another number in an unrelenting march toward a woeful milestone.

Now, 8 1/2 months after an infection doctors had never seen before claimed its first victims in China, the pandemic’s confirmed death toll has eclipsed 1 million, according to a count by Johns Hopkins University.

That is partly due to the virus’s quickening spread through India, where reported deaths have topped 96,000 and cases are increasing at the fastest rate in the world.

The United States, where the virus has killed about 205,000 people, accounts for 1 out of 5 deaths worldwide, far more than any other country despite its wealth and medical resources.

“It’s not just a number. It’s human beings. It’s people we love,” said Dr. Howard Markel, a professor of medical history at the University of Michigan who has advised government officials on containing pandemics. On a Thursday morning in February, Markel’s mother, 84 and infirm, was stricken by an illness later diagnosed as COVID-19. She died before midnight.

“It’s our brothers, our sisters. It’s people we know,” Markel said. “And if you don’t have that human factor right in your face, it’s very easy to make it abstract.”

Even at 1 million — greater than the population of Jerusalem or Austin, Texas, more than four times the number killed in the 2004 earthquake and tsunami in the Indian Ocean — the toll is almost certainly a vast undercount. In this October 2019 photo provided by Bharat Sangwan, Joginder Chaudhary, left, and his friend and colleague Sangwan volunteer at a medical camp for women. After the virus killed the 27-year-old Chaudhary in late July 2020, his mother wept inconsolably. With her son gone, Premlata Chaudhary said, how could she go on living? Three weeks later, on Aug. 18, the virus took her life, too — yet another number in an unrelenting march toward a woeful milestone. (Courtesy of Bharat Sangwan via AP)

Nearly 5,000 Deaths Are Reported Each Day on Average

Many deaths were probably missed because of insufficient testing and inconsistent reporting, and some suspect concealment by countries like Russia and Brazil.

And the number continues to mount. Nearly 5,000 deaths are reported each day on average. Parts of Europe are getting hit by new outbreaks and experts fear a second wave may await the U.S.

“I can understand why … numbers are losing their power to shock, but I still think it’s really important that we understand how big these numbers really are,” said Mark Honigsbaum, the London-based author of “The Pandemic Century: One Hundred Years of Panic, Hysteria and Hubris.”

Few people can testify to those numbers like the Rev. Mario Carminati, a priest in the northern Italian province of Bergamo, which was hit by one of Europe’s first major outbreaks last spring. When the virus overwhelmed local cemeteries, Carminati opened his church to the dead, lining up 80 coffins in the center aisle. After an army convoy carted them to a crematory, another 80 arrived. Then 80 more.

“It was something completely unpredictable that arrived like a bolt of lightning in a clear sky … and struck our reality,” he said.

Eventually the crisis receded and the world’s attention moved on. But the pandemic’s grasp endures. In August, Carminati buried his nephew, 34-year-old Christian Persico.

“This thing should make us all reflect. The problem is that we think we’re all immortal,” Carminati said.

The virus first appeared late last year in patients hospitalized in the Chinese city of Wuhan. The first death was reported there on Jan. 11. By the time authorities locked down the city nearly two weeks later, millions of travelers had come and gone. China’s government has come in for criticism that it did not do enough to alert other countries to the threat. Priest Mario Carminati touches a picture of his nephew Christian Persico, who died from symptoms of coronavirus, at a cemetery in Casnigo, near Bergamo, Italy, Sunday, Sept. 27, 2020. “This thing should make us all reflect. The problem is that we think we’re all immortal,” the priest said. (AP Photo/Antonio Calanni)

Brazil Has Recorded the Second Most Deaths After the U.S.

Government leaders in countries such as Germany, South Korea and New Zealand worked effectively to contain it. Others, like U.S. President Donald Trump and Brazil’s Jair Bolsonaro, dismissed the severity of the threat and the guidance of scientists, even as hospitals filled with gravely ill patients.

Oscar Ortiz, an oil platform worker for Mexico’s state-owned Petroleos Mexicanos, said he felt helpless while ill and quarantined this spring, as 14 of his coworkers died from the virus, three in a single week.

“It’s very painful to see this and not be able to do anything,” said Ortiz, whose company has reported more than 300 deaths in its ranks.

The virus has forced trade-offs between safety and economic well-being. The choices made have left millions of people vulnerable, especially the poor, minorities and the elderly.

India, whose government relaxed tight restrictions in recent months to jump-start an economy where many subsist on earnings from day labor, is the latest example.

“When the pandemic actually started to get under control to some extent, the lockdown was eased and then completely lifted,” said K. Srinath Reddy, president of the Public Health Foundation of India. “The virus had a free passage and could spread much more easily.”

With so many of the deaths beyond view in hospital wards and clustered on society’s margins, the milestone recalls the grim pronouncement often attributed to Soviet dictator Josef Stalin: One death is a tragedy, millions of deaths are a statistic.

The pandemic’s toll of 1 million dead in such a limited time rivals some of the gravest threats to public health, past and present.

It exceeds annual deaths from AIDS, which last year killed about 690,000 people worldwide. The virus’s toll is approaching the 1.5 million global deaths each year from tuberculosis, which regularly kills more people than any other infectious disease.

But “COVID’s grip on humanity is incomparably greater than the grip of other causes of death,” said Lawrence Gostin, a professor of global health law at Georgetown University. He noted the unemployment, poverty and despair caused by the pandemic, and deaths from myriad other illnesses that have gone untreated.

To put the death toll, alone, in perspective, look to Brazil.

Nearly a decade ago, more than 900 Brazilians were killed in flooding that was widely described as the country’s worst-ever single day of natural disaster. From late May to late August, the coronavirus killed more Brazilians than that, on average, day after day.

The victims included Caravaldina Oliveira da Costa, who worked for years as a maid in the beach resort of Armacao dos Buzios. She also stood up for her neighbors in Rasa, a poor community filled with the descendants of escaped slaves, becoming their voice in a fight for land rights.

“She brought something to Rasa that no politician would bring: self-confidence,” said Rejane Oliveira, her niece and disciple.

When the elder Oliveira died in June at 79, Buzios’ mayor decreed three days of mourning. But city hall ruled out holding a ceremony. Because of the virus, officials said, it wasn’t safe to gather.

For all its lethality, the virus has claimed far fewer lives than the so-called Spanish flu, which killed an estimated 40 million to 50 million worldwide in two years, just over a century ago. FILE – In this Aug. 5, 2020, file photo, recently filled graves are seen in the Olifantsveil Cemetery outside Johannesburg, South Africa. The worldwide death toll from the coronavirus eclipsed 1 million, nine months into a crisis that has devastated the global economy, tested world leaders’ resolve, pitted science against politics and forced multitudes to change the way they live, learn and work. (AP Photo/Jerome Delay, File)

Cases Have Recently Surged in Countries Like Britain, Spain, Russia and Israel

That pandemic came before scientists had microscopes powerful enough to identify the enemy or antibiotics that could treat the bacterial pneumonia that killed most of the victims. In the U.S., the Spanish flu killed about 675,000. But most of those deaths did not come until a second wave hit over the winter of 1918-19.

Up to now, the disease has left only a faint footprint on Africa, well shy of early modeling that predicted thousands more deaths.

But cases have recently surged in countries like Britain, Spain, Russia and Israel. In the United States, the return of students to college campuses has sparked new outbreaks. With approval and distribution of a vaccine still probably months away and winter approaching in the Northern Hemisphere, the toll will continue to climb.

“We’re only at the beginning of this. We’re going to see many more weeks ahead of this pandemic than we’ve had behind us,” Gostin said.

Already, though, far too many grieve.

“This pandemic has ruined my family,” said Rajendra Chaudhary, who lost his son, the young Indian doctor, and then his wife. “All our aspirations, our dreams, everything is finished.”