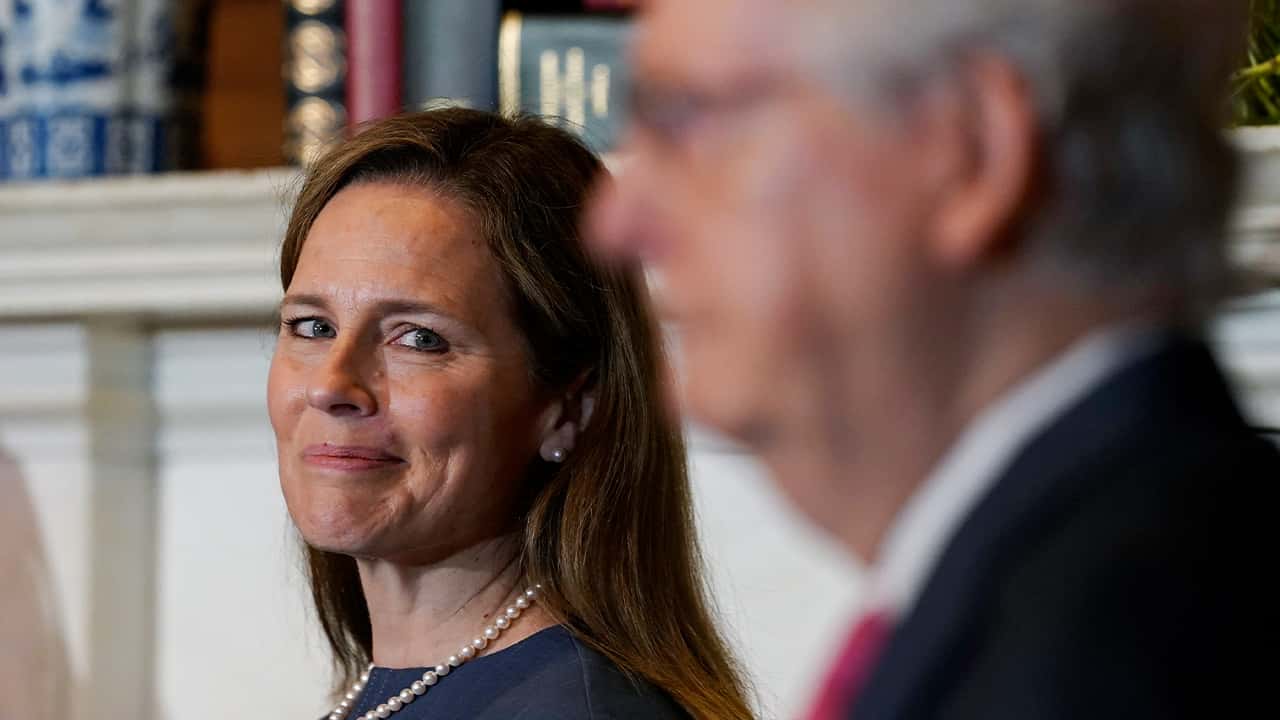 WASHINGTON — President Donald Trump’s nominee for the Supreme Court, Amy Coney Barrett, is on Capitol Hill on Tuesday for a day of meetings with Senate Majority Leader Mitch McConnell and other pivotal Republican senators in preparation for her fast-track confirmation before the Nov. 3 election.

Joined by Vice President Mike Pence, McConnell said he was glad to welcome Barrett and “get the process started” on her confirmation. But the Republican leader declined to answer questions about whether the judge should recuse herself if legal challenges to the election between Trump and Democrat Joe Biden land at the high court.

Joined by Vice President Mike Pence, McConnell said he was glad to welcome Barrett and “get the process started” on her confirmation. But the Republican leader declined to answer questions about whether the judge should recuse herself if legal challenges to the election between Trump and Democrat Joe Biden land at the high court.

“We truly do believe Judge Barrett represents the best of America,” Pence said in brief remarks in the Senate’s Mansfield Room.

Democrats are confronting the limits of their power as they fight against the nomination and some have said they won’t meet with Barrett, who is expected to be confirmed for the seat held by the late Justice Ruth Bader Ginsburg by the end of October.

With Republicans holding a 53-47 Senate majority, and just two GOP senators opposing a quick vote, Barrett appears to have enough support for confirmation.

Senate Democratic leader Chuck Schumer acknowledged Tuesday it will be an “uphill fight” to stop Trump’s nominee. But he said Americans are on Democrats’ side in preferring to wait until after the election so the winner can choose the next justice. He is among those refusing to meet with Barrett, calling the process “illegitimate,” and said her conservative views on health care, abortion and other issues are “far outside” the mainstream.

Barrett made no public remarks at the start of what is expected to be days of meet-and-greet sessions with senators, a traditional part of the confirmation process. She also was to meet Tuesday with Sen. Lindsey Graham, R-S.C, the chairman of the Judiciary Committee, and other senators on the panel. Hearings at the committee are set to begin Oct. 12.

No justice has ever been confirmed to the Supreme Court so close to a presidential election. According to a national poll by The New York Times and Siena College that was released Sunday, a clear majority — 56% — of voters believes the winner of the Nov. 3 presidential election should fill Ginsburg’s seat, versus 41% who said Trump should as the current president.

Unable to block Trump’s pick on their own, Democrats are aimed at avoiding mistakes that could hurt their party’s candidates in November. They are arguing to voters that Barrett’s nomination threatens the protections of the Affordable Care Act — a focus that Biden has embraced and many Democrats see as a winning message. The court will hear a case challenging the constitutionality of President Barack Obama’s health care law just after the election, adding to the urgency of the issue.

But there will also be ample opportunities for Democrats to move off-message as partisans on both sides infuse the nomination battle with cultural, gender and religious politics.

Some in the left wing of the Democratic Party are pushing for senators to boycott the hearings or commit to adding more justices to the court if Biden wins the presidential election. That has fueled concerns in the party about placing too much emphasis on procedural tactics that only delay votes by hours or days — even as precious time ticks away in the few remaining weeks before the Nov. 3 election.

Religion, in particular, could be a minefield.

Democrats worry that Barrett has tied her Catholicism too closely to some of her statements and decisions, and California Sen. Dianne Feinstein, the top Democrat on the Senate Judiciary Committee, still faces criticism for her comments during Barrett’s 2017 confirmation hearing. Feinstein had joined Republicans on the panel in asking Barrett about her faith, but then went further by telling the then-professor that “when you read your speeches, the conclusion one draws is that the dogma lives loudly within you.”

Republicans now use those comments against Democrats.

“The Constitution prohibits a religious test from serving in office, but I don’t expect that to stop the Democrats,” Texas Sen. Ted Cruz, a member of the committee, said in an interview with The Associated Press on Monday. He described Feinstein’s words as “snidely put” and said Democrats had suggested Barrett’s views render her ineligible for office.

Asked about Feinstein’s comments, Democratic Sen. Chris Coons of Delaware, another committee member, said “religious faith should not be at issue here.” He then pivoted to health care.

“It is appropriate for us to question her statements, her opinions, her actions as a professor and judge, but not to go into questions of doctrine or faith personally,” Coons said on “Face the Nation” on CBS. “That’s where I’ll be focusing my questions: on the Affordable Care Act and on what she has said publicly about her views on its constitutionality.”

“It is appropriate for us to question her statements, her opinions, her actions as a professor and judge, but not to go into questions of doctrine or faith personally. That’s where I’ll be focusing my questions: on the Affordable Care Act and on what she has said publicly about her views on its constitutionality.” — Sen. Chris Coons

Democrats see health care as the perfect counter to Republican hopes that Barrett’s confirmation will bolster Trump’s reelection. More Americans now favor the ACA than have opposed it over the last few years, according to polls, and Democrats believe the coronavirus pandemic will only solidify that support. They intend to model their strategy on their successful 2017 fight against Trump and congressional Republicans who tried and failed to repeal the legislation.

Schumer, Biden and House Speaker Nancy Pelosi have agreed that health care is a strong focus, according to two aides with knowledge of the private discussions who spoke on the condition of anonymity.

One likely prominent messenger on the issue is the Democratic vice presidential nominee, California Sen. Kamala Harris, who sits on the judiciary panel and is expected to participate in the confirmation hearings.

On Monday, Harris told voters in North Carolina that without the health care law, birth control coverage could be eliminated and pregnancy could be considered a preexisting condition.

Tax Protester in 2007 Armed Standoff to Remain in Prison