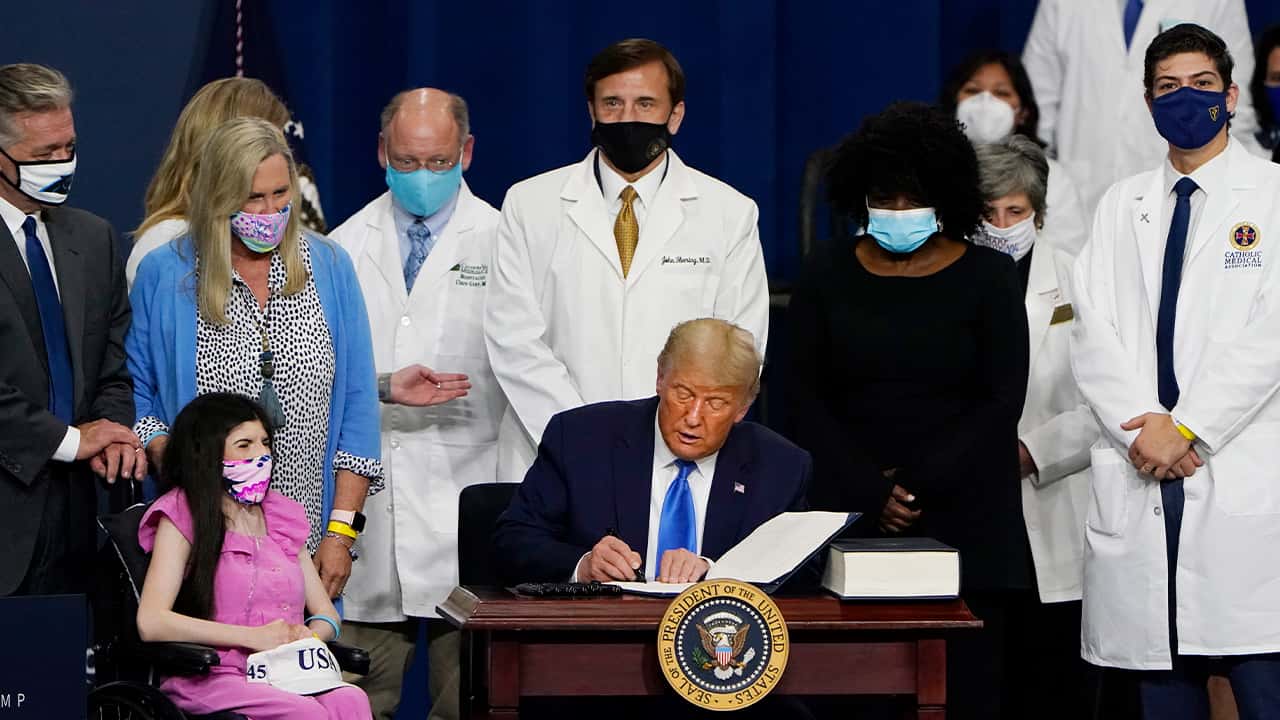 WASHINGTON — If you’re on Medicare, don’t run to the mailbox looking for a $200 prescription drug card courtesy of President Donald Trump.

Government officials said Friday that key details of Trump’s election-year giveaway still have to be fleshed out, including the exact timing and how Medicare’s cost would be covered — a sum that could approach $7 billion.

It’s also unclear which Medicare enrollees will get the promised cards. Trump said 33 million beneficiaries would receive cards in the mail, but more than 60 million people are covered by the federal health insurance program for seniors.

Trade groups representing the two industries most affected by the plan — drug companies and insurers — said they have received no specifics from the Trump administration. Public policy experts called it an attention-grabbing move — weeks before the presidential election — that won’t change much in the end.

“Providing a coupon does absolutely nothing to address the underlying problem of high and rising drug prices,” said Tricia Neuman, a Medicare expert with the nonpartisan Kaiser Family Foundation. “The administration has had nearly four years to work with Congress or go through the regulatory process to adopt proposals that could have a real and sustained impact on drug prices.”

For example, a bipartisan Senate bil l would have capped out-of-pocket costs for Medicare recipients with high drug bills, while also limiting price increases by requiring rebates to the program. But it stalled this year even though Trump lined up behind it. The compromise faced opposition from the drug industry and from Republican senators who saw it as a path to government price controls. The emergence of more ambitious legislation from House Speaker Nancy Pelosi diminished Democrats’ appetite for a deal.

Meanwhile, the administration is still working on regulatory actions to try to peg what Medicare pays for medications to lower prices abroad. That’s what Trump often refers to as “favored nations,” an idea that could lead to big savings but is likely to face legal challenges from the pharmaceutical industry.

Medicare enrollees can get prescription drug coverage by purchasing a “Part D” drug plan or by joining a Medicare Advantage plan. Announcing the savings cards Thursday at a speech in Charlotte, N.C., Trump called it a “historic provision” to benefit seniors. “Nobody has seen this before,” he said with typical salesmanship. “These cards are incredible.”

Using Trump’s figure of 33 million people getting the $200 cards, the cost would work out to $6.6 billion, not including administrative expenses.

The White House says the prescription cards are definitely coming. They will be mailed in coming weeks, although officials are providing no date.

The cards would provide a savings off copays owed by seniors for their medications, according to the White House. Medicare would cover the cost under its authority to launch demonstration programs.

Then, in another step, Medicare’s own cost would be offset. That would be done with expected savings from a yet-to-be finalized regulation that pegs what the program pays for drugs to lower overseas prices __ and capitalizes on Trump’s “favored nations” idea.

If the gambit works, savings squeezed from the pharmaceutical industry would eventually end up covering the cost of the copay cards. But there are many unanswered questions, including legal and budgetary issues.

“These are wishful savings that come from a policy that has not been finalized,” said the Kaiser Foundation’s Neuman.

Seniors may not be all that impressed, said Frederic Riccardi, president of the Medicare Rights Center, an advocacy group based in New York.

For some, “$200 doesn’t even cover the coinsurance for one drug,” he added.

A Kaiser Foundation study in 2019 found that Medicare recipients taking pricey “specialty drugs” for serious conditions including cancer, hepatitis C, multiple sclerosis and rheumatoid arthritis, could expect to pay from $2,622 to $16,551 a year out of their own pocket, depending on the medication and the disease. Those figures represent the median, or midpoint cost for people with Medicare’s Part D coverage.

With all the unfinished work, and given that government tends to move slowly, officials aren’t saying whether the $200 cards will go out before Election Day — or if Trump’s name will be on them.

Oregon Democratic Sen. Ron Wyden, coauthor of the bipartisan drug cost bill that stalled even with the president’s endorsement, called the whole exercise a gimmick.

“This president only cares about drug costs during campaign season,” Wyden said in a statement. “Drug companies will be paying as much for this gimmick as Mexico is paying for The Wall,” referring to Trump’s wall along the southern U.S. border.

Desk Shortage Forces People to Get Creative About Workspaces