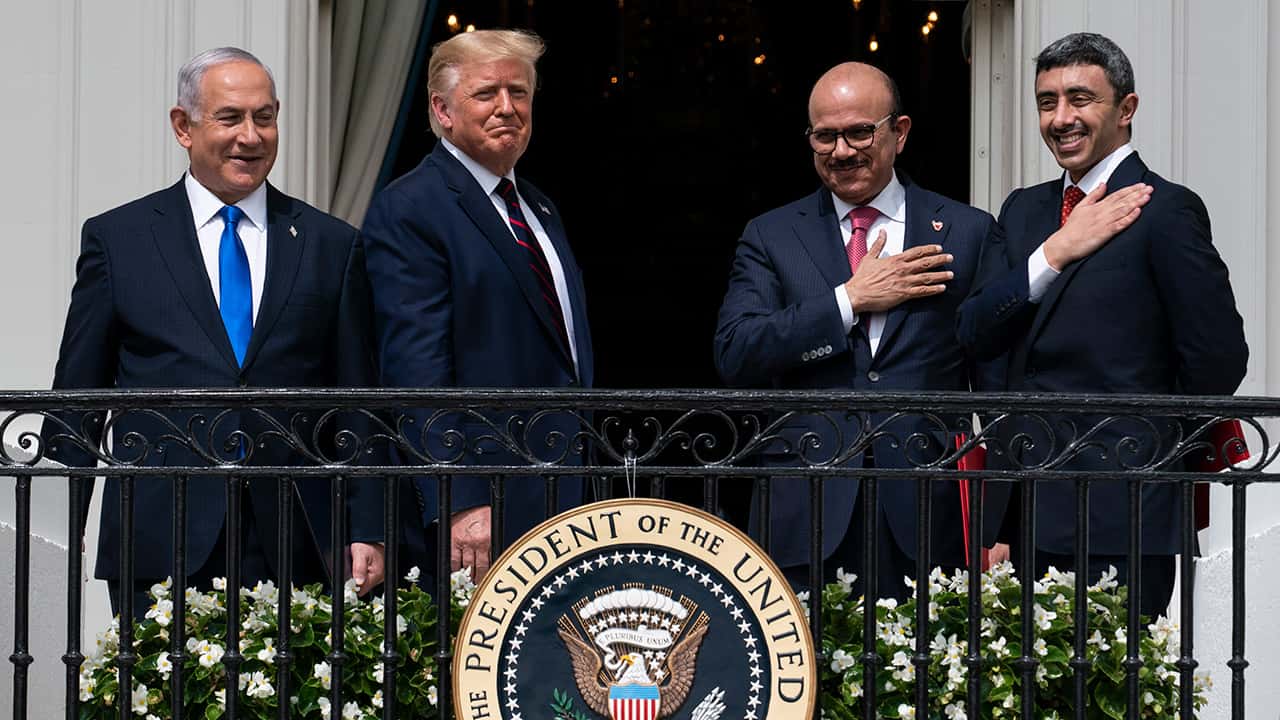 Jewish American voters have leaned Democratic for decades, but Republicans are hoping the recent steps toward normalized relations between Gulf states and Israel — which Trump vigorously touted earlier this month — bolster his appeal to Jewish voters.

With battleground states like Pennsylvania, Florida and Michigan collectively decided in 2016 by fewer than 200,000 votes, any loss of the Jewish support by Democratic nominee Joe Biden could be pivotal.

“Democrats like to say they have a majority of the Jewish vote. They do — but that’s not what this game is about.” — Republican Jewish Coalition executive director Matt Brooks

“Democrats like to say they have a majority of the Jewish vote,” said Republican Jewish Coalition executive director Matt Brooks, whose group is spending $10 million to boost Trump and other GOP candidates in electoral battlegrounds ahead of November. “They do — but that’s not what this game is about.”

Brooks’ group is working toward a goal of 300,000 voter contacts in swing states, focusing the bulk of its spending on Trump while also aiding some GOP congressional hopefuls. Last week’s signing ceremony of the Israel-United Arab Emirates agreement, which Bahrain later joined, “proves that the president does have a vision” for working toward peace in the Middle East, Brooks said.

The Trump campaign is ramping up its own efforts as well, launching a new “Jewish Voices for Trump” initiative effort in September that centers on the president’s support for Israel. Co-chairs include Nevada casino mogul and conservative donor Sheldon Adelson as well as former Trump White House aide Boris Epshteyn.

“President Trump is a champion of the Jewish people and the greatest ally the State of Israel has ever had,” Epshteyn, who also advises Trump’s campaign, said in a statement.

But whether Trump can gain ground with Jewish voters on the strength of his foreign policy agenda remains an unanswered question. According to a Pew Research Center poll conducted last year, 42% of Jewish Americans said Trump’s policies favor the Israelis too much, while 47% said he strikes the right balance between Israelis and Palestinians. FILE – In this Thursday, Aug. 20, 2020 file photo, Democratic presidential candidate former Vice President Joe Biden and his wife, Jill Biden, and Democratic vice presidential candidate Sen. Kamala Harris, D-Calif., and her husband, Douglas Emhoff, stand together on stage on the fourth day of the Democratic National Convention outside of the Chase Center in Wilmington, Del. Jewish American voters have leaned Democratic for decades, but the GOP is still eyeing modest gains with the constituency in states where President Donald Trump could reap major benefits with even small improvements over his performance in 2016. (AP Photo/Carolyn Kaster)

And most Jewish voters broke for Democrats in the 2018 midterm elections. AP VoteCast found that 72% of Jews who voted nationwide backed Democratic House candidates, while 26% backed Republicans. Among those Jewish midterm voters in 2018, VoteCast shows that 74% disapproved of Trump and just 26% approved.

The majority of Jewish voters who view Trump unfavorably “are not going to put (that) out of their minds” because the president can trumpet new pacts between Gulf states and Israel, said Jeremy Ben-Ami, president of the liberal-leaning Jewish American advocacy group J Street.

J Street’s political committee has raised more than $2 million for Biden and hosted a virtual reception with the Democratic nominee in September. It’s not alone among progressive Jewish American groups that are bullish on Biden: Halie Soifer, executive director of the Jewish Democratic Council of America, predicted in an interview that Biden could make up for Trump’s 2016 margin of victory in Michigan and Pennsylvania “with the Jewish vote alone.”

“When it comes to Israel, there’s a tendency among Republicans, including the president himself, to treat Jewish voters as if we are, A, monolithic and, B, one-issue voters,” said Soifer, who led Jewish voter outreach for former President Barack Obama’s 2008 campaign in Florida. “He’s wrong on both counts.”

Indeed, Trump sparked criticism last year by telling reporters that Jewish Americans who vote Democratic are “disloyal” to both their faith and to Israel. The issue reemerged this month during an annual pre-Rosh Hashana call between Trump and Jewish leaders.

According to the Jewish Telegraphic Agency, Trump ended the call by telling the Jewish American leaders, “We really appreciate you. … We love your country also.”

The Washington Post also reported on Wednesday (Sept. 23) that after ending phone calls with Jewish lawmakers, Trump — according to unnamed current and former White House officials — allegedly has muttered that Jews “are only in it for themselves” and “stick together” in an ethnic allegiance.

The White House did not respond to a request for comment regarding the allegations, but a spokesperson told The Washington Post that “Donald Trump’s record as a private citizen and as president has been one of fighting for inclusion and advocating for the equal treatment of all.”

“We know that Donald Trump’s use of anti-Semitic tropes has emboldened all those who hate Jews. We must not numb ourselves to Trump’s dangerous rhetoric during our sacred time of reflection and holiness. This should serve as a wakeup call to the relatively few Jewish Americans who still insist on standing with and promoting the current occupant of the White House.” — Aaron Keyak, Biden’s Jewish engagement director

The Biden campaign has been quick to condemn Trump’s remarks and cast him as insensitive to Jews.

“We know that Donald Trump’s use of anti-Semitic tropes has emboldened all those who hate Jews,” Aaron Keyak, Biden’s Jewish engagement director, said in a statement addressing the Post’s reporting. “We must not numb ourselves to Trump’s dangerous rhetoric during our sacred time of reflection and holiness. This should serve as a wakeup call to the relatively few Jewish Americans who still insist on standing with and promoting the current occupant of the White House.”

In a separate interview, Keyak touted the robust outreach efforts by the Biden campaign to Jewish voters, such as staging regular phone banks and taking the unusual step of hiring dedicated Jewish vote directors in Florida and Pennsylvania.

“The Biden campaign and the DNC have made an unprecedented investment of resources and talent into turning out and persuading Jewish voters,” he said.

Biden’s team is working to target its efforts to be as local as possible. His campaign recently convened Jewish outreach events in Pennsylvania, Florida and Ohio with Douglas Emhoff, Kamala Harris’ husband, who is Jewish. It has also held an event for Democrats abroad in Israel with former Sen. Barbara Boxer and two former ambassadors to the nation.

“There’s no question that the Jewish vote can make a difference in Florida as well as states like Pennsylvania, Ohio and Michigan,” Keyak said.

The Trump campaign may be playing catch-up with Biden when it comes Jewish outreach, but Republicans are hoping the president’s record of support for Israel will speak louder to more moderate and conservative Jewish voters than his recent controversies. This includes Orthodox Jews, who comprise a minority of the Jewish American population but skew majority-Republican, according to a 2013 Pew study.

Nathan Diament, executive director of the Orthodox Union Advocacy Center, said this election is “about margins, and it’s about margins in key swing states.”

Diament, who’s been an appointed adviser on faith-based issues to both the Trump and Obama administrations, said that Orthodox Jews — while a minority of the Jewish American population — are the most swing-voter-like element of the faith’s broader voting bloc. His group has held virtual sessions with Biden’s Jewish outreach director as well as a Trump campaign representative and plans further programming this fall focused on specific swing states.

Views of Biden among Orthodox Jews tend to skew more positive than those of Hillary Clinton did in 2016, Diament said, but “on the other hand, Trump has a record to run on” when it comes to the specific issues that appeal to Jewish voters the president’s team wants to court.

He singled out Trump’s move of the U.S. Embassy in Israel to Jerusalem, as well as the Israel-UAE deal, as “motivating for segments of American Jews for whom Israel is a priority voting issue.”

Of course, Biden can also make the case for his own record on U.S.-Israel relations. The former vice president has steered clear of the most liberal proposals on curtailing Israeli expansionism that some of his Democratic primary rivals offered, and one of Biden’s campaign surrogates, Rep. Lois Frankel, D-Florida, said she feels “very good” about how Biden has approached the issue.

It’s “to the detriment of Israel that Donald Trump and some Republicans try to use Israel as a political football, to make it appear as if Democrats are not for the security of Israel,” Frankel said in an interview.

Related Topics:2020 ElectionIsraelJewishRepublicans
Up Next

Questions Arise Over Holdback of Fresno PD Use of Force Critique