Triple digit temperatures could return to the Valley next week, just days after the start of the fall season.

While Tuesday, Sept. 22 marked the autumnal equinox — and the official end of summer — Fresno will have to wait a bit longer for cooler weather to arrive.

Weather.com is predicting string of four days at or above 100 degrees starting Monday, peaking with highs of 101 on Tuesday and Thursday. 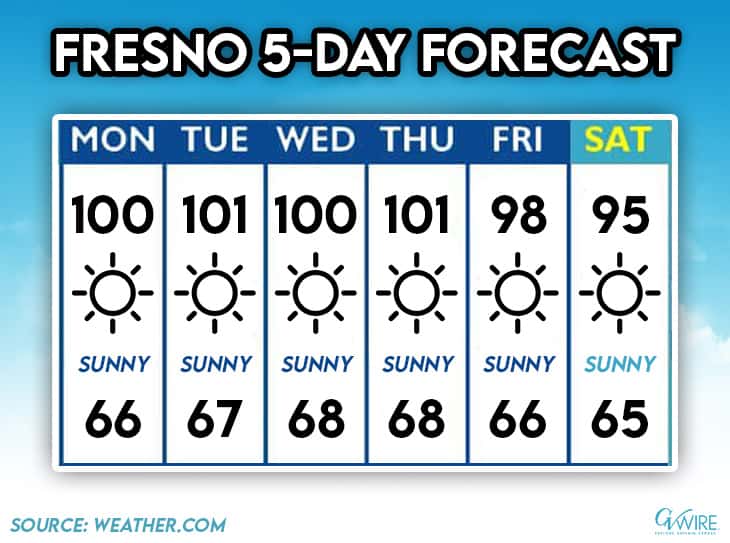 The National Weather Service in Hanford says a large upper ridge is developing over California and expanding across the western U.S.

“This will result in a warming trend across our area from Saturday through the middle of next week with temperatures rising to well above normal levels again by Monday,” the NWS forecast said.

The Valley has already seen more than its usual share of days in the triple digits this year, Hanford meteorologists said in a recent Twitter post.

Will next week’s high temperatures be enough to break any records? It’s a possibility — though Monday’s predicted high is a longshot to best the record of 104 for Sept. 28 that was set in 1887.

But temperatures are predicted to be closer to record levels Tuesday through Thursday. The highest temperature previously recorded on Sept. 29 (Tuesday) was 102 and is forecast to reach 101 while the record for Sept. 30 (Wednesday) is 101 and is predicted to hit 100.

That leaves Thursday, when the temperature is currently forecast to reach 101. If that prediction comes to pass, it would beat the record high of 100 degrees for that date set in 1987.