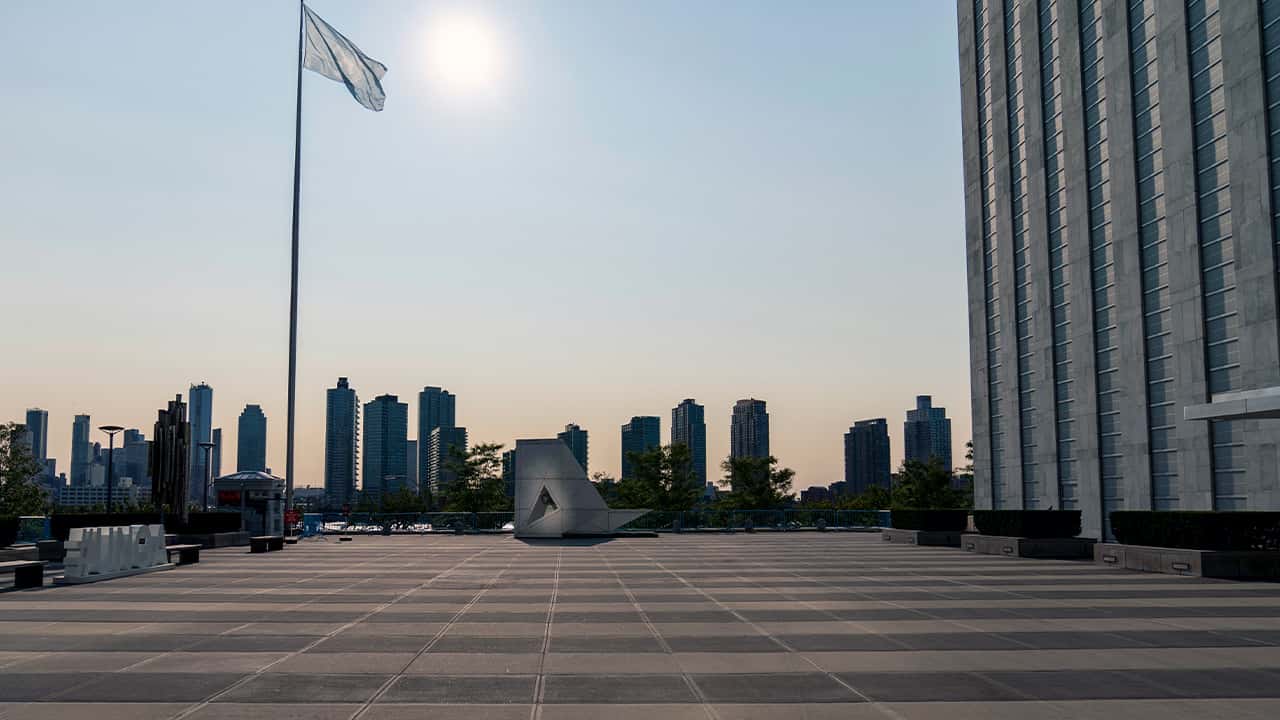 UNITED NATIONS — Born out of World War II’s devastation to prevent the scourge of conflict, the United Nations marked its 75th anniversary Monday with an appeal from Secretary-General Antonio Guterres to preserve the longest period in modern history without a military confrontation between the world’s most powerful nations.

The U.N. chief told the mainly virtual official commemoration that “it took two world wars, millions of deaths and the horrors of the Holocaust for world leaders to commit to international cooperation and the rule of law,” and that commitment produced results.

“A Third World War — which so many had feared — has been avoided,” Guterres said. “This is a major achievement of which member states can be proud — and which we must all strive to preserve.”

His appeal came at an inflection point in history, as the United Nations navigates a polarized world facing a pandemic, regional conflicts, a shrinking economy, growing inequality and escalating U.S.-China tensions.

U.S. President Donald Trump was on the speaker list for the commemoration, but he did not speak. In a snub to the United Nations, the United States was represented by its acting deputy U.N. ambassador, Cherith Norman Chalet.

“In many ways, the United Nations has proven to be a successful experiment,” she said. But for too long, she added, it has resisted “meaningful reform,” lacked transparency and been “too vulnerable to the agenda of autocratic regimes and dictatorships.” A journalist films United Nations security outside the main entrance to the U.N. headquarters, Monday, Sept. 21, 2020, . 2020 marks the 75th anniversary of the United Nations, the annual high-level meeting of world leaders around the U.N. General Assembly will be very different from years past because of the coronavirus pandemic. Leaders will not be traveling to the United Nations in New York for their addresses, which will be prerecorded. Most events related to the gathering will be held virtually. No access to world leaders on the U.N. grounds will be possible, therefore, and access to most anything will be extremely curtailed. (AP Photo/Mary Altaffer)

There Is Also Strong Support for the U.N.’s Power

In an AP interview in June, Guterres said the U.N.’s biggest failing was its inability to prevent medium and small conflicts.

And 25 years after world leaders meeting in Beijing adopted a 150-page platform to achieve equality for women, he said Monday that “gender inequality remains the greatest single challenge to human rights around the world.”

Appealing for the world’s nations and peoples to work together, Guterres said, “the COVID-19 pandemic has laid bare the world’s fragilities” which can only be addressed together.

While the U.N. has been criticized for spewing out billions of words and achieving scant results on its primary mission of ensuring global peace, it nonetheless remains the one place that its 193 member nations can meet to talk.

As frustrating as its lack of progress often is, especially when it comes to preventing and ending crises, there is also strong support for the U.N.’s power to bring not only nations but people of all ages from all walks of life, ethnicities and religions together to discuss critical issues like climate change.

The United Nations marked its actual 75th anniversary — the signing of the U.N. Charter in San Francisco on June 26, 1945 by delegates from about 50 countries — on that date this year at an event scaled down because of the coronavirus pandemic.

Monday’s mainly virtual official commemoration was not a celebration. It included some grim video footage of the crises and conflicts during the U.N.’s history, as well as high points and successes.

One highlight: the adoption of a declaration on the U.N.’s 75th anniversary, approved by diplomats from all U.N. member states in June after sometimes heated negotiations. It recalls the U.N.’s successes and failures over more than seven decades and vows to build a post-pandemic world that is more equal, works together, and protects the planet.

“The urgency for all countries to come together, to fulfill the promise of the nations united, has rarely been greater,” it says, while praising the United Nations as the only global organization that “gives hope to so many people for a better world and can deliver the future we want.”

Even at times of great tension, it says, the U.N. promoted decolonization, freedom, development, human rights and equality for women and men, “and worked to eradicate disease.” And it “helped mitigate dozens of conflicts, saved hundreds of thousands of lives through humanitarian action and provided millions of children with the education that every child deserves.”

As for disappointments, the declaration says the world “is plagued by growing inequality, poverty, hunger, armed conflicts, terrorism, insecurity, climate change and pandemics.” It says the poorest and least developed countries are falling behind, decolonization is not complete, and people are forced to make dangerous journeys in search of refuge.

“It’s very unfortunate that it’s going to be a pretty gloomy celebration for the U.N,” said Richard Gowan, U.N. director for the Crisis Group, a Brussels-based think tank.

A year ago, Guterres warned leaders attending the General Assembly’s high-level meeting of the looming risk of the world splitting in two, with the United States and China creating rival internets, currency, trade, financial rules “and their own zero-sum geopolitical and military strategies.”

Former Trump national security adviser John Bolton, a longtime U.N. critic who previously served as U.N. ambassador, said the United Nations did not meet expectations at the end of the Cold War in the early 1990s “that with Cold War gridlock removed, it would once again be effective.”

Bolton said President Donald Trump isn’t going to tackle the U.N. reforms that he would like to see if he wins a second term. “I think he doesn’t fully understand it, doesn’t care about it, like much of the world of foreign policy,” Bolton said.

If Democratic candidate Joe Biden wins, “they’ll want to do more through the U.N., but I don’t think they’ve thought it through either,” Bolton said. “So I think you’re at a period of uncertainty that’s going to last for some time.”