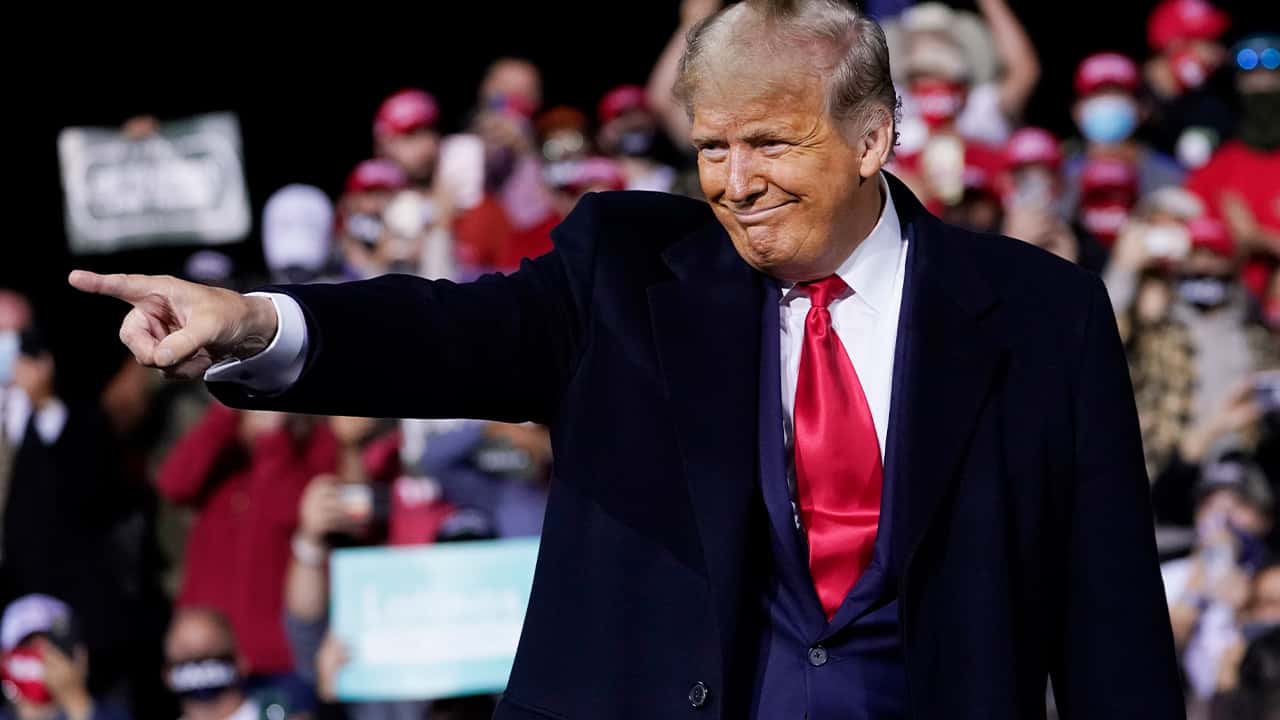 WASHINGTON — President Donald Trump said Monday he expects to announce his pick for the Supreme Court on Friday or Saturday, after funeral services for Ruth Bader Ginsburg and just days before the first presidential election debate.

Trump told “Fox & Friends” that he had a list of five finalists, “probably four,” and that he is pushing for a confirmation vote before Election Day. Democrats have howled in protest, pointing to the hypocrisy of Republicans for rushing through a pick so close to the election after refusing to do so for President Barack Obama in 2016.

The impending clash over the vacant seat — when to fill it and with whom — has scrambled the stretch run of a presidential race for a nation already reeling from the pandemic that has killed nearly 200,000 people, left millions unemployed and heightened partisan tensions and anger. Democratic nominee Joe Biden has urged a delay in a nomination, declaring that the next president should fill the seat.

Trump disparaged reports that Ginsburg had told her granddaughter it was her wish that a replacement justice not be confirmed until the inauguration of a new president. Trump said he thought his Democratic political foes were behind the report, including Rep. Adam Schiff, who led the House impeachment probe, House Speaker Nancy Pelosi, and Senate Democratic Leader Chuck Schumer.

“I don’t know that she said that, or was that written out by Adam Schiff and Schumer and Pelosi,” Trump said. “I would be more inclined to the second … But that sounds like a Schumer deal or maybe a Pelosi or Shifty Schiff,” a derisive nickname he has long used for Schiff. Trump frequently disparages Schiff, claiming without evidence that the California Democrat is behind a conspiracy against him. Schiff’s office said Monday it had no immediate comment.

The president and his fellow Republicans, including Senate Majority Leader Mitch McConnell who will control the timing of the confirmation hearings and vote, have pushed back against the 2016 comparison, noting that Trump could win again and saying that, unlike four years ago, the same party controlled both the White House and the Senate. Trump allowed that he would accept a vote in the lame duck period after Election Day but made clear his preference would be that it occur by Nov. 3.

Announcing a nominee on Friday or Saturday would leave less than 40 days for the Senate to hold a confirmation vote before the election. No nominee has won confirmation that quickly since Sandra Day O’Connor became the first woman to serve on the Supreme Court in 1981. O’Connor was confirmed 99-0 just over a month after she was nominated by President Ronald Reagan.

The president confirmed Monday that among the top contenders are Indiana’s Amy Coney Barrett and Florida’s Barbara Lagoa, both appellate court judges he appointed. Barrett has long been a favorite among conservative while Lagoa has been pushed by some aides who tout her electorate advantages of being Hispanic and hailing from the key battleground state of Florida.

Trump also indicated that Allison Jones Rushing, a 38-year-old appellate judge from North Carolina, is also on the short-list. He has promised to nominate a woman for the high court, adding that his preference is for someone younger who could hold sway on the nation’s jurisprudence for potentially four or five decades.

As the Senate returned to Washington on Monday, all eyes were on Republicans Mitt Romney of Utah and Chuck Grassley of Iowa for clues to whether Trump and McConnell will be able to confirm Ginsburg’s replacement anytime soon.

A day earlier, Biden had urged unnamed Republicans to join Sens. Lisa Murkowski of Alaska and Susan Collins of Maine in opposing a confirmation vote before the Nov. 3 election. It takes four GOP senators breaking ranks to keep Trump’s nominee off the court. There Is Another Potential Wrinkle

“Uphold your constitutional duty, your conscience,” said Biden, speaking in Philadelphia on Sunday. “Let the people speak. Cool the flames that have engulfed our country.”

Jamming the nomination through, Biden said, would amount to an “abuse of power.”

The sudden vacancy was poised to reshape the race, which to this point has been largely a referendum how Trump had managed the COVID-19 pandemic.

It seemed certain to electrify both sides: Democrats were breaking fundraising records while a packed Trump crowd in North Carolina Saturday loudly chanted “Fill that seat.” But it remained unclear if the high bench vacancy — which could impact everything from abortion rights to legal challenges to the 2020 election — would persuade disenchanted Republicans to return to Trump or fire up women or suburban voters to break for Biden.

Republicans hold a 53-47 edge in the Senate. If there were a 50-50 tie, it could be broken by Vice President Mike Pence.

There is another potential wrinkle: Because Arizona’s Senate race is a special election, that seat could be filled as early as Nov. 30. If Democrat Mark Kelly wins and is seated, that would narrow the window for McConnell.

Most Republicans concurred on the need for speed and one named a practical reason: The nine-member court, argued Sen. Ted Cruz of Texas, must be full if called upon to decide the outcome of a disputed presidential election.

But Biden and other Democrats said voters should choose the next president, who should, in turn, pick Ginsburg’s successor. Health care, abortion rights and religious freedom are on the line, they said.

Biden, who has run on uniting the country after Trump’s divisive tenure, warned against more upheaval.

“The last thing we need is a constitutional crisis that plunges us deeper into the abyss and deeper into the darkness,” he said. He acknowledged that if Trump wins, his pick should be approved.

But Biden added, “If I win this election, President Trump’s nominee should be withdrawn and as the new president I should be the one to nominate Justice Ginsburg’s successor.”