LOS ANGELES — Crew members of a Southern California dive boat told investigators they were not trained on emergency procedures before a fire broke out last year and killed 34 people, according to federal documents released Wednesday.

Investigators say the cause of the predawn blaze aboard the Conception remains undetermined but a possible ignition point was phones and other electronics plugged into outlets.

One crew member, Ryan Sims, told investigators he saw sparks flash when he plugged in his cellphone hours before the fire.

The boat was carrying 33 passengers on a Labor Day weekend scuba diving expedition last year and was anchored near an island off the Southern California coast. The fire broke out while passengers were sleeping and quickly swept through the vessel.

All of the passengers and one crew member sleeping below deck were killed. The other five crew members, including Capt. Jerry Boylan, survived. They barely escaped after trying in vain to save the others, authorities said. Boylan made a mayday call at 3:14 a.m. saying, “I can’t breathe,” before abandoning ship. 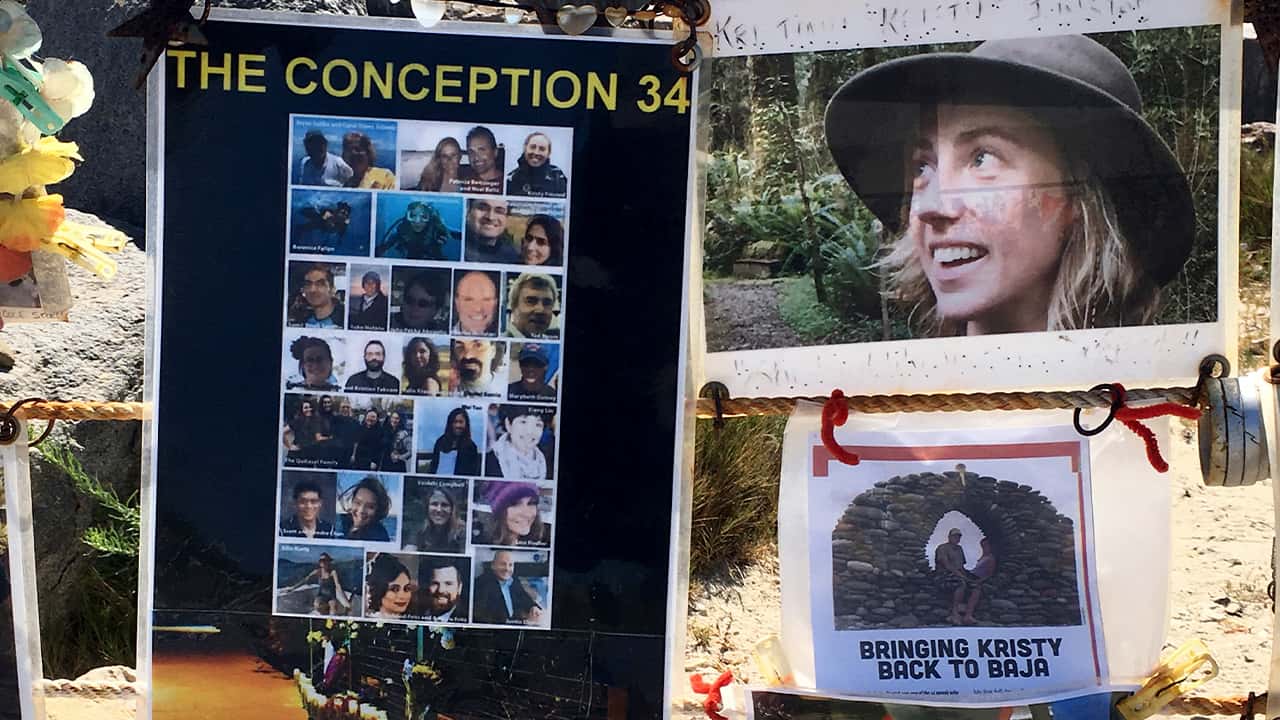 FILE – This July 12, 2020 file photo shows a standing memorial to the people who died aboard the Conception dive boat on Sept. 2, 2019, is seen along the coast near the Santa Barbara, Calif., harbor. The crew aboard a Southern California scuba dive boat had not been trained on emergency procedures before the deadly fire broke out last year, killing 34 people in one of the state’s deadliest maritime disasters, according to federal documents released Wednesday, Sept. 16, 2020. (AP Photo/John Antczak,File)

Hundreds of pages of documents released Wednesday by the National Transportation Safety Board provide a detailed look at the boat’s final hours on Sept. 2, 2019.

Sims, who had only been working aboard the boat for three weeks, told investigators he had asked the captain to discuss emergency plans the day before the fire. Boylan reportedly told him: “When we have time.”

“I didn’t know what the procedures were supposed to be,” Sims said.

Other crew members also said they were not familiar with safety procedures.

Sims said he went to sleep after seeing the sparks, and there is no indication in the documents that he reported what he saw.

Sims broke his leg trying to escape the burning boat and sued the vessel’s owner and the company that chartered it, alleging that the Conception wasn’t seaworthy and operated in an unsafe manner.

The NTSB said all six crew members were asleep when the fire broke out, a violation of Coast Guard regulations that require a roving watch.