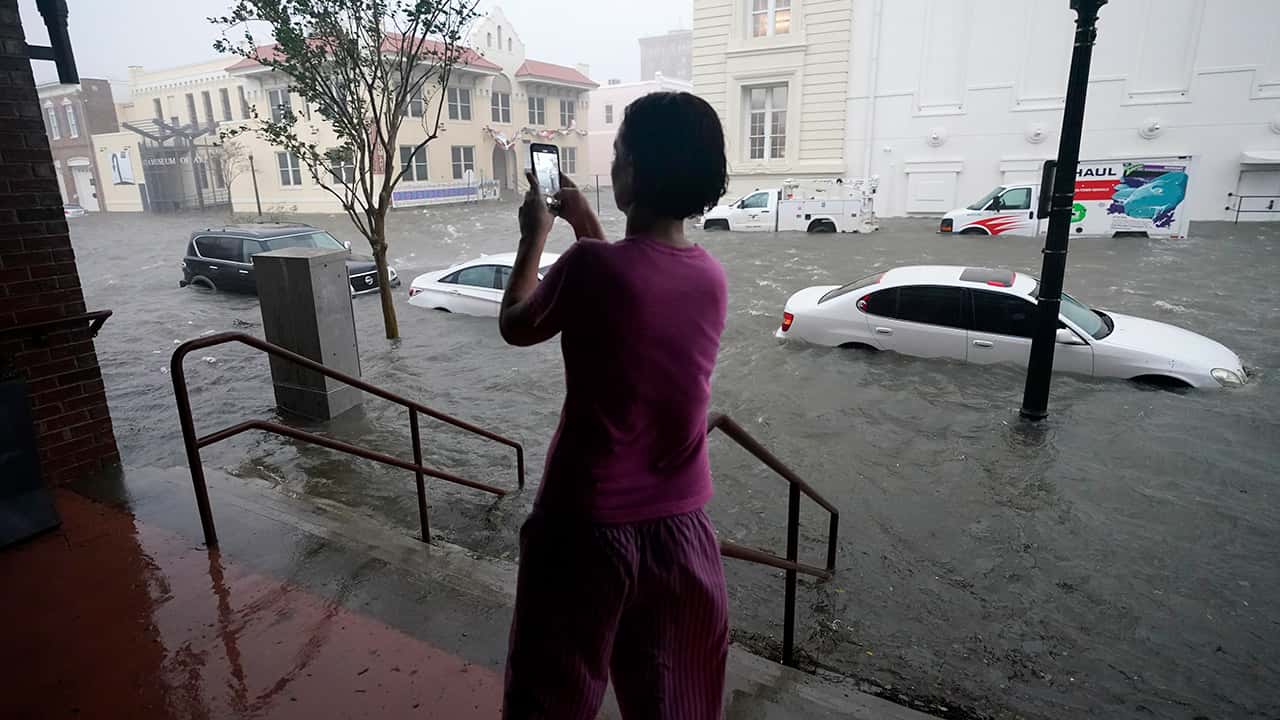 PENSACOLA, Fla. — Hurricane Sally lumbered ashore near the Florida-Alabama line Wednesday with 105 mph winds and rain measured in feet, not inches, swamping homes and trapping people in high water as it crept inland for what could be a long, slow and disastrous drenching across the Deep South.

Moving at an agonizing 3 mph, or about as fast as a person can walk, the storm made landfall at 4:45 a.m. close to Gulf Shores, Alabama, battering nearby Mobile, Alabama, and Pensacola, Florida, two cities with a combined metropolitan-area population of almost 1 million.

Moving at an agonizing 3 mph, or about as fast as a person can walk, the storm made landfall at 4:45 a.m. close to Gulf Shores, Alabama, battering nearby Mobile, Alabama, and Pensacola, Florida, two cities with a combined metropolitan-area population of almost 1 million.

Emergency crew plucked people from flooded homes. In Escambia County, which includes Pensacola, more than 40 were rescued, including a family of four found in a tree, Sheriff David Morgan said.

He estimated thousands more will need to flee rising waters in the coming days. County officials urged residents to stick to text messages for contacting family and friends to keep cellphone service open for 911 calls.

“There are entire communities that we’re going to have to evacuate,” Morgan said. “It’s going to be a tremendous operation over the next several days.”

The storm knocked out power to about a half-million homes and businesses.

It was the second hurricane to hit the Gulf Coast in less than three weeks and the latest blow in one of the busiest hurricane seasons ever recorded, so frenetic that forecasters have nearly run through the alphabet of storm names with 2 1/2 months still to go. At the start of the week, Sally was one of a record-tying five storms churning simultaneously in the Atlantic, strung out like charms on a bracelet. Flood waters move on the street, Wednesday, Sept. 16, 2020, in Pensacola, Fla. Hurricane Sally made landfall Wednesday near Gulf Shores, Alabama, as a Category 2 storm, pushing a surge of ocean water onto the coast and dumping torrential rain that forecasters said would cause dangerous flooding from the Florida Panhandle to Mississippi and well inland in the days ahead.(AP Photo/Gerald Herbert)

Like the wildfires raging on the West Coast, the onslaught of hurricanes has focused attention on climate change, which scientists say is causing slower, rainier, more powerful and more destructive storms.

An emergency crew rescued two people on Dauphin Island, Alabama, after the hurricane ripped the roof off their home and the rest of the house began to crumble.

“As things started to peel off and fall apart, they got scared and called for assistance,” Dauphin Island Mayor Jeff Collier said by phone. He said no one was injured.

In Orange Beach, Alabama, winds blew out the walls in one corner of a condominium building, exposing the interiors of condos on at least five floors, video posted online showed. Other images showed boats shoved onshore by storm surge.

At least 50 people in Orange Beach were rescued from flooded homes and taken to shelters, Mayor Tony Kennon said.

“We got a few people that we just haven’t been able to get to because the water is so high,” Kennon said. “But they are safe in their home, as soon as the water recedes, we will rescue them.”

Street lights were knocked out in downtown Mobile, a city of about 190,000. Trees were bent over as the rain blew sideways in the howling wind. In downtown Pensacola, car alarms went off, the vehicles’ flashing lights illuminating the surrounding floodwaters.

Before sunrise, water was up to the doors of Jordan Muse’s car outside the Pensacola hotel where her family took shelter after fleeing their mobile home. The power failed early in the morning, making it too stuffy to sleep. Her 8-year-old son played with toys underneath the hotel room desk as Muse peered out the window, watching rain fly by in sheets.

“The power trucks are the only ones above water, and they’re the biggest,” Muse said. “I can’t believe it got so bad. That’s why we came here.”

Michele Lamar-Acuff woke to the thud of a small tree falling against a window of her Pensacola home. Waist-deep water gushed down her street. Above the loud whistling of the wind she heard what sounded like transformers exploding.

“I don’t feel safe to leave,” Lamar-Acuff said from the porch of a neighbor’s house. “I’m just staying put and hoping for the best.”

Sally blew ashore as a Category 2 storm but weakened to a still-dangerous Category 1, with winds of 80 mph, by mid-morning. Forecasters warned that heavy rain will continue into Thursday as the storm moves inland over Alabama and into central Georgia.

National Hurricane Center forecaster Stacy Stewart said the rain will be “catastrophic and life-threatening” over portions of the Gulf Coast.

“Sally has a characteristic that isn’t often seen and that’s a slow forward speed, and that’s going to exacerbate the flooding,” said Ed Rappaport, deputy director of the hurricane center. He likened the storm’s plodding pace to that of Hurricane Harvey, which inundated Houston in 2017.

Sally’s effects were felt all along the northern Gulf Coast. Low-lying properties in southeastern Louisiana were swamped by the surge. Water covered Mississippi beaches and parts of the highway that runs parallel to them.

President Donald Trump issued emergency declarations for parts of Florida, Alabama, Mississippi and Louisiana. White House press secretary Kayleigh McEnany said on Fox News Channel that Trump was in contact with the states’ governors and ready to help “in every way possible.”

Hurricane Laura pummeled southwestern Louisiana on Aug. 27. Thousands of people were still without power from that storm, and some were still in shelters.

Meanwhile, far out in the Atlantic Tropical Storm Teddy became a hurricane with winds of 100 mph. It was situated more than 800 miles (1,300 km) east of the Lesser Antilles. Forecasters said it was likely to become a major hurricane, reaching Category 4 strength on Thursday.