Six major wildfires burning in Northern California are creating dangerous smoky conditions for Valley residents, who are urged to stay indoors as much as possible — even if it means the dog doesn’t get walked.

The six fires have already burned over 2,800 square miles — larger than the entire state of Delaware — and aren’t close to being contained, so the thick smoke layer will be with us for a few more days at least.

At this point, it doesn’t matter which way the wind blows in the Valley because we’re surrounded on all four sides by wildfires, said Jon Klassen, director of strategies and incentives for the San Joaquin Valley Air Pollution.

Although the San Joaquin Valley has previously seen spikes in air pollution similar to what is being recorded now, the length of time combined with the severity of the bad air is unprecedented, he told reporters Monday morning during a Zoom media briefing.

Right now, a high pressure system parked over the Valley is acting like a lid to hold the smoke from the nearby Creek and SQF Complex fires on top of Fresno, Clovis, and Madera, Klassen said.

The high concentration of smoke is expected to continue to Thursday or Friday, when breezes may blow smoke from those fires eastward, he said.

The higher the concentrations of smoke, the more hazardous the air, said Jaime Holt, spokeswoman for the air district.

Most of the Valley on Monday morning except for the Bakersfield area was well above the threshold for level 5, the most severe level, and anyone exercising outdoors — whether running, bicycling, or doing other strenuous activities — is putting their health at risk, Holt said.

Anything above 75 micrograms per cubic feet of air is dangerous for people to spend time outdoors, especially if they are exercising, and the readings in recent days have been four times the 75 microgram threshold, she said.

If you do go outside, be sure to wear a mask. Farm workers and others who are employed outside should make sure they are provided an N95 mask or a comparably tight-fitting facial covering, Holt said.

Under CAL/OSHA regulations, employers are required to provide N95 or equivalent face masks to outdoor workers to protect them from wildfire smoke.

Outside, the paper medical masks and cloth masks such as bandannas that many people have worn as a shield against the coronavirus are insufficient as smoke barriers, said Heather Heinks, spokeswoman for the air district.

N95 masks filter more of the noxious materials from the air, but aren’t a complete barrier. So the best advice, especially for those with heart or lung problems, is not to go outside, Heinks said — “not even to do a quick walk of the dog.”

But if you don’t have an N95 mask and you must go out, then some facial covering is better than none, Holt said.

Indoor air purifiers provide some relief, although those who don’t own one and who are particularly susceptible to smoke are even wearing face masks indoors.

Residents should check their HVAC air filters and change them as necessary, and same for vehicle air filters, Heinks said.

Some residents may even want to consider heading to an indoor shopping mall, where the air is filtered, to get some relief from smoky interiors, she said.

Children and the elderly are particularly at risk from smoky air, said Dr. Anil Ghimire, associate professor of UCSF Fresno and
medical director of the Chronic Lung Disease Program at UCSF Fresno.

The tiny particles of smoke enter the lungs and stimulate the immune system, which for young children is still developing, he said. As a result, their immune systems might develop to put them more at risk for an allergic disease such as asthma.

Older people also are at higher risk because they may have a chronic illness such as COPD or heart disease that already affects their ability to breathe easily, Ghimire said. When smoke particulates go from the lungs into the bloodstream, the resulting inflammation further stresses their bodies, he said. 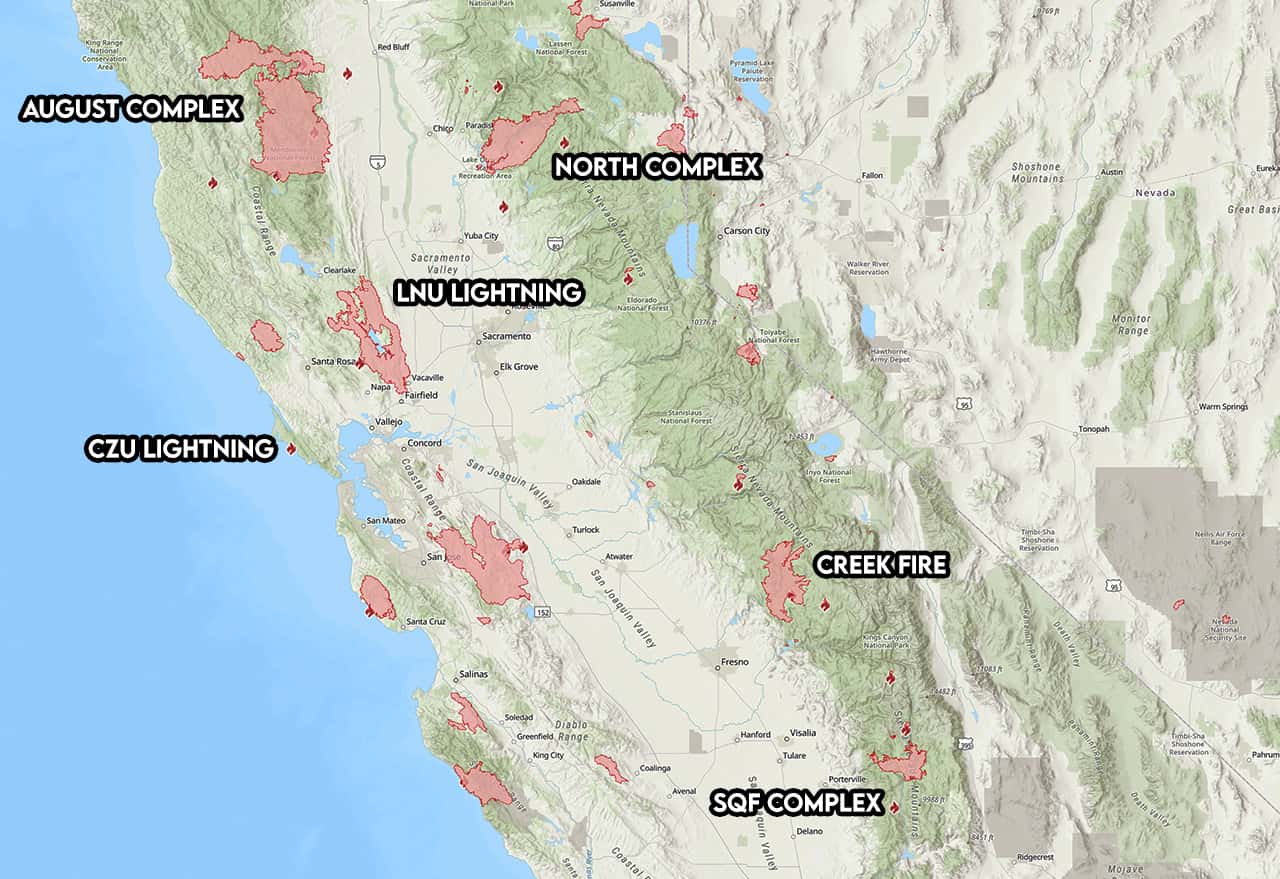 Monitoring stations operated by the air district’s  Real-time Air Advisory Network (RAAN) track the amount of PM 2.5 particulate matter as well as ozone in the Valley, ranking air quality as ranging from green (for good) to purple (for godawful). And we are deep into the purple these days, with PM 2.5 readings topping 300 micrograms per cubic feet of air.

In Oregon, the smoke is so severe that residents are being warned not to vacuum indoors so as not to stir up smoke particles that have settled inside, and not to drive because visibility is so low. 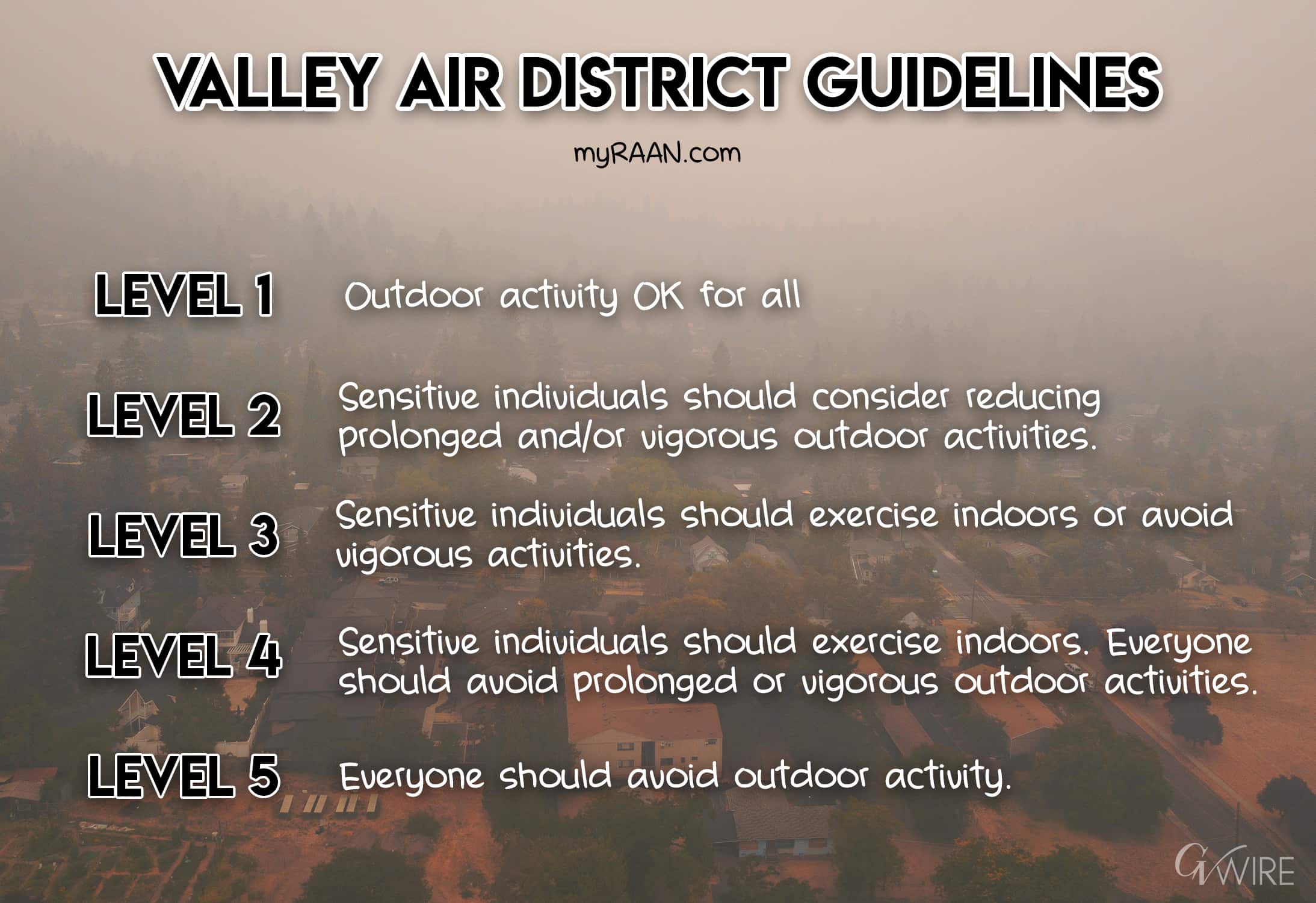