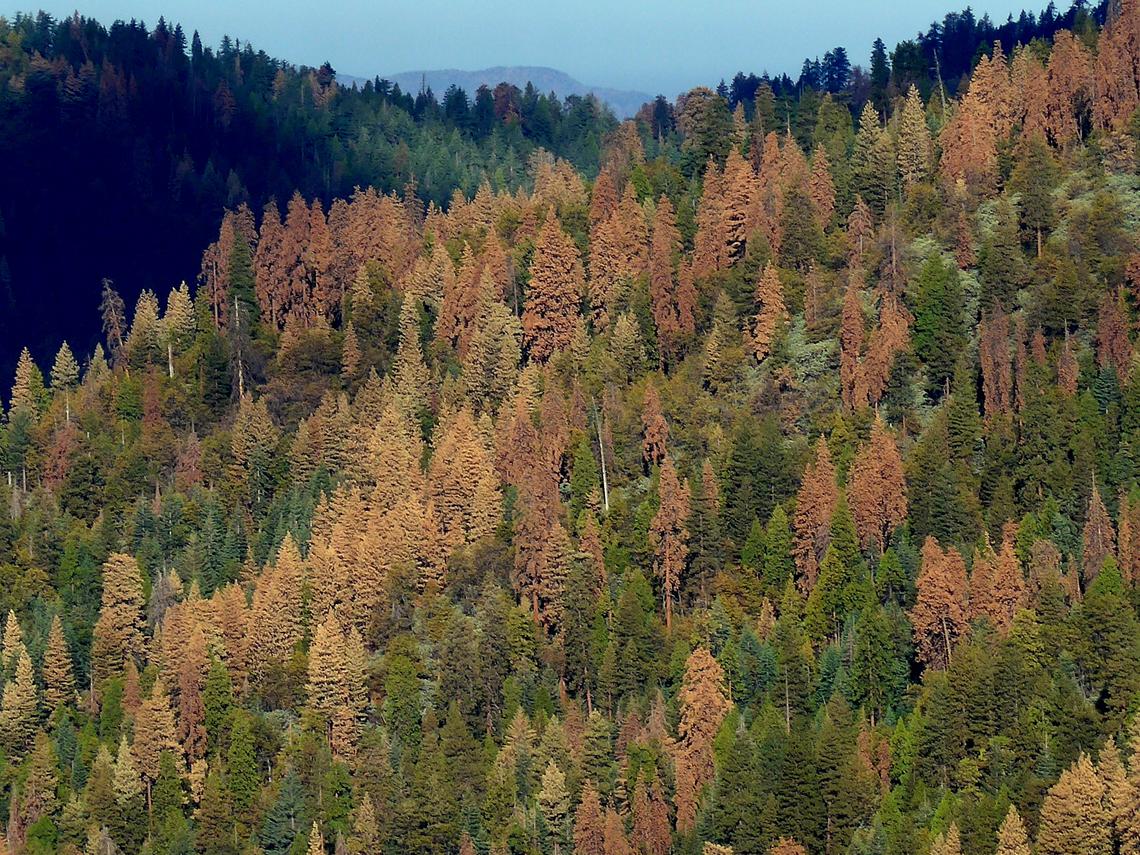 The U.S. Forest Service estimated in early 2018 that more than 147 million trees had died across 9.7 million acres of federal, state, local, and private lands in California during the drought.

Collins, a company that produces hardwoods, softwoods, and pine particleboard says there are enough dead trees in California to “fill the Rose Bowl 520 times with logs.”

In the previous two years, federal, state, and local partners had felled 1.5 million dead trees, primarily those posing the highest hazards to life and property.

Collins, a company that produces hardwoods, softwoods, and pine particleboard says there are enough dead trees in California to “fill the Rose Bowl 520 times with logs.”

The National Association of State Foresters says that fire seasons last 78 days longer on average than they did in the 1970s, and are projected to grow hotter, more unpredictable, and more expensive still.

Over the last few decades, the portion of the USDA Forest Service’s total budget dedicated to fire has grown from less than 20% to more than 50%.

This year, $2.25 billion for wildfire suppression is available to the USDA and the Department of the Interior. This budget authority will increase by $100 million each year, ending at $2.95 billion in fiscal year 2027. President Trump signed an executive order in 2018 in an effort to help manage forests better in hopes of alleviating fire danger.

Sierra Nevada tree cutters say the Forest Service is getting better about letting them remove dead and dying trees, but they’ve still having to leave jobs incomplete due to lack of funds. One even had his own method of drawing attention to the issue.

One Huntington Lake cabin owner tells GV Wire℠ there’s now one person running the permitting office that’s already made a huge difference, and she’s been publicly lauded as a result. 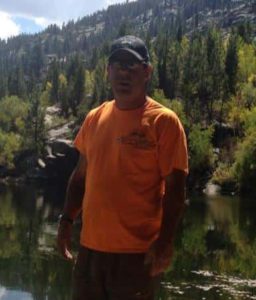 “I wanted to show the Forest Service and everyone up there exactly how much material was dead on the ground. I would stage them (felled trees) in a log deck so it was totally noticeable how much was actually dying.” — Niles Kant, Huntington Lake Tree Service owner

“Little by little I learned more and more. I became a person that could take down just about any tree,” Kant told GV Wire℠ by phone.

Kant has a “can-do” attitude and positioned himself to be in the right place at the right time.

“I got really lucky. One of the cabin owners at Huntington came up to me and helped me got onto the (Southern California) Edison contracting list for tree removal because he knew the president of the company. I started work that day,” said Kant.

That was about five years ago, and Kant has seen the process for removing trees evolve.

“It’s changed quite a bit,” says Kant. “At the beginning it was tough. The process of getting a tree removal permit was time-consuming and it got even harder because of a change in U.S. Forest Service leadership.”

In the beginning, he was able to take out the tree removal permits on behalf of homeowners. Then he was told that homeowners needed to pull the permit. He suspects he got himself into a bit of trouble when he explained this to homeowners and many of them called the U.S. Forest Service to complain.

For a while, Kant did what he could to try to showcase the problem in a way that everyone could see it.

“I wanted to show the Forest Service and everyone up there exactly how much material was dead on the ground,” said Kant. “I would stage them (felled trees) in a log deck so it was totally noticeable how much was actually dying. That forced the Forest Service to take action and forced them to get a big contract to get the trees removed.”

However, one of these examples may have lost him a contract last year. The Forest Service asked him to remove dead trees in the Rancheria campground at Huntington Lake. He explained to them the contract he was given didn’t provide enough money to remove them all.

“I knocked down every tree I could. We made Rancheria Campground look like a war zone,” said Kant. “I thought that would force the Forest Service into action. What ended up happening, I wound up losing my contract with the campground because that campground never opened up.”

Without the funding to remove the trees, they sat on the ground.

Kant walked GV Wire℠ through the process for a homeowner or cabin owner to get a dead tree removed:

“That process can take sometimes an entire season. On the shorter end, it can be done in a day,” explained Kant. “It depends on who is in that job and how proactive they’re going to be.” Ned Gould has a cabin in the Bear Creek tract of Huntington Lake. “I think the volunteer fire department saved my home (during the Creek Fire,” said Gould from his home in Fountain Valley. Gould bought the cabin about 30 years ago when he fell in love with the area after hiking there.

He’s had his own experience with getting trees removed on his land. One of the trees was struck by lightning, several were dead from the bark beetle. Two other trees are currently marked for removal.

Gould said the process would sometimes take a couple of weeks a few years ago. It also depended on how serious the threat was.

But, he says two or three years ago they made an employee change in the Forest Service office. Gould said that when Tiffany Begaye started as permit administrator from the Sierra National Forest things changed for the better.

“She’s been superb,” Gould said. “She’s up there within a day or two and marks the tree if it’s even questionable.” Begaye was given an award in 2018 by the National Forest Homeowners for her work handling residential permits.

“I suspect her home is threatened down there in Prather, but she’s still been putting out information about how people in Huntington can stay safe,” said Gould.

Before Begaye, the Forest Service had a hands-off approach. That policy comes from Washington.

The price for removing a tree varies depending on the size and proximity to structures. One of the trees Gould had removed about five years ago was $2,500, it was 155 feet high. He also had paid as little as $700 for a smaller tree.

Cal Fire worked to remove dead trees, thin underbrush and completely remove other brush from a 78-acre parcel right next to Shaver Springs in 2019. The goal was to not only enhance forest health but provide a fuel break that will reduce impacts of fire to Shaver Springs, the housing developments of Pine Ridge, Peterson Road, and Cressman. This fuel break was on both federal and private lands. It was scheduled for completion in December of 2019.

Another Cal Fire project along Highway 41 in Eastern Madera County consisted of burning annual grasses to reduce fire hazards and provide a fuel break for nearby homeowners in Coarsegold, O’Neals, and Hidden Lakes. This project was expected to be done by the end of June 2019.