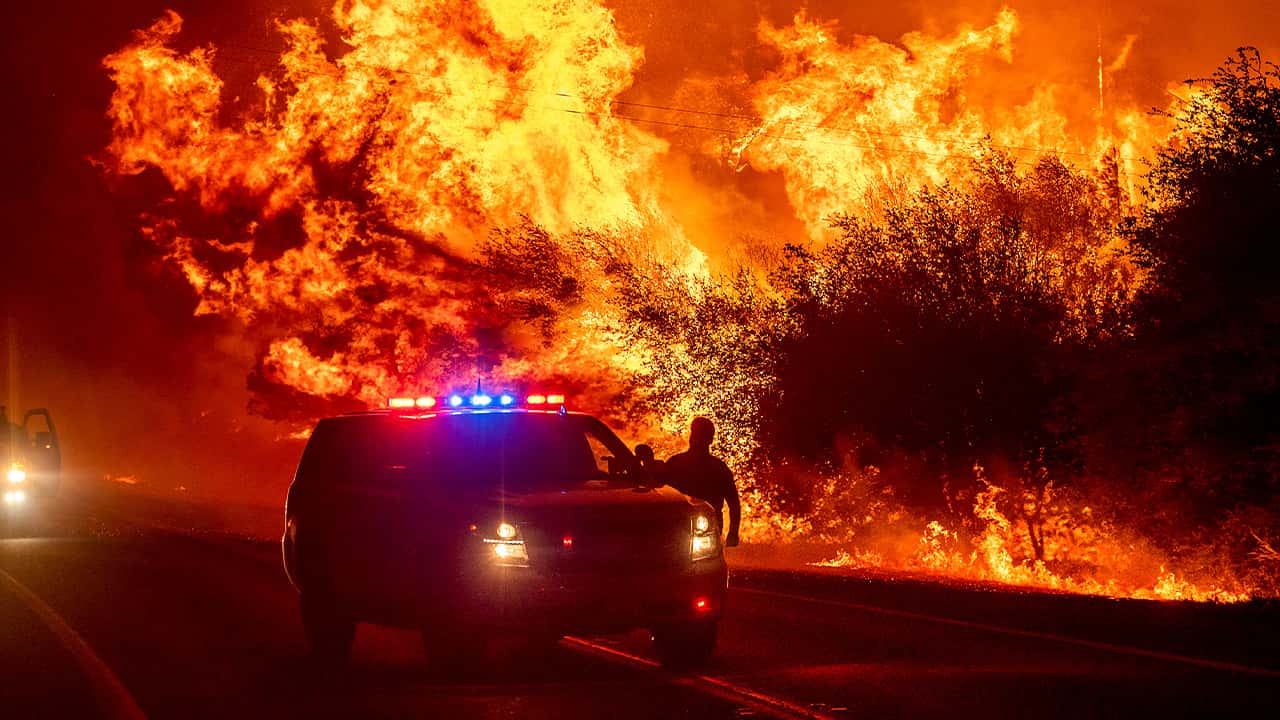 OROVILLE — A Northern California wildfire threatened thousands of homes Thursday after winds whipped it into a monster that incinerated houses in a small mountain community and killed at least three people.

Several other people have been critically burned and hundreds, if not thousands, of homes and other buildings are believed to have been damaged or destroyed by the fire in the foothills of the northern Sierra Nevada, authorities said.

About 20,000 people were under evacuation orders or warnings in Plumas, Yuba and Butte counties.

Another California fire raging along the Oregon border destroyed 150 homes near the community of Happy Camp and one person was confirmed dead, the Siskiyou County Sheriff’s Office said in a statement. About 400 more homes were threatened.

Between Tuesday and Wednesday, the North Complex fire near the small Northern California city of Oroville — which had been burning for weeks in forestland and was 50% contained — exploded to six times its size as winds gusting to 45 mph (72 kph) drove a path of destruction through mountainous terrain and parched foothills.

The winds subsided Wednesday but the fire was only 24% contained and officials said the fire was still very dangerous. Firefighters watch the Bear Fire approach in Oroville, Calif., on Wednesday, Sept. 9, 2020. The blaze, part of the lightning-sparked North Complex, expanded at a critical rate of spread as winds buffeted the region. (AP Photo/Noah Berger)

“Time and time again we have seen how dangerous wildfires can be. … So I ask that you please, please please be prepared, maintain situational awareness and heed the warnings,” Butte County Sheriff Kory Honea pleaded.

Honea announced the three deaths but declined to provide details. California Highway Patrol Officer Ben Draper told the Bay Area News Group that one person was found in a car and apparently had been trying to escape the flames.

Many homes were incinerated in the Butte County hamlet of Berry Creek, with a population of 525 people.

Dozens of evacuees gathered early Thursday at a fairgrounds in the small city of Gridley, trembling in morning cold. Among them was Douglas Johnsrude, 41, who packed up his eight dogs and fled his home in the community of Feather Falls on Tuesday as fire approached.

Johnsrude assumed his house trailer burned, which would be the second time he’s lost his home in a fire. He inherited his mother’s house after her death, but it was destroyed in a 2017 fire.

“The reason I haven’t rebuilt up there is because I knew it was going to happen again. And guess what? It happened again,” he said. “Seeing the smoke and the flames and everything else, it’s unreal. It’s like an apocalypse or something.”

John Sykes, a 50-year resident, managed to flee Berry Creek on Tuesday with his car and some clothes but watched the town burn from about a mile (1.6 kilometers) away. A plume rises from the Bear Fire as it burns along Lake Oroville on Wednesday, Sept. 9, 2020, in Butte County, Calif. (AP Photo/Noah Berger)

“I don’t want to see it,” he said. “That’s why I’m leaving. I never want to see California again.”

The fire also threatened Paradise, the Northern California town devastated two years ago by the deadliest blaze in state history that prompted a deadly traffic jam as panicked residents tried to escape. Eighty-five people lost their lives and nearly 19,000 buildings were destroyed in that fire.

On Wednesday, the sky turned from black to cherry red and ash carried on strong winds rained down in a scene reminiscent from the fateful morning of Nov. 8, 2018, former Mayor Steve “Woody” Culleton said.

“It was extremely frightening and ugly,” Culleton said. “Everybody has PTSD and what not, so it triggered everybody and caused terror and panic.”

Even in the midst of its dry, hot, windy fire season, California has experienced wildfires advancing with unprecedented speed and ferocity.

Since the middle of August, fires in California have killed 12 people, destroyed more than 3,600 buildings, burned old growth redwoods, charred chaparral and forced evacuations in communities near the coast, in wine country north of San Francisco and along the Sierra Nevada. Two spectators watch smoke generated by the Bobcat Fire in San Dimas, Calif., Wednesday, Sept. 9, 2020. Hazy clouds of smoke from dozens of wildfires darkened the sky to an eerie orange glow over much of the West Coast on Wednesday, keeping street lights illuminated during the day and putting residents on edge. (AP Photo/Jae C. Hong)

More Than Two Dozen Major Fires Were Burning Around the State

Thick smoke choked much of the state and cast an eerie orange hue across the sky on Wednesday.

In some areas of the San Francisco Bay Area and to the east in the Sacramento Valley, the smoke blocked out so much sunlight that it dropped the temperature by 20 to 30 degrees over the previous day, according to the National Weather Service.

More than two dozen major fires were burning around the state, some of them among the largest ever recorded in recent California history.

The U.S. Forest Service, which had taken the unprecedented measure of closing eight national forests in Southern California earlier in the week, ordered all 18 of its forests in the state closed Wednesday for public safety.

In Southern California, fires burned in Los Angeles, San Bernardino and San Diego counties. People in foothill communities east of Los Angeles were warned to be ready to flee, but the region’s notorious Santa Ana winds were weaker than predicted.

“We’re encouraged that the wind activity appears to be dying down,” Gov. Gavin Newsom said. “The rest of the week looks a little more favorable.” Jason Anderson, 42, takes pictures as the sun is visible through thick smoke generated by the Bobcat Fire in San Dimas, Calif., Wednesday, Sept. 9, 2020. Hazy clouds of smoke from dozens of wildfires darkened the sky to an eerie orange glow over much of the West Coast on Wednesday, keeping street lights illuminated during the day and putting residents on edge. (AP Photo/Jae C. Hong)

Related Topics:California wildfiresevacuationsfirefightersFires
Up Next

Despite Judge’s Order, Plans Being Made for Census Layoffs